The Roomba e6 and the Roomba 675 are among the iRobot vacuums priced under 300 USD. As it boasts more power, the Roomba e6 also costs slight more than the older 675. Is the small price difference worth it or should you save a smidge instead? We review their features in detail to see which Roomba is the better buy.

While the Roomba e6 and 675 have similar dimensions, but the e6 has a more updated design, better brush rolls, and larger bin capacity

At a glance, the Roomba e6 and the 675 sport the signature iRobot’s round design with the round button on the Roomba’s face. However, their button placements are slightly different, with the e6’s different controls farther apart from the “Clean” button that makes them easier to press than the 675’s, which are closer together. The e6 also has a smaller handle than the 675.

Another major difference between the two is the Roomba e6 has a larger 500mL bin capacity than the 300mL capacity of the 675. As seen in the photo above, the 675’s dust bin mechanism is located at the top while the e6’s mechanism slides out of the Roomba.

Both the Roomba e6 and 675 are equipped with some of iRobot’s patent technologies such as the Dirt Detect and 3-Stage Cleaning System. iRobot’s 3-stage cleaning system “loosens, lifts, and suctions” dirt from the different surfaces of your home. Its Dirt Detect technology can tell if a specific area is dirtier than most surfaces. The Roomba will then work harder on that area to make sure it’s clean before it moves on to the rest of the house.

As the Roomba e6 has more suction power than the 675, it can clean a little faster and with better precision than the 675. The e6 will work slightly better when it comes to pulling in smaller particles compared to the 675, especially when it comes to cleaning hardwood floors. That is not to say that the Roomba 675 is not a good robot vacuum as it still cleans most surfaces effectively. However, compared to the Roomba e6, its power is slightly inferior.

Both Roombas can run for up to 90 minutes and will automatically navigate to their charging dock once done or running low on batteries. However, when they resume, they’ll randomly clean the area as they can’t remember where they left off their cleaning. Also, don’t forget to check the dustbin and empty them when needed.

Both the Roomba e6 and 675 are equipped with sensors that will keep them from bumping into furniture and falling off the stairs. These Roomba vacuums can also roll over low to medium-pile carpets without a hitch. Something that confuses many robot vacuums’ navigation is dark flooring and carpets. Their cliff detect sensors think dark areas are “cliffs” so they will avoid going there to avoid falling. The Roomba e6 and 675 are no exception.

While both the Roomba e6 and the 675 can clean small to medium areas well, these robot vacuums randomly do so. Unlike their top-of-the-line siblings, they don’t have the capability to map your floor area and clean methodically. What’s great about the Roomba e6 is it comes with two virtual wall barriers that you can use to set boundaries around areas you don’t want the Roomba to cover. These areas may include those with lots of wires and cables, sensitive furniture, or pet feeding areas. The Roomba 675 are also compatible with virtual wall barriers, but you’ll have to buy them separately.

The Roomba e6’s dustbin is washable and it comes with a high efficiency filter; both the e6 and the 675 have WiFi connectivity

As both the Roomba e6 and the 675 feature wireless connectivity, they can be set up with the iRobot HOME App. This allows you to schedule a cleaning, view history, or connect your Roomba with your voice assistants for completely hands-free cleaning experience.

Another difference between the two is the Roomba e6 boasts high-efficiency filters. These filters can block off allergens, dust mites, or other allergy-causing particles, a feature that significantly helps if you have pets at home or live with someone with allergies. In addition, the dustbin of the e6 is washable, unlike what’s found in the 675. As replacing filters can be expensive, having a washable dustbin offers significant savings in the long run.

The Roomba e6 offers better value for your money 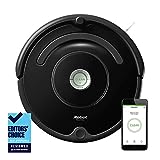 For most households, the iRobot’s entry-level Roomba 675 is a solid robot vacuum choice. With that said, we would opt for the Roomba e6 as it offers 5x more suction power, two virtual barriers, a high-efficiency filter, and a larger dustbin capacity. With all these extra features, their small price difference becomes insignificant. Perhaps the downside to the e6 is it’s only available at Costco. If you’re not a Costco member but want a Roomba with the same features as the e6 minus the added virtual wall barriers, you can get the Roomba e5 instead for the same price.