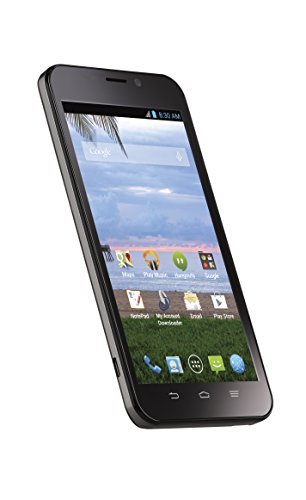 ZTE Quartz is a mid-end Android phone, provisioned with a huge 5.5 inches multi touch capacitive screen, a 1.2 gigahertz Dual-Core CPU, and two cameras, an 8 MP back side camera and a 1 MP front side camera. But let’s get into much more detail.

This cellphone feels a bit heavy comparing to other phones , weighting 6.88 ounces. This phone is available only in black color. This cellphone is quite a compact device, given that it presents a 5.5 inches screen and it is only 6.13″ long. Being just 0.35 inches thick,this cellphone is incredibly slim and comfortable.

ZTE equipped this device with a great performance Dual-Core CPU clocking at 1.2 gigahertz, included in a Qualcomm Snapdragon 200 8610 system chip and 1 GB of RAM memory. Collaborating with graphic calculations, the ZTE Quartz also counts with an Adreno 302 GPU speeding at 400 MHz. A nice point of this cellphone is the 8 GB quite big internal storage and an SD memory slot, allowing you to store a couple hundred games and apps without running out of space.

ZTE equipped this device with a good level 5.5-inches display, and a resolution of 960 x 540 , which makes everything look nice. This display uses IPS LCD capacitive technology, and can detect multi touch gestures.

This cellphone provides wi-fi connectivity (although it can’t provide it to other devices acting as a mobile hotspot) or 3G connection type, supported by EV-DO A technologies. This cellphone doesn’t have a SIM card, because it doesn’t support GSM connections and it works in CDMA carriers.

The ZTE Quartz features two cameras, an 8 MP back camera and a 1 MP front camera. It is capable of shooting 1280×720 HD videos. The camera also has some nice characteristics: auto-focus, flash, geo tagging and face detection shooting.

This cellphone also comes with some interesting features like Bluetooth (4.0), GPS Navigation and NFC (Near Field Communication), and multiple sensors like Light Sensor, Proximity Sensor, Accelerometer and Compass.

This cellphone counts with a 3400 mAh long lasting removable battery that provides this phone a great battery life. ZTE reports a talk time of 18 hs and a stand by time of 384 hours for this device.