The Wacom One and Huion Kamvas 13 are two drawing tablets that share a lot of similarities across the board. For starters, they’re compatible with Android, which is one of their novelty selling points. However, the differences between them become clearer once you take a closer look. We’re here to outline how they compare to each other and help you decide which one will suit you better. 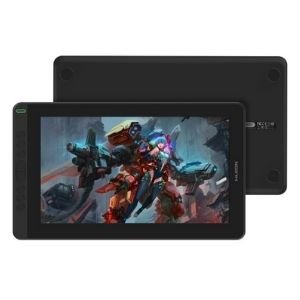 The Huion Kamvas 13 has a laminated display that minimizes the gap between the glass and the screen underneath it.

Full HD, 13.3-inch screens, a contrast ratio of 1000:1—these are some of the similarities you’ll find on the Wacom One and Huion Kamvas 13. The most significant difference is that the latter has a laminated screen, while the former doesn’t. Thanks to that, the gap between the glass and the screen below is reduced. That means the space between your pen tip and the cursor are closer, giving a more accurate feel when drawing.

On paper, the specs of the Huion Kamvas 13’s pen blow the Wacom One’s out of the water.

The quality of the pens of the Wacom One and Huion Kamvas 13 is more or less comparable.

The Huion Kamvas 13’s has double the pressure sensitivity and resolution, but those aren’t all there is to determine pen performance. Still, it’s a whole lot better now compared to earlier models.

In Wacom’s defense, the One’s pen isn’t the Pro Pen 2, which is packaged with pretty much all of its other pen displays. Rather, it’s the kind that uses the same Wacom technology that other manufacturers purchase to use on their products. Think along the lines of the S-Pen on the Samsung Galaxy Note 10. That doesn’t necessarily mean it’s bad. It’s still a decent-performing pen.

The takeaway here is you can expect a jitter-free drawing experience on both the Wacom One and Huion Kamvas 13. 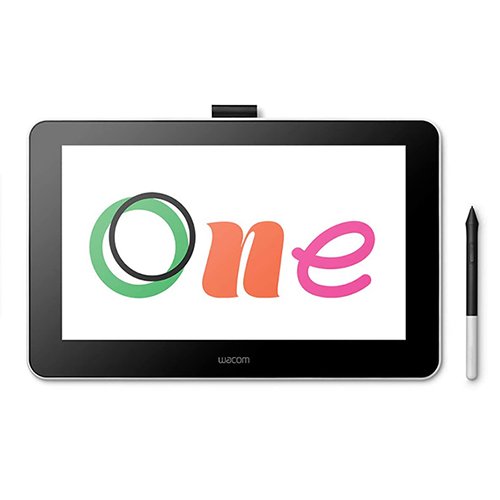 The Wacom One has built-in feet, while the adjustable stand for the Huion Kamvas 13 is sold separately.

When you look at the two, the first thing that’ll probably jump out at you is that the Huion Kamvas 13 has shortcut keys, while the Wacom One doesn’t. These are customizable to boot, so you can set them to change brush size and more.

Now this wouldn’t be a problem if Wacom included its ExpressKey Remote in the package, but it didn’t. Even though it’s expensive, that dedicated controller is worth having because of how handy it is. Higher-end models come with it out of the box, for the record. The Wacom One does have a built-in stand that can be set at a comfortable 19 degrees, so there’s that.

Meanwhile, Huion didn’t equip the Kamvas 13 with a stand. It didn’t include one in the box either. However, you can purchase one separately. As for the stand itself, it’s adjustable and supports multiple angles. It feels somewhat limited, but it still offers more options than the Wacom One.

Just because you can connect the Wacom One and Huion Kamvas 13 to your Android device, doesn’t mean you should.

Arguably one of the biggest draws of the Wacom One and Huion Kamvas 13 is you can use them with your Android device. It’s novel, fascinating, and innovative—at first.

To begin with, they don’t exactly play nice with all Android smartphones and tablets. You’ll need a high-end device to get a good experience out of it. Again, the Samsung Galaxy Note 10 will fit the bill, but it already does come with its own stylus. In that case, the only purpose of the pen displays will be is to provide a larger display to work with.

Setting things up is wonky too. You’ll have to fumble in the menu to get them to work. On top of that, connection could be an issue as well. Neither come with a cable to connect to an Android device, so you’re on your own.

It doesn’t even end there. Even if you do manage to set things up correctly, your controls are limited. Pinching to zoom and things like that are out of the picture (no pun intended). After all, most Android drawing apps are made for touchscreens. It goes without saying that the Wacom One and Huion Kamvas 13 aren’t your typical touch tablets.

In short, the whole Android compatibility thing feels gimmicky, but it’s on the right path. A couple more years down the line, and we’ll probably get a solution that’s more functional and simpler.

The Wacom One is from a well-known brand, but the Huion Kamvas 13 really stepped up this time around.

When it comes to drawing on them, the two perform more or less the same. That means the determining factors are the other features and details. At that, the Huion Kamvas 13 comes out on top here. It has shortcuts keys, and it’s way more affordable than the Wacom One. In fact, even if you add the cost of the Kamvas 13’s adjustable stand to the total, it’s still significantly less.

📌 Is Huion better than Wacom?

Between the Wacom One and the Huion Kamvas 13, the latter comes out on top. It has more features and carries a more attractive price tag.

The Huion Kamvas 13 is a solid drawing tablet that’s not only well-designed, but makes drawing on a tablet a tad easier with its shortcut keys.

📌 Do Huion tablets work with laptops?

Yes, you can use your Huion drawing tablet with a laptop. Some models, like the Huion Kamvas 13, are even compatible with Android smartphones.

📌 Does the Wacom One work without a computer?

The Wacom One needs a computer or at least an Android device to work. The same goes with the Huion Kamvas 13.

RELATED  Wacom One vs Cintiq (2020): Which Pen Display Should You Buy?