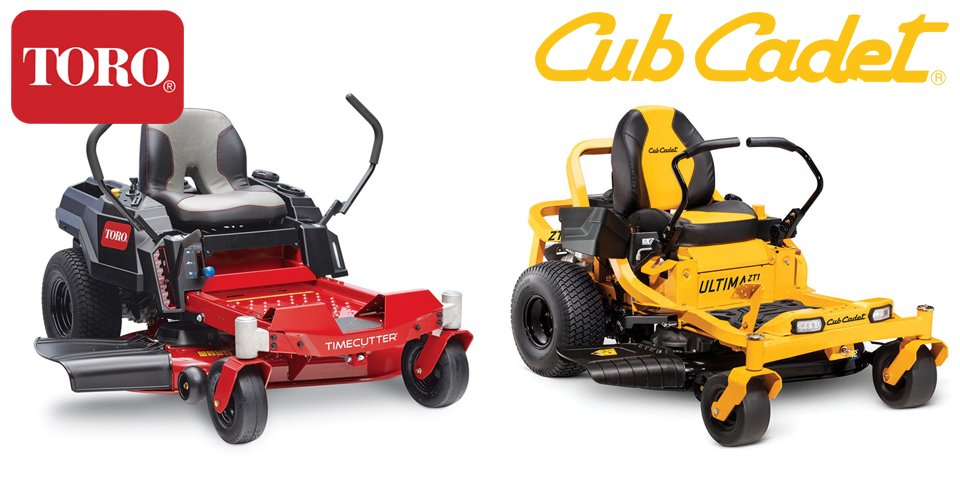 If you’re in the market for a zero-turn riding lawnmower, two big names to consider are Toro and Cub Cadet. These companies sell high-quality zero-turn lawnmowers from residential models to professional-grade lawnmowers. Today we’re going to be comparing two popular 42-inch residential models: the Toro TimeCutter ZS 4200s and the Cub Cadet Ultima ZT1 42. We’ll dive into the details about build and design, performance, and available accessories to help you make a purchase decision between the two.

The Toro TimeCutter and Cub Cadet have essentially the same design flow.

The Toro TimeCutter ZS 4200S is built on a heavy-duty 10-gauge unibody steel frame. The mower’s engine sits at the back, right behind the driver seat, and is protected by a rear engine guard. Underneath the engine, you’ll find the mower’s transmission attached to the rear tires and the cutting deck in front of that. When you flip the seat forward, this reveals your battery, fuel tank, and a few other electronics. In front of the driver seat, you get a non-slip floor pan where you can rest your feet while driving the mower. In front are two small wheels that move freely with the lawnmower.

The Cub Cadet Ultima ZT1 42 has essentially the same design flow. You have the engine at the back sitting above the transmission and main tires, a driver seat in front of the engine, a floor pan with your cutting deck underneath it, and two small tires in front to help keep the mower balanced. The Cub Cadet, however, has an open-frame design and hinged floor pan which allows you to easily access your engine and deck. With this open design, you’re also lacking an engine guard and fenders to keep the mower clean when mowing through wet grass. But one useful feature the Cub Cadet Ultima is equipped with is two LED headlights to increase visibility when you’re cutting in low light.

Both the Toro TimeCutter and Cub Cadet Ultima have padded high-back seats that can be adjusted forward and backward for optimum comfort. On the Cub Cadet, you can purchase two types of armrests that can be installed on the seat.

While the Cub Cadet Ultima has a much larger engine than the Toro TimeCutter, controls and cutting deck specs are quite similar.

The Toro TimeCutter ZS 4200S is fitted with a Toro 452cc gasoline engine and a dual hydrostatic transmission. This engine gives the Toro lawn mower a top speed of 5.5 miles per hour. The engine is protected with a heavy-duty steel guard that protects it from branches and other debris that might cause damage. Engine fuel is stored in the Toro’s 3-gallon translucent tank located underneath the driver seat.

Both the Toro TimeCutter ZS 4200S and the Cub Cadet Ultima ZT1 42 have lap bar controls. To operate the machine, you first pull the lap bars together in front of you, this releases the parking brakes, then you push both bars forward to propel the mower forward and pull them back to reverse. If you want to steer your mower to the right, pull the right-hand bar backward and push the left-hand bar forward. This steering system allows your mower to make zero-degree turns.

On the Toro TimeCutter, you get Toro’s Smart Speed Control System. This allows you to choose between a low range trim speed, medium rage tow speed, and a high range mow speed for cutting large areas quickly.

The Toro and Cub Cadet mowers in this comparison both carry 42-inch steel cutting decks with twin blades. These cutting decks are engaged with an electronic switch (PTO). One difference in the cutting deck between the two mowers is that the Toro has two rollers on the front of its deck while the Cub Cadet has four rollers, two in front and two at the back.

The Toro TimeCutter’s cut height can be adjusted from 1-inch to 4.5-inches using a height control lever beside your speed control. On the Cub Cadet Ultima, you have a pedal to lift the deck from the ground and a twist dial on the left of the driver’s seat to adjust the cut height from 1-inch to 4.5-inches. The twist dial will only work when your foot is pressed against the lift pedal.

Cleaning the cutting deck on both these mowers is quite easy. They come with washout ports where you can attach a hose and run water through the inside of the deck. This eliminates the need for you to flip the deck over and hose it down to remove any debris that might have gotten caught inside.

Both Toro and Cub Cadet offer quite a number of accessories and attachments for the TimeCutter ZS 4200S and the Ultima ZT1 42.

Toro and Cub Cadet sell quite a few accessories and attachments for the Toro TimeCutter and the Cub Cadet Ultima. Some of the accessories Toro sells are a cargo carrier, twin bagger for lawn clippings, anti-vibration floor mat, an hour meter to help you maintain your machine at proper service intervals, a deck lift pedal, and Brinly-Hardy attachments like a cart, lawn sweeper, dethatcher, and more. Cub Cadet sells plow blades, mulching kits, fender kits, armrest kits, haulers, double baggers, tire chains, and more for their Ultima mowers.

The Cub Cadet Ultima ZT1 42 takes the win when it comes to brute force, but the Toro TimeCutter ZS 4200S has a more refined performance.

Choosing between the Toro TimeCutter ZS 4200S and the Cub Cadet Ultima ZT1 42 isn’t a simple task. Both zero-turn lawnmowers are excellent choices if you want to invest in a machine that will keep your yard in pristine condition while saving you time and energy.

The Cub Cadet Ultima does come with a significantly larger engine, which will come in handy if you have a hilly property that you need to regularly mow, or if you’re planning to use the lawnmower to plow and tow besides mowing your lawn. With the Ultima ZT1’s open-frame design, you get easy access to your engine and areas you need to do maintenance on. However, because of this, you also lack some protective features like an engine cover and fenders. Cub Cadet makes up for that though, by adding LED headlights and providing a lot of different attachments you can purchase for your Ultima ZT1.

The Toro TimeCutter, on the other hand, doesn’t have the same brute force the Ultima has, but it is more refined when it comes to drivability and mowing performance. This might be due to the fact that Toro has been manufacturing lawnmowers longer than Cub Cadet has, so they had more time to refine the little details to make a zero-turn lawnmower that performs superbly.

📌 Does Toro have diesel lawnmowers?

Toro has a few diesel lawnmowers on its commercial-grade lineup like the 7000 series.

📌 What type of fuel can I use with the Cub Cadet Ultima?

Any ethanol-gasoline blend up to E10 should work well with the Cub Cadet Ultima ZT1.

📌 How long is the warranty of the Toro TimeCutter?

The Toro TimeCutter has a limited 3-year warranty.

📌 Where can I service my Cub Cadet Ultima?

There are dozens of local dealers and service centers across the country. You can use Cub Cadet’s service locator on their website.

RELATED  DuroMax vs Predator Generator (2021): Which Portable Generator Should You Get?