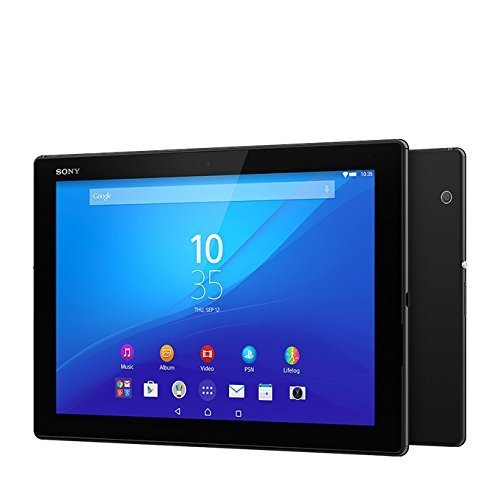 Sony Xperia Z4 Tablet is a powerful Android tablet, counting with a large 10.1 inches multi touch screen, a 64 bit Octa-Core processor (composed by a Quad-Core at 2000 MHz and a Quad-Core running at 1.5 gigahertz), and two cameras, an 8.1 megapixels back-facing camera and a 5 MP front camera.

Sony decided to equip this tablet using an exceptional 64-bits Octa-Core CPU (as a matter of fact it’s really a Quad-Core running at 2 gigahertz and an extra Quad-Core speeding at 1500 megahertz), packed into a Qualcomm Snapdragon 810 MSM8994 system chip and a big 3 GB of RAM. Graphic intensive games and apps usually uses a lot of processing power, so the Sony Xperia Z4 Tablet has an additional 600 megahertz Adreno 430 graphics processing unit to unload the CPU. This tablet counts with a impressive 32 GB internal storage and an external memory card slot, allowing you to install tons of applications, games, pictures and videos without worrying about filling the tablet.

This device is for sale in 2 color options, black and white. The Sony Xperia Z4 Tablet feels much lighter than what you would expect from a tablet of this size. This tablet is a very compact tablet, given that it presents a 10.1″ display and it’s only 10 inches long. This tablet is incredibly thin, with a thickness of just 0.24″. Talking about its construction quality, this tablet is mainly made with Stainless Steel.

This device has WiFi connectivity (and it can provide it to other devices around, as a mobile hotspot), 4G (LTE) high speed connection type or the fastest 3G connection type, supported by HSPA, HSUPA, UMTS and EDGE technologies. This tablet doesn’t use a SIM card, because it’s not a GSM enabled tablet.

The Sony Xperia Z4 Tablet uses an amazing 6000 mAh non-replaceable battery, enough to provide this tablet with an incredibly long battery duration. An issue to take into consideration is that this tablet’s battery is non-removable so you can’t buy a new battery when it begins to last shorter, while with its 6000 mAh you will probably replace this tablet before that happens.

The Sony Xperia Z4 Tablet also features many interesting features like Bluetooth (4.1), FM Radio, GPS and NFC (to trigger actions, transfer data or make payments by holding your device close to another NFC device or tag), and some sensors likeLight Sensor, Accelerometer and Compass.