Gone are the days when the dream of playing music across your home meant tons of wires and plenty of cash. This is largely due to the success of multi-room audio specialists offering wireless solutions, including arguably the most recognizable brand, Sonos. Known best for their indoor speakers, Sonos has begun venturing into portable solutions, too. Released last September, the Sonos Move is the first portable Bluetooth speaker from the brand.

With the company’s announcement of the Sonos Five—a high-fidelity speaker poised to replace the Sonos Play:5—it’s time to take a look at how it will compare to the brand’s first portable model. Here, we give you a rundown of the Five and the Move’s best features. 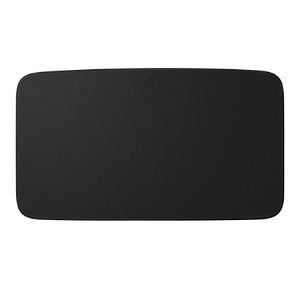 The Sonos Five and the Sonos Move are handsomely minimalist speakers that blend seamlessly with their surroundings.

Sonos has always adhered to a minimalist aesthetic. So regardless of the obvious difference in form between the Sonos Five and the Sonos Move, you’ll find both speakers are designed with sleek lines and rounded corners, allowing them to blend effortlessly with the surroundings. They also feature tastefully inconspicuous touch-capacitive controls on their top panels, ensuring a streamlined body all throughout.

Although advertised as a portable speaker, the Sonos Move is on the larger end of the size range. Moving it freely around the house is still easy, thanks to a built-in handle at the back. The upcoming Sonos Five also sports a versatile design, so you can use it in both vertical and horizontal orientations depending on your preferred audio setup.

Built for portability, the Move comes with a durable exterior shell and an IPX56 rating that makes it resistant to water, dust, and other elements. It’s also touted as a shock-resistant speaker, so you shouldn’t worry too much about tumbles as you carry it around. However, you wouldn’t want to leave this speaker outside in the rain or submerged in a pool. While not as weather- or shock-resistant as the Move, the Sonos Five is humidity-resistant. This should appeal to audiophiles who need music even inside the bathroom.

The Sonos Five is the superior speaker although the Move’s sound output is more than capable of cutting through background noise.

Poised to replace the Play:5, the Sonos Five retains much of its predecessor’s features and specs. There are still six Class-D digital amplifiers, three tweeters, and three mid-woofers. The drivers also come in the same phased array for a wide stereo soundstage, while the left and right tweeters are in horns to deliver a more expansive audio performance. Given the identical specs of the Play:5 and Sonos Five, expect the newest model to blast powerful, room-filling sound with fluidity, fidelity, and a lot of bass.

The Sonos Move, on the other hand, packs plenty of punch for a portable speaker. Designed to work in all types of environment, it shares the same audio components as the smaller Sonos One. However, the Move comes with a downward-firing tweeter and forward-firing woofer to help it cut through ambient noise. The result is a 360-degree sound output that’s surprisingly loud albeit harsh at higher volumes. Nonetheless, the base gets a bit of a push on the low end that should come in handy during outdoor use. 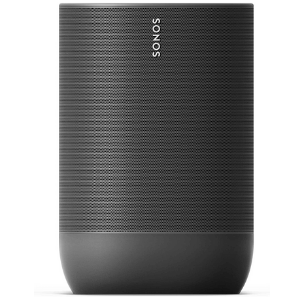 Check Price on Amazon Check Price at Sonos.com
We are reader supported. When you buy through our links we may earn an affiliate commission.

The Sonos Move boasts of built-in voice control and Auto Trueplay while the Sonos Five comes with a orientation-based stereo pairing.

Given that they share the same DNA, the Sonos Move and the Sonos Five both benefit from the brand’s impressive wireless technology. With the Sonos Move, you also get the perks of hands-free control via the built-in Amazon Alexa and Google Assistant. Keep in mind that the voice assistants can only be accessed in Wi-Fi mode, and not while you’re connected via Bluetooth.

While you can’t set up alarms or get weather updates from the Sonos Five, it does come with a smart stereo sound. Pair two Sonos Five speakers and the set-up will smartly adjust to mono for a more detailed stereo separation. On its own, and positioned horizontally, the Sonos Five will automatically separate left and right channels.

Setting up the two models should be easy given the user-friendly interface of the Sonos app. EQ settings are both adjustable through the platform as well. For iOS users, the Sonos app also comes in handy because of the Trueplay feature. The software essentially uses your iPhone’s mic to tune your speakers according to the layout of the room. With the Move, it’s even easier. The portable speaker’s built-in mic can automatically calibrate the sound output to match your environment.

The Sonos Move comes with a wireless charging base while the Sonos Five retains the line-in 3.5mm jack for greater compatibility.

For true integration, the Sonos Five has also retained the line-in 3.5mm jack. This means you’re not limited to streaming services, and can easily connect the speaker to a turntable, CD player, or even a projector. On the other hand, the Sonos Move boasts of a sleek, circular wireless charging base that keeps the speaker stable. If you’re taking it on the road or using it outdoors, you can opt to charge the Move using the regular USB-C port instead.

The Sonos Five is for consumers serious about building a wireless home audio system while the Sonos Move fits casual buyers looking for smart features in their speakers.

Check Price on Amazon Check Price at Sonos.com
We are reader supported. When you buy through our links we may earn an affiliate commission.
Deal Finder

The Sonos Five is practically identical to the Play:5 and should appeal to audiophiles looking for wireless high-fidelity speakers with scale, power, and volume. If you’re serious about building a multi-room audio system in your home, then the Five should be the centerpiece. It’s a big and bold wireless speaker that’s more than capable of filling a room with sound.

On the other hand, the Sonos Move is ideal for casual users looking for an entry-point into the Sonos ecosystem. As the brand’s first foray into portable speakers, the Move adds more value to the category by doubling as a wireless home smart speaker. While it’s certainly not as powerful as its larger siblings, it doesn’t scrimp on overall quality either.

RELATED  Sonos Move vs Bose Revolve Plus (2021): Which Portable Smart Speaker is Better?