The Sonos Beam Shadow Edition and the Sonos Beam look very similar at a glance, but they do have a couple of differences. While they are both entry-level smart soundbars released by Sonos in 2018, the Shadow Edition is sold by membership stores at around 100 USD cheaper than the . What exactly is the difference between the two smart soundbars and which one should you get? We hone in on their similarities and differences to help you decide. 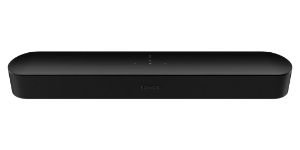 Check Price on Amazon Check Price on Sonos.com
We are reader supported. When you buy through our links we may earn an affiliate commission.

The Shadow Edition and Beam offer different color options, but they have the same dimensions and weight

Both the Shadow Edition and the Beam smart soundbar sport a sleek, minimalist design with a cloth grille on the front. They have the same dimensions and weight and both can fit in between the TV’s legs without problems. Both soundbars are wall mountable, but the wall mount should be bought separately as a purchase of either Beam editions doesn’t come with a wall mount.

Where they differ is the color and the finish. Gray is the only color option for the Shadow Edition, a special version designed specifically for membership stores such as Costco and Sam’s Club. Meanwhile, you can get the from Sonos or most retailers in either black or white. You will also notice that the Sonos logo in the Shadow Edition is darker than the one found in front of the Beam. As for their finish, the feels a bit more premium than the Shadow Edition.

They have the same set-up process and controls–touch, voice, and app controls—but the Shadow Edition comes with a longer power cord

While they don’t come with a physical remote control, your Sonos speakers can be synced with your TV’s remote control or you can easily use the app to manage your TV and soundbar. Both the Beam Shadow Edition and the Beam have responsive touch-capacitive controls at the top of their panels for basic controls as well. For those with an Apple ecosystem, they can also be connected to AirPlay 2.

Check Price on Amazon Check Price on Sonos.com
We are reader supported. When you buy through our links we may earn an affiliate commission.

Both Beam editions are equipped with built-in voice assistants so you won’t have to purchase a smart home assistant separately to be able to use Amazon Alexa or Google Assistant. These smart soundbars are equipped with five far-field microphones so your preferred smart assistant can detect your voice even when music is playing.

Since they both have WiFi connectivity, you can easily stream music straight from your device. Setting up either the Beam Shadow Edition or the regular Beam with other Sonos wireless speakers for a fuller surround sound is also made easy by the Sonos app.

Both the Beam Shadow Edition and the Beam come with the Sonos’ Trueplay technology, Speech Enhancement feature, and customizable EQ settings

When it comes to Sonos’ essential features, the Shadow Edition and the Beam have no difference. They are both equipped with Sonos’ signature technologies such as adjustable EQ, Trueplay tuning, and Speech Enhancement feature. Once you finish setting up your Sonos soundbar, you can further fine-tune the audio quality to suit your room size and your favorite viewing spot through Sonos’ Trueplay tuning. This Trueplay feature detects the sound bouncing off of your walls and furniture through the microphone of your iOS device and optimizes your audio for a quality that’s bespoke to your room and your favorite spot.

Through the Sonos app, you can also adjust the equalizer settings of the Beam Shadow Edition and the Beam to suit your audio quality preference. They also boast a Speech Enhancement feature in the app. This gives better vocal clarity when the decoded sound is softer, such as when the characters in what you’re watching are whispering to each other or when the background sound becomes too loud.

Both the Shadow Edition and the Beam deliver a crisp, clear, immersive sound, but they work best in small to medium-sized rooms

While both are compact wireless speakers, the Beam Shadow Edition and the Beam deliver high-quality audio that significantly improves viewing experience. Once you start watching TV or a movie with a soundbar, it’s hard to go back to just their built-in speakers. There’s no difference between the speaker drivers found in either the Shadow Edition or the regular Beam model.

They both have three passive radiators for better bass, four full-range woofers, one tweeter, and five Class D amplifiers. Where the Beam shines is in vocal clarity, but when it comes to sound effects such as explosions that require deeper bass, you may find either smart soundbars wanting. Once the budget allows, you can pair either Beam with a Sonos Sub for better lows. With that said, they still sound great for their price and offer that crisp audio quality that Sonos hs been known for.

As they offer the same internal drivers, the Beam Shadow Edition offers better value for your money

Check Price on Amazon Check Price on Sonos.com
We are reader supported. When you buy through our links we may earn an affiliate commission.
Deal Finder 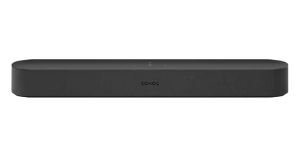 Check Price at Costco Check Price at Sam's Club
We are reader supported. When you buy through our links we may earn an affiliate commission.

If you want your soundbar to either be black or white though and don’t mind paying the extra dollars, perhaps the is better for you. The only edge of the Sonos Beam to the more affordable Shadow Edition is its more premium finish and its color options match more furniture in most houses.