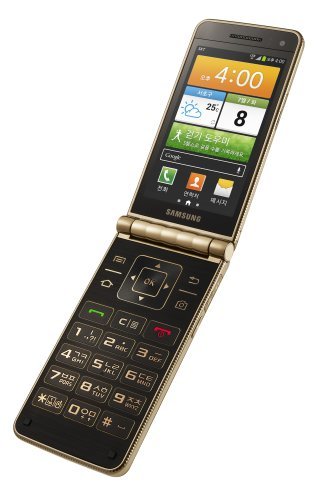 Samsung Galaxy Golden is a solid Android phone, featuring a medium 3.7″ multi touch display, a great performance Dual-Core CPU clocking at 1700 megahertz, and two cameras, an 8 mega-pixels back camera and a 1.9 megapixels front side camera. We will get a better idea about this phone’s pros when we get into deeper details.

Samsung sells this phone in 2 different color options: black and gold. This device is quite thick compared to current devices, being as thick as 0.62″. Samsung forgot about weight optimization in this 6.31 oz cellphone, far heavier than other similar devices.

This phone is equipped with a Qualcomm Snapdragon 400 8930 system chip, backed up by a powerful Dual-Core CPU running at 1.7 GHz with a large 1,5 GB RAM memory. Graphic rendering generally consume a lot of CPU cycles, so this phone also also has an Adreno 305 GPU running at 450 MHz to help with that calculations. A good point of this cellphone is its big 16 GB internal storage memory and an external memory card slot, which allows you to install hundreds of applications and games without any trouble.

The Golden is equipped with a very good 3.7 inches display with a 800 x 480 resolution, making everything look beautiful. This display uses Super AMOLED capacitive technology, and allows multi-touch for gestures like pinch and zoom.

This cellphone has a 1820 mAh medium battery, and though it may look a bit small, the Samsung Galaxy Golden has a great battery life.

This phone provides Wi-Fi connectivity (and it can be shared with other devices acting as a mobile hotspot), 4G LTE fast connectivity and also HSPA+ connectivity, which is a bit slower 4G type or fast 3G internet connection, over HSDPA, HSUPA and EDGE technologies. This phone uses a Micro SIM card for GSM carriers.

The Samsung Galaxy Golden is probably the correct choice for you it doesn’t matter whether you want this phone majorly for social networks, will use it as a work device or will use this phone for playing games.