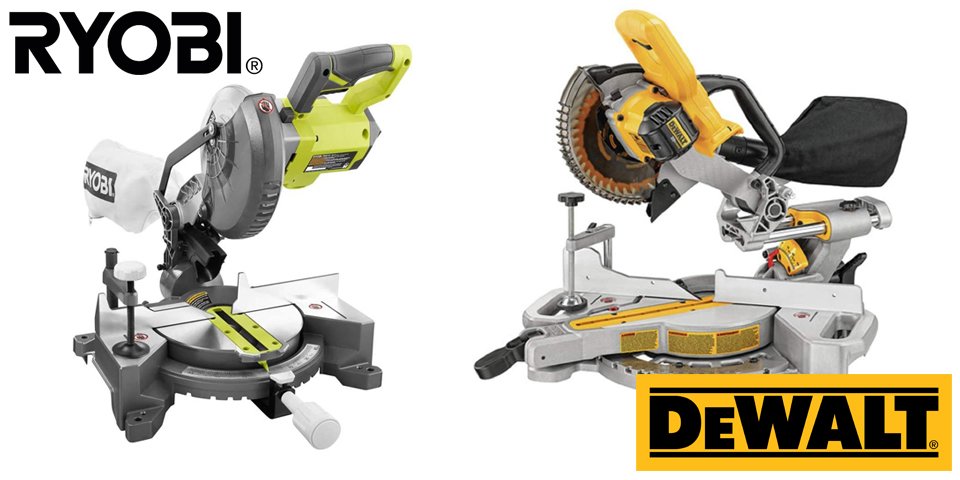 If you’re on the hunt for a cordless miter saw that you can use to make angled and beveled cuts for your home improvement or DIY projects, two models to consider are the Ryobi 18-Volt ONE+ 7-¼ miter saw (P553) and the more expensive Dewalt 20V MAX 7-¼ miter saw (DCS361B). Both miter saws are great for smaller home projects and are more portable and easy to store than larger 10-inch and 12-inch miter saws. Today, we’re going to take a closer look at both of these miter saws to help you make a better purchase decision between the two.

Both the Ryobi and DeWalt miter saws have essentially the same design, except that the DeWalt has a sliding arm for better cut capacity.

The DeWalt 20V MAX is a 7-¼ compound sliding miter saw. This means it can do angled cuts as well as bevel cuts and has a bigger crosscut capacity than non-sliding miter saws. The entire thing weighs 30 pounds and measures 25.25 x 19.88 x 15.69 inches. For portability, you can lock the miter arm down and carry it using its top handle. You’ll also find handles for carrying on each side of the base. Although it is a portable saw, it sits on your workbench very securely even without being bolted down. On the left of the DeWalt miter saw, you’ll find a working clamp. This clamp helps you secure whatever you’re cutting so you can get clean and accurate cuts. At the back of the saw, you’ll find a sawdust port where you can attach your dust bag. You can also attach a vacuum to its dust port for better dust control.

Adjusting the saw angle on the DeWalt miter saw is quick and easy. You simply press a button to unlock it, find the angle you need, and clamp the lever down to secure it. To adjust the bevel on the DeWalt miter saw, simply twist the dial to unlock, adjust your bevel, and twist it in the opposite direction to lock. The sliding arm can also be locked and unlocked by twisting its dial lock.

The Ryobi 18-Volt ONE+ is also a 7-¼ compound miter saw. The main difference is that the Ryobi lacks a sliding arm. Although it is more portable than one with a sliding arm, you also get less cut capacity. This miter saw weighs 21 pounds and measures 20.3 x 13.5 x 12 inches.

Like the DeWalt miter saw, the Ryobi also has a working clamp, a dust port with a dustbag, and carrying handles. It also has a button to release the angle adjustment lock and a twist knob to secure it. The bevel is locked and unlocked by twisting a dial lock.

The DeWalt miter saw has better cut capacity than the Ryobi.

The DeWalt miter saw takes the lead when it comes to features with its integrated cut line cross-cut positioning system.

Both the Ryobi and DeWalt 7-¼ miter saws come with positive stops. These are pre-marked notches that let you lock in the wood for common angles allowing accurate cuts quickly and easily. The positive stops on the DeWalt work excellently. On the Ryobi, however, you will need to double-check your angles before cutting as the positive stops sometimes move when you lock it in place. Both miter saws also have dust collection systems. This is a dust port at the back of the miter saw that you can use to attach the supplied dust bag or your own dust collection device like a wet/dry vacuum.

The DeWalt miter saw has the edge when it comes to features with its integrated cut line cross-cut positioning system. This is a shadow that is cast on your wood so you can see exactly where your blade is going to cut. This works similarly to a laser guide.

The DeWalt miter saw delivers better performance but the Ryobi has the edge when it comes to portability and affordability.

Both the Ryobi 18-Volt ONE+ 7-¼ miter saw and the DeWalt 20V MAX 7-¼ miter saw are excellent miter saws that combine portability and performance. They are the perfect miter saws for cutting trimmings and for other small projects you have around the house.

When it comes to performance, the DeWalt miter saw comes out on top with more power, better cut capacity, and more accurate positive stops. As well as an added cross-cut positioning system. The Ryobi wins when it comes to portability and affordability. It weighs almost 10 pounds less, is more compact, and costs roughly ¾ the price of the DeWalt miter saw. So making a purchase decision between these two miter saws will really only depend on what you are looking for in a miter saw.

📌 Where can I purchase a DeWalt 20V Max battery pack?

The DeWalt 20V Max battery packs are widely available in local hardware stores as well as online retailers like Amazon.

📌 What are the common miter saw blades?