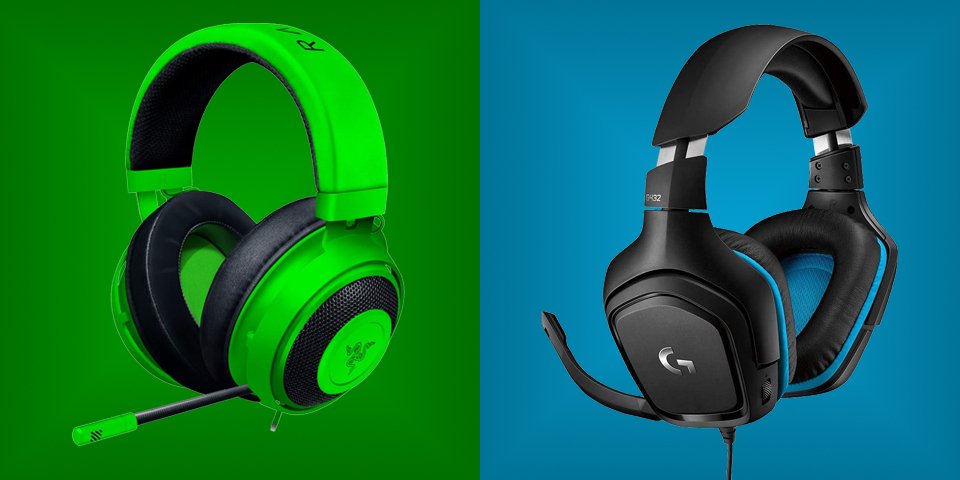 The brands Razer and Logitech are synonymous with gamers all over the world and have been at the forefront of producing some of the best gaming peripherals.  When it comes to gaming, being labeled as the ‘best’ is an achievement that is hard to beat. Gamers are extremely finicky when it comes to the equipment they use, and this is especially true of their gaming headsets.

This leads us to examine two of the best gaming headsets available today, the Razer Kraken T.E. and Logitech’s G432. The Singapore-born Razer and the Swiss company Logitech are both titans in the gaming industry, and their products are both class-leading and expected to perform well. Let us take a side-by-side look as to what makes these headsets the game changers that they are for today’s e-sports arena.

There is no mistaking their gaming pedigree.

While both of these headsets are marketed as ‘budget’ gaming headsets, their features are anything but that. Both sport 50mm drivers that allow for full ear enclosure when gaming. This allows for a more immersive audio experience both for gaming and listening to media. While the Razer weighs considerably less than the G432 at 11.4 ounces, they are still both under 20 Ounces which is relatively light for true 7.1 surround gaming headsets.

Both headsets are built with high-quality ABS plastic common to headsets at this price range. The workmanship on these headsets is immaculate, no discernible gaps and loose parts are present on the joints. In terms of aesthetics, the Kraken is a loud bright green color (in true Razer fashion) with round edges and no angles. The Logitech is made to be much more angular in its approach, with muted matte black and blue edging on the cups. They may be shaped differently, but one look reveals their gaming-centric tendencies.

They are not to be worn outside your living room.

All the other bells and whistles aside, gaming headsets must deliver on spatial awareness, which means they should be able to tell the gamer where the sound is coming from. The Kraken and the G432 both deliver exceptionally well in this area. Logitech, however, goes a little bit ahead of the Razer with a DTS 7.1 as opposed to Razer’s dated THX 7.1 technology. This is not a deal-breaker though because the advantage is just for playing media and not gaming.

Because these headsets are also equipped with 3.5mm stereo jacks, both are guaranteed to work with any device supporting them such as music players, handheld consoles, and mobile devices. However, these are 50mm driver headsets we are talking about, so they would be out of place in a subway. The Kraken and the G432 both include cardioid microphones that are inherently quiet. The G432 flips up and the Kraken retracts into a barely noticeable knob. Razer gains the advantage here with active noise-canceling in their microphone while Logitech did not include this in their mic.

These headsets are built to be worn for hours.

50mm drivers are among the largest drivers installed in headsets, but these headsets still managed to keep them lightweight. Both headsets are under 20 ounces, but the Kraken is ridiculously light at just under 12 ounces. This makes the Razer more gaming-marathon friendly by a little margin. They also include strategically placed headband padding that helps ease fatigue during long gaming sessions.

Razer’s ear cups are PU leather but have a cooling gel-infused memory foam insert and this puts the Kraken slightly ahead of the Logitech’s G432 standard memory foam ear cup inserts. Both headsets are still comfortable even with hours of gaming, it is just that the Kraken is less prone to overheating your ears.

Both headsets produce excellent bass that bassheads will surely appreciate.

As far as high-fidelity audio is concerned, it is a well-known fact that gaming headsets are not yet on par with audiophile-grade gear when it comes to reproducing musical sound. However, gaming headsets have come a long way in terms of audio quality that it can be argued that they are almost audiophile-level in terms of sound reproduction. The same is true with the  Kraken and Logitech offerings as they both deliver excellent audio when listening to media.

The sound signature of both headsets is laden with engineered sound such as bass boosts but the clarity of the mid and highs are both present and not overpowered. This is achieved via their software companions that let you tweak the settings of both headsets on levels that are previously unheard-of. Audio purists will call this cheating, but the beauty of sound is in the ear of the listener, and boy these headsets can pump out loud music!

Picking either one makes you a winner

It is amazing how similar these two headsets are when it comes to doing what they are designed to do. In the world of competitive gaming, especially in FPS e-sports, battlefield awareness is key to winning. The Razer Kraken T.E. and the  Logitech’s G432 delivers the same awareness through sound to gamers via their surround sound processors.

The Kraken is slightly more expensive than its Logitech counterpart, but this is a small price to pay for the noise cancelation feature of its microphones. If you consider the reputation of both companies behind these products, these headsets should be priced higher than they are. The DTS 7.1 for Logitech and the THX 7.1 for Razer alone is well worth the price paid for each of these gaming headsets.

📌 Is the Razer Kraken better for gaming?

The Razer Kraken is several generations old and is still being continuously developed, but the same can be said for the Logitech G432. Both deliver spatial audio awareness in gaming and perform similarly in other areas.

The THX standard for audio quality can work both ways, meaning it is a certification level and not a surround sound format. This indicates that in terms of audio reproduction, Logitech has a small advantage.

📌 Can gaming headsets be used for music?

Definitely yes! The audio quality for gaming headsets today goes beyond telling you where your enemy is, and can deliver great audio playback. If you are a bass-head, then these headsets are for you!

It is rare for a headphone to deliver such a solid performance, and with DTS 7.1 to boot at this price range, so the G432 is worth every penny.