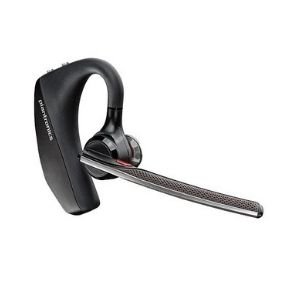 The is equipped with a built-in Alexa, a better Bluetooth version, and has one more microphone than the Voyager Legend

The and the Legend have similar aesthetics, but their button placements are slightly different

While they look similar at first, a closer look at the Voyager 5200 and the Legend will reveal they are made of different materials and their buttons have different placements. The Voyager 5200 is made of better material than the plastic hard shell found in the Legend. 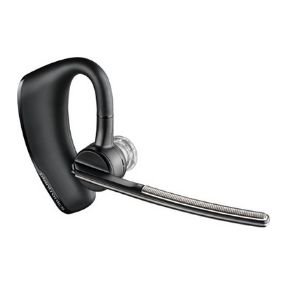 Plantronics further incorporated what its Voyager Legend users suggested when it comes to the headsets’ volume and mute buttons. The volume controls on the 5200 are located at the top, far from the mute button, to avoid confusion or talking after accidentally pressing the mute button. There’s also a red button for activating Amazon Alexa on the 5200 that is missing on the Legend.

Both the Voyager 5200 and the Legend are lightweight and fit comfortably around the ear. Their in-ear tips also fit snugly in most ears and offer great noise isolation.

The delivers better noise-cancellation than the Voyager Legend

When Plantronics first released the Voyager Legend, it was widely praised for its noise-cancellation capabilities. It comes with three microphones and three layers of Plantronics’ WindSmart Technology that work great with blocking out external noise. There’s also no static heard during calls.

The newer Voyager 5200 kicks it up a notch with its four microphones and six layers of WindSmart Technology. They work together to detect wind and noise and actively make the necessary adjustments to your voice. The result? Impressive wind and noise-cancellation and stunning audio clarity. The caller on the other line will still hear you clearly even when you’re in a loud, crowded place or a moving vehicle.

While Bluetooth headsets are not the most ideal audio gear for listening to music or podcasts, both the Voyager 5200 and the Legend can still be used for these purposes. However, since they are only used on one ear, do not expect the same quality you get when listening with headphones.

The and the Legend allow voice prompts and multi-point pairing; the 5200 has a built-in Alexa and better Bluetooth range

Since the Voyager 5200 is equipped with Bluetooth 4.1, it has a better range and more stable connection than the Legend which only uses Bluetooth 3.0. With that said, the Legend still has good connectivity with no drop-offs on connection for most devices.

An extremely useful feature of both the Voyager 5200 and the Legend are their “Answer” and “Ignore” voice prompts. For instance, when you receive a call while driving, the Voyager will tell you who’s calling. If you say “Answer,” it’ll automatically connect the call.

Both the Plantronics headsets also allow you to pair two devices at once. Another crowd-pleaser is their ability to automatically answer the call when they detect that you put the headset on your ear. This is made possible through the motion sensor in the headset.

Both the Voyager 5200 and the Legend are compatible with smart assistants like Siri, Google, Alexa, or Cortana. However, only the 5200 comes with a built-in Alexa so you can activate this voice assistant straight from the dedicated button on the Bluetooth headset.

The and the Legend have the same battery life and water-resistance; the 5200 boasts Tile integration

Plantronics advertise a talk time of up to 7 hours for both the Voyager 5200 and the Legend at full charge. However, some users report they get a little less than that. For around 30 USD more, you can get the portable charging case which can add up to 14 hours of usage. The portable charger also works as a protective case for the Bluetooth headsets, making it a worthwhile purchase.

The Voyager 5200 can be docked on its charging case so you can easily grab the headset when you receive a call. For only an hour and a half of charging, you can get a full charge for both headsets. Another reason to go with the 5200 is it comes with a USB charger, unlike the Legend that uses a Plantronics proprietary charger. This means you won’t have to worry about forgetting the charger at home when traveling or having to bring a different set when your other devices already use a USB charger.

Protected by P2i moisture-repellent nano-coating, both the Voyager 5200 and the Legend can withstand minor spills, splashes, and sweat moisture. However, they are not recommended for submersion, even in freshwater. The Voyager 5200 is integrated with Tile, a feature missing in the Voyager Legend. In cases where you can’t find your headset, you can go to the app and prompt Tile to locate the device.

If you don’t mind the small price difference, go for the

Both the Plantronics Voyager 5200 and the Voyager Legend are reliable Bluetooth headsets that deliver top-notch noise-cancellation for their price. They can effectively block out sounds through Plantronics’ proprietary technology and can be worn comfortably for hours.

If you will only use the headset at your home office, then the Voyager Legend‘s noise-cancellation should be fine. However, if you often talk on the phone while in crowded or loud areas such as cafes or airports, the Voyager 5200 and its superb noise and wind-cancellation will be the better fit for you. The 5200’s better audio quality alone makes the 20 USD price difference almost insignificant. Other smart features like the built-in Tile and Alexa are just an added bonus.

📌 Which is better, the or Legend?

The Plantronics 5200 is overall better than the Voyager Legend headset as the former has more advanced noise-canceling and smart features.

Featuring six levels of WindSmart Technology, the is one of the best noise-canceling headset.

📌 What’s the difference between the and Legend headsets?

The has better noise-canceling than the Voyager Legend. The 5200 is also compatible with Amazon Alexa and Tile, features that the Legend lacks.

📌 How long is the battery life of the and Voyager Legend?

Both noise-canceling headsets boast up to 7 hours of talk time.

RELATED  Plantronics M90 vs M70 (2021): How Do These Headsets Compare and Which One Should You Buy?