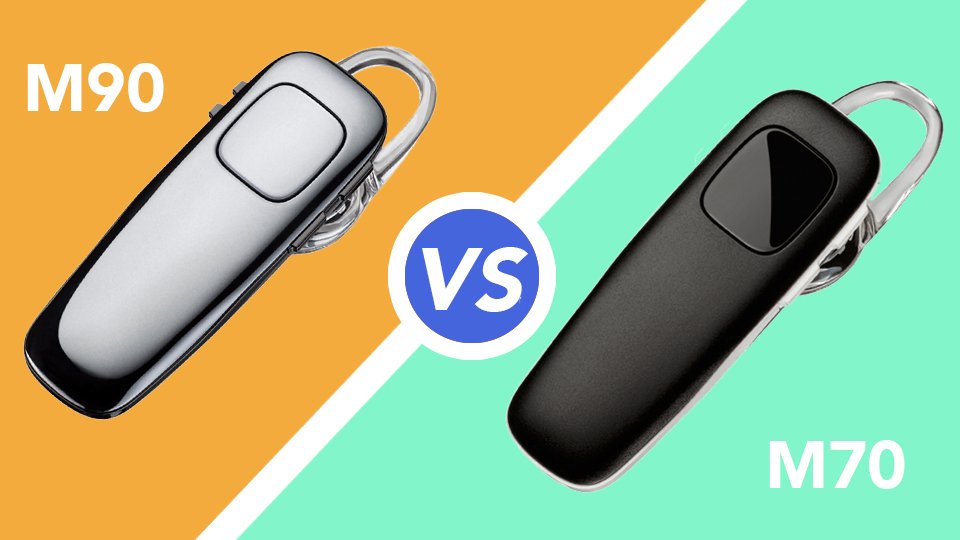 When searching for the perfect Bluetooth headset, you want to find one that is lightweight, has crisp audio output, great noise-canceling capabilities, and has a good battery that won’t die on you in the middle of the day.

The M90 and M70 headsets by Plantronics have everything just mentioned and come at affordable price tags.

You’re probably wondering, however, how these two headsets differ and which one you should get for yourself. Keep reading as we compare these two Bluetooth headsets by Plantronics.

The only difference in design between the Plantronics M90 and M70 is the color that goes around the sides. The M90 is all black while the M70 comes in white, blue, or red.

You may have noticed in our comparison chart above that the Plantronics M90 and M70 have very similar tech specs. In fact, these two headsets would have been identical if not for a couple of things. One of these is that the Plantronics M90 comes in an all-black body while the M70 has a colored line that goes around the sides. You can choose between white, blue, and red with the M70. This is the only difference in design between these two Bluetooth headsets. All the other design aspects of these devices are identical.

The most noticeable design feature on both the M90 and M70 is the flat call button on top of the device. With this button, you can answer calls, reject calls, end calls, activate voice dial, and more. On the sides of both devices is also a power button and (+) and (-) volume buttons that double as track forward/backward buttons when you’re listening to music.

Both headsets are so light and they fit in your ear so well that you will almost forget they’re there. The M90 and M70 use universal-fit eartips that you can adjust to tuck gently into the contours of either of your ears. You can bend and rotate the thin loop on the eartip to get the most comfortable fit. You also have the option of adding a clip-on earloop that comes with the Plantronics M90 and M70.

When it comes to audio, the Plantronics M90 and M70 are exactly the same. They both use wideband technology for HD audio during calls. Wideband transmits calls in an 8 kHz frequency versus a Narrowband’s 4 kHz. This means you get much clearer and more true sound during calls with the Plantronics M90 and M70 than you would with standard Narrowband headsets.

Both headsets can be used to listen to stereo audio such as music, podcasts, and other streaming audio if your phone has the Bluetooth A2DP (Advanced Audio Distribution Profile) feature. The M90 and M70 also do a really good job of reducing noise, wind, and echo when you’re in a call.

The Plantronics M90 and M70 pack the same rechargeable lithium-ion polymer battery that gives you up to 11 hours of talk time and 16 hours of standby time.

One very important thing that separates good Bluetooth headsets from bad ones is battery life. If your Bluetooth headset doesn’t last you an entire day, you might be better off using a wired headset. The battery life of the Plantronics M90 and M70 is surprisingly good despite their high-frequency voice transmission and other advanced audio technology.

The time it takes to charge up the M90 and M70 from empty to 100% is 2 hours. On a full charge, these devices will give you up to 11 hours of talk time and audio streaming and up to 16 days of standby time. A great battery-saving feature the Plantronics M90 and M70 come with is a DeepSleep mode. If your headset remains out of range for more than 90 minutes, it enters into this mode and can keep your battery alive for up to 180 days.

Connecting the Plantronics M90 and M70 is as easy as connecting any other Bluetooth device. These two headsets come with Bluetooth 3.0 which gets its speed from its 802.11 radio protocol. With a 24 Mbps data transfer rate, you’re not going to experience any audio lag from your smartphone to your headset and vice versa.

The M90 and M70 headsets also have the following Bluetooth profiles: Advanced Audio Distribution Profile (A2DP), Audio Video Remote Control Profile (AVRCP), Hands-Free Profile (HFP) 1.6, and Headset Profile (HSP) 1.2. These headsets do not come with the latest Bluetooth version (Bluetooth 5.0), but this shouldn’t make you worry. For a device that will be primarily used for calls, you won’t notice a difference.

Because the Plantronics M90 and M70 have affordable price tags, you can’t expect to get a lot of accessories in the box. In fact, you’re only getting a rubber earloop and a micro-USB charging cable.

The difference between these two is that the M90 comes with a 2-in-1 charging cable. This cable allows you to charge both your smartphone and Bluetooth headset at the same time. It’s a small thing but it may come in very handy at times.

The Plantronics M70 has the edge in design with 3 available colors to choose from while the M90 comes with a 2-in-1 USB charger that is quite handy.

The Plantronics M90 and M70 have everything you need in a Bluetooth headset. They’re both lightweight, comfortable in the ears, have good audio quality, long battery life, and great connectivity. With all these great features and a really affordable price tag, you don’t need to look much further than the Plantronics M90 and M70 when you’re looking for an everyday business headset.

The two headsets are near identical. The only difference is the color trim on the sides of these devices and the charging cables they come with. If you like all-black headsets and you think a 2-in-1 USB charging cable will be useful to you, go with the Plantronics M90. If you’re attracted to the different colors on the M70 and you’re fine with any charging cable that works, getting the M70 will be the better choice.

📌 How are the Plantronics M90 and M70 different?

📌 Is the Plantronics M70 compatible with iPhone?

Yes, both the Plantronics M70 and M90 are compatible with iPhones and most smartphones with Bluetooth capabilities.

📌 Can the Plantronics M70 or M90 take voice commands?

Yes, the Plantronics M70 and M90 can work with either Siri or Google Now to take voice commands.

Press the call button on your Plantronics M70 until you hear “pairing”, then go to your phone’s Bluetooth settings and use the search function. Once your phone finds your headset, follow the pairing instructions on your phone’s screen. You may need to enter ‘0000’ if it asks for a pairing code.