Today, reliable Wi-Fi connectivity is one of the most important comforts you can get for your home. The difficulty is in ensuring that your entire house receives sufficient coverage without losing signal strength or ending up with dead spots. This is where home Wi-Fi mesh systems like Netgear Orbi and Linksys Velop come in. Which of these highly rated mesh routers should you buy? Check out our recommendation for the top two-pack below. 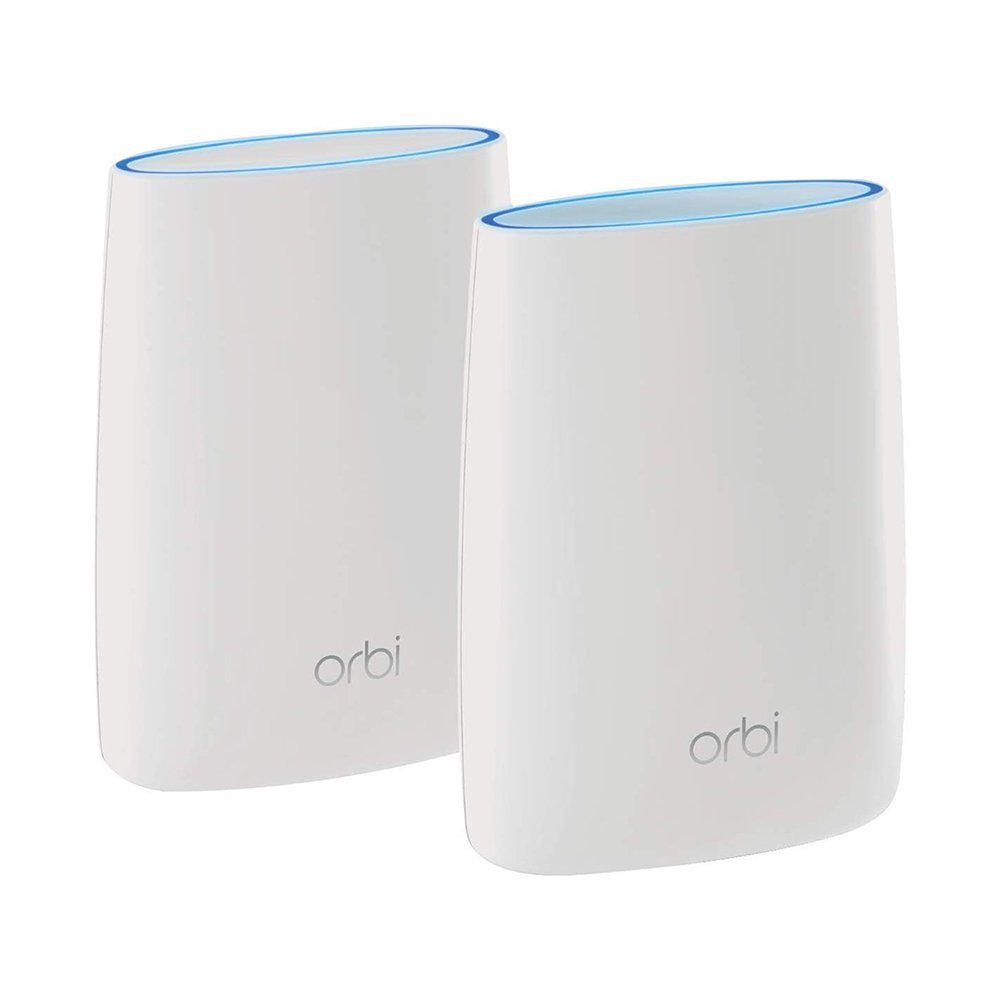 Eliminate dead Wi-Fi zones in your home and enjoy fast and consistent wireless connections for all your devices. The Netgear Orbi keeps your home network secure, too, and works with all Internet providers.

The looks slightly better despite being larger than the .

As you can see, these two mesh routers have differing form factors despite their white color and minimalist approach. The has a wide front side and is taller than the , which is much slimmer in comparison. The former also curves around smoothly so it’s easier on the eyes while the latter has a more traditional rectangular shape.

One questionable design choice on the is the perforated top surface. While it’s added to give some ventilation to the unit, the holes allow dust to filter through inside. Still, the nodes are much lighter and easier to move around than the . You’ll also have an easier time blending it with the rest of your home decor since you’ll want it placed in a central part of the house for max coverage.

Originally, the 2-pack was designed as to perform in a router + satellite configuration, which meant it wasn’t strictly a mesh Wi-Fi system. It’s now been updated to allow satellite nodes to communicate with each other so it can function as a true mesh network.

The has more ports and wider coverage than the .

Both of these home Wi-Fi mesh systems are meant to replace the router plus extender combo that has been popular for most larger homes in recent years. One definite advantage of the is its wider coverage of up to 5,000 sq. ft., making it ideal for homes with multiple floors or extending Wi-Fi to the backyard. In comparison, the only reaches up to 4,000 sq. ft.

In addition, you can find more ports on each node of the than the . On the Orbi’s main router are 1 WAN and 3 LAN Ethernet ports while its satellite has 4 LAN ports, giving you a total of 8. This lets you plug in more devices directly if necessary, so you can give TVs, printers, scanners, etc., a stable and secure connection. Meanwhile, there are only two ports per node on the , for a total of 4.

You also get a USB port on the which can be handy at times. The one edge of the is that you can connect a lot more devices to it, upwards of 40, while the Orbi is optimized for around 25 or so. This might not matter too much since even a big family will likely have no more than 2 or 3 devices that utilize wireless connections. 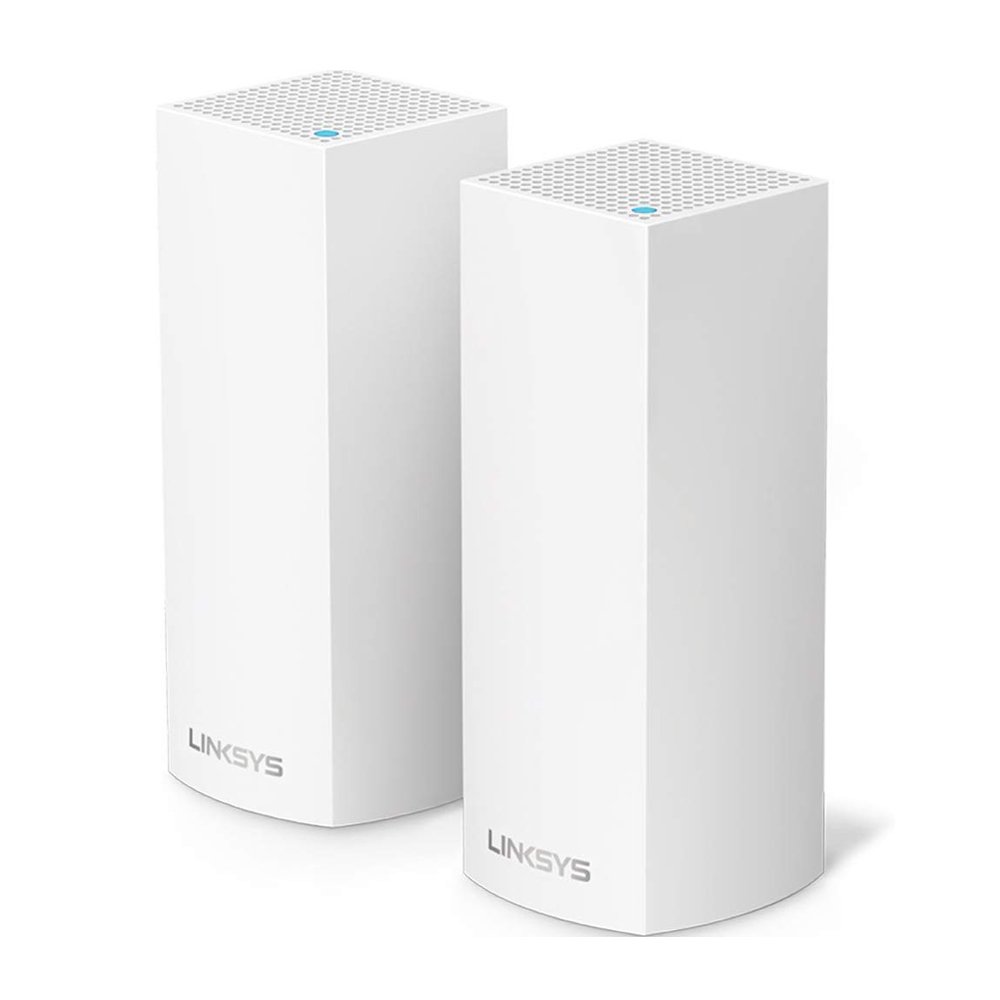 Connect from every corner of your home with the Linksys Velop mesh Wi-Fi system. Each node provides 2,000 sq.ft. of coverage for a modular home Wi-Fi solution delivering ultra-fast speeds with Dynamic Tri-Band technology.

The is faster than the .

The is listed with a top speed of 3 Gbps while the has a 2.2 Gbps limit. Speed performance often varies depending on different conditions at home, but independent testing has confirmed that the Orbi does have the upper hand on the Velop in terms of Wi-Fi speed. Moreover, the isn’t consistent in terms of performance even on the same test.

A big reason for this is due to the having a tri-band backhaul design which sets aside a dedicated channel for each node to communicate each other, freeing the other two bands to maximize connection speeds for your devices. Overall, this greatly enhances the mesh performance of its network. The has a tri-band mesh too, but it only automatically connects you to the most accessible one.

Moving around the house won’t mean having to re-sign in on the or since you can set only one SSID or Wi-Fi name even though you have multiple nodes. That means your device will auto-connect to the nearest node so you get the best speed possible at all times.

The has a more feature-rich mobile app than the .

There’s a notable difference between how you manage either of these Wi-Fi mesh systems, as the can be accessed via mobile app and web browser while the has no web browser interface. Moreover, the Orbi app only offers basic controls, leaving most of the advanced features accessible only through the Netgear admin panel. It’s the traditional method of router management but it goes a bit against the purpose of a mesh network, which is to simplify Wi-Fi at home.

Since the only has mobile app management, its dedicated app is more comprehensive and allows you to access numerous features such as parental controls, device prioritization, guest network access, etc., along with more technical settings such as port forwarding and DNS. Having total control of your Wi-Fi network easily accessible at all times is much better for most homes who just want the Internet at home to work.

The is the clear winner over the .

Eliminate dead Wi-Fi zones in your home and enjoy fast and consistent wireless connections for all your devices. The Netgear Orbi keeps your home network secure, too, and works with all Internet providers.

Check Price at Walmart Check Price at Amazon
We are reader supported. When you buy through our links we may earn an affiliate commission.
Our Pick

Connect from every corner of your home with the Linksys Velop mesh Wi-Fi system. Each node provides 2,000 sq.ft. of coverage for a modular home Wi-Fi solution delivering ultra-fast speeds with Dynamic Tri-Band technology.

Two things make the Netgear Orbi the easy choice in this comparison: speed and reliability. With its dedicated backhaul channel, the Orbi provides consistent performance and fast speeds on any device. Mesh systems are supposed to give you a strong Wi-Fi signal anywhere you go in the house, and the wider coverage of the does that well. Moreover, you get a lot more Ethernet ports for physical connections too.

Perhaps the best reason to opt for the Linksys Velop is its ease of use. Having all of the network management tools available on their mobile app means no fiddling around with traditional interfaces which can be daunting if you don’t have sufficient knowledge about routers. You might also not need such an extensive coverage if your home isn’t too large, which makes the price drops on the Velop more attractive.

📌 Which is better: Velop vs Orbi?

As we’ve reviewed, the is faster and more consistent than the . It provides reliable mesh coverage with a strong Wi-Fi signal, and its top Wi-Fi speeds is higher than the Velop, making it more suitable if you have a high-speed connection.

Yes, if you want a simplified mesh network that does as advertised, the Netgear Orbi is well worth its price. It’s comparably more affordable than other alternatives while ensuring your Wi-Fi speeds remain strong anywhere in the house.

📌 Is a mesh network better than an extender?

Yes, mesh networks are faster, more efficient, and easier to manage than range extenders. Rather than simply repeating a signal like extenders do, mesh systems seamlessly forward traffic across the mesh points as needed. You’ll be able to enjoy the same signal strength from each mesh point rather than getting weaker Wi-Fi the farther you go from the extender’s primary wireless router.

📌 Is a mesh network worth it?

For most medium to large homes that experience weaker Wi-Fi in certain areas, a mesh network system is an excellent solution that’s worth the cost. They enable smoother and stronger wireless coverage in and around your home, while remaining easy to set up and manage.