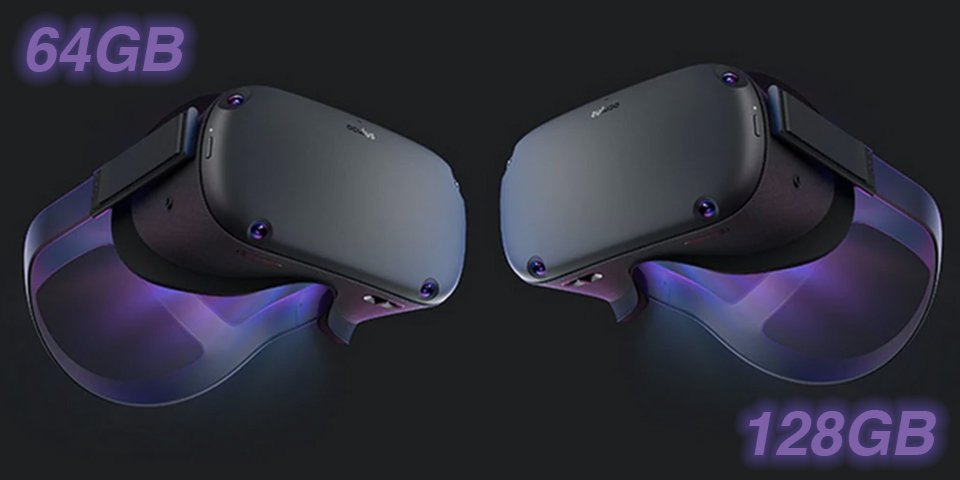 The Oculus Quest is a standalone gaming VR headset. It is set apart from other VR headsets because it doesn’t need to be tethered to a PC or other device via cable, allowing you to spin and move about to your heart’s content.

If you’re in the market for the Oculus Quest, you’ll notice that they come in two versions: the 64GB version and the 128GB version. If you’re wondering how these two differ and which one will be best for you, keep reading as we go through the details to help you make a better purchase decision.

The Oculus Quest has a premium design and robust build that can withstand heavy usage.

The Oculus Quest comes in a sleek and simplistic design. Its matte black exterior paired with a fabric-like texture around the sides and thick rubber straps with velcro adjusters give it a very premium feel. The Quest weighs only 1.25 pounds and feels comfortable on your head. After getting used to its front-heavy design, the Oculus Quest can be worn for hours without experiencing fatigue or overheating.

The Oculus logo sits top center on the smooth matte front panel of the device, right below the microphone. This VR headset has a total of four cameras to help track its controllers and keep you within your safe zone. To the left of the device is your charging port. The Oculus Quest has a USB-C charging port and can be plugged in while you’re using it. On the right side of the device is your on/off power button. And finally, at the bottom, you’ll find a slider for adjusting your headset and a volume rocker.

The overall build is quite robust and should be able to withstand heavy usage. The paddings on the inside of the headset are also soft and comfortable enough to be worn for hours with low fatigue.

The Oculus Quest has excellent video, audio, and battery performance – it is an excellent VR headset all around.

The Oculus Quest comes with an Android 7.1.1 based device with a Qualcomm Snapdragon 835 processor, 4GB of RAM, and an Adreno 540 GPU. It has a screen resolution of 1440×1600 on each eye and a 72Hz screen refresh rate. The Quest has a 95-degree field of view for a more immersive experience. With all these under the hood, games run smoothly and visuals are crystal clear. However, its 72Hz refresh rate will leave you wanting more screen fluidity.

When it comes to audio, the Oculus Quest has built-in speakers that feature positional audio, allowing the user to really immerse in the game they’re playing or the movie they’re watching. The speakers sound great and positional audio works excellently. You do not need to plug in a pair of headphones to get the full immersive experience. But if you choose to, Oculus sells in-ear earphones that work seamlessly with the design of the Quest. Third-party headphones and earphones will also work well.

Battery life on the Oculus Quest runs for about 2.5 hours of continuous use. If you want to play longer, you can keep the headset plugged in so you can use it while it’s charging.

The Oculus Quest controllers are comfortable to hold and have intuitive button controls.

The Oculus Quest comes with two handheld controllers similar to that of the Oculus Rift. They have easy-grip handles with textured rubber for extra comfort and better grip. They fit well in your hands and can be used for long periods of time comfortably. You’ll also find a wrist strap attached to each controller to secure them while in use.

Each controller has a total of six controls. Your thumbs access the home/menu buttons, A/B and X/Y buttons, and joysticks. You also have your trigger buttons in front and grip buttons on the controller handles. The button layout is intuitive and feels realistic when interacting with different objects in a game. The controllers incorporate infrared and visual technology for tracking, making them perform smoothly and almost latency-free. They also have vibration effects that add immersion.

If you do not want to use controllers, the Oculus Quest also has beta hand tracking. Although it is still in beta mode and doesn’t perform perfectly, it does a pretty good job and can be used seamlessly in quite a number of games.

Deciding between the 64GB version and the 128GB version will depend on the type of user you are.

The only difference between the Oculus Quest 64GB and 128GB is storage capacity. You’re not going to find any difference in performance or features. That being said, there are a couple of reasons why you would want the 64GB version over the 128GB version and vice versa. One reason to get the 64GB version of the Oculus Quest is that it is cheaper. As of writing, the 64GB version retails for roughly $60 less than the 128GB version. Also, with 64GB of storage, you can install over 50 games at a time and still have storage space left. This is more than enough games that the average user will need to be stored in their device. As for movies and videos, streaming is now more popular than downloading and storing on your device so you will likely not use up all 64GB of storage.

On the other hand, 128GB of storage is the more future-proof option. There are now over 200 games compatible with the Oculus Quest and there is no way of knowing how many more will be developed over the next several months. You will need lots of storage if you want a big library of games at your fingertips. The 128GB is also the better option for content creators. The Oculus Quest has a built-in game recorder that gamers can use to record their gameplay. These gamers will need extra storage space to store all their gaming content.

The 64GB Oculus Quest will suffice for most users while the 128GB version will be the better option for advanced gamers and content creators who record gameplay.

The Oculus Quest is an excellent gaming VR headset that gives you a fully standalone experience with no wires to worry about. Choosing between the 64GB version and the 128GB version will depend on the type of user you are.

For most people, having 64GB of storage on a VR headset will be more than enough. However, for those who like to keep a huge library of games at their fingertips, or content creators who will be recording their gameplay on the VR headset, getting the 128GB version will be the better option.

📌 Are the Oculus Quest controllers rechargeable?

The Oculus Quest controllers are powered by AA batteries. Each controller uses 1 battery.

📌 How many games can fit in the 64GB Oculus Quest?

You can install around 40-50 games/apps at a time on your 64GB Oculus Quest.

📌 Can I use my Oculus Quest to play PC VR games?

Yes, Oculus Link allows you to turn your Quest into a PC VR headset giving you access to any PC VR game.

📌 Can I use the Oculus Quest with over-ear headphones?

Yes, the Oculus Quest is designed to work with many different headphones and earphones.