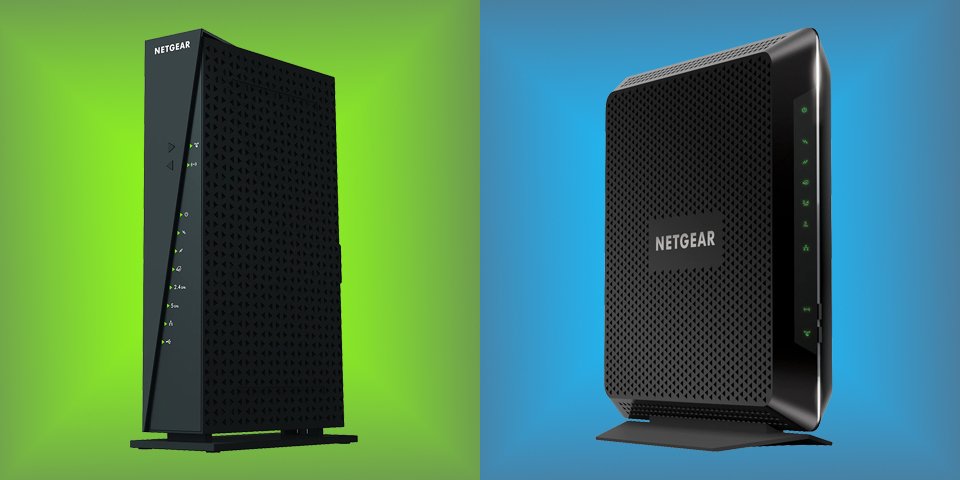 NETGEAR is known for producing some of the best networking equipment. If you are looking to replace your router or modem/router hardware at home, NETGEAR provides some very competitive options. The NETGEAR C6300 and NETGEAR C7000 are highly recommended modem/router combos for their impressive speeds, coverage area, and ability to support multiple Wi-Fi connections. In this article, we are pitting these modem/router systems to see which system is the best.

Both the NETGEAR C6300 and the C7000 benefit from faster and more consistent internet connections using 802.11ac wireless technology. This wireless standard is an improvement over the older wireless N technology in older routers. This standard also includes dual-band technology which enables faster speed and flexibility for the wireless network.

The C7000 utilizes AC1900 while the C6300 uses AC1750. This tells us that the C7000 can provide bandwidths that can reach 1900 Mpbs combined while the C6300 can only deliver up to 1300Mbps in the 5GHz band and up to 450 Mbps in 2.4GHz. Having a bigger bandwidth means it can connect more devices while avoiding connection issues, interferences, and lags. It should be noted that your internet speed is dependent on the limitations set by your Internet service provider.

The NETGEAR C7000 is capable of handling more concurrent users through its higher channel bonding capacity.

Channel Bonding is another technology integrated into both the C6300 and the C7000. This technology allows modems to take advantage of multiple channels at the same time which translates to better network stability and performance. Having more channels also helps keep internet speeds among multiple network users consistent and reduces congestion over the network.

The NETGEAR C6300 and C7000 can be controlled remotely using the NightHawk app.

The C6300 and the C7000 enable you to monitor network conditions, manage subscriptions, and adjust multiple settings remotely through the NightHawk app. This app can be downloaded on your smartphone from the Google Play Store and AppStore. The NightHawk app is an upgrade to the older NETGEAR Genie App.

The NightHawk app gives you the benefit of remotely accessing your home Wi-Fi from anywhere, as long as you have an internet connection. Through it, you will be able to set smart parental controls that can both filter internet content and limit the time spent online for specific devices. This app also allows you to enable and adjust NETGEAR Armor security settings to protect your network and devices from unauthorized access. With the app, you can also set-up a separate network for guests.

NETGEAR provides essential security features with its products and both the C6300 and the C7000 are no exception.

The NETGEAR C6300 and the C7000 are both equipped with WPA/WPA2-PSK security standard protocols. These are important security features intended to protect users from common security threats and significantly reduce the risk of snooping or other unauthorized access on your network.

With high-powered signal amplifiers and three dual-band internal antennas, the NETGEAR C7000 has the edge in efficiency and effective range.

One notable feature shared between the C6300 and the C7000 is the inclusion of Beamforming technology. Unlike older routers that broadcast their signal in all directions, Beamforming allows a wireless signal to be emitted directly towards a receiving device. This results in signals that have better range, better consistency, faster connections, and can also reduce signal dead areas in its area of coverage.

Another notable and significant feature both modem/router systems have is IPv6. IPv6 (Internet Protocol version 6) is an upgrade to IPv4. To put it concisely, IPv6 is more efficient when it comes to handling multiple simultaneous users without losing data. IPv6 is a long-term solution to problems and apparent limitations that emerged with the previous IPv4 standard. This feature ensures that both the C6300 and the C7000 are capable of delivering efficient, consistent, signals for multiple users over wired and wireless networks.

A significant advantage the C7000 has over the C6300 is that it has high-powered signal amplifiers and three dual-band internal antennas. This means that you can make the most out of its beamforming technology due to having more antennas to emit signals from, and it has sufficient hardware to utilize its 24 x 8 channel bonding. All this gives the C7000 a larger effective range and better efficiency in handling multiple users simultaneously.

The NETGEAR C7000 is significantly more powerful than the C6300, but the C6300 is more affordable.

While both the NETGEAR C6300 and the NETGEAR C7000 are capable modem/router systems, the C7000 is the superior system between the two. The NETGEAR C7000 is capable of delivering higher bandwidths, wider effective coverage areas, and accommodating a maximum of 30 devices over its wireless network. Its system is more efficient in handling network congestions and traffic.

However, if you want to save some money and get a system that just does what it’s supposed to do, the C6300 will more than suffice.

Using the right modem/router combo device will certainly improve your internet experience. However, you will never get speeds that are beyond the limits which are determined and set by your Internet service provider.

Besides the aesthetics, the NETGEAR C7000 has a higher capacity channel bonding of 24 x 8 as opposed to the C6300 capacity of 16 x 4. The NETGEAR also has a wider effective range and better utilization of beamforming because of 3 internal antennas.

📌 What are the benefits of using a modem/router combo system?

If you are a basic home user, there are great benefits to using a modem/router combo system. It is cheaper than keeping a separate modem and router, having a single unit that does the job of both modem and router is easier to set-up, and more often than not, it will be a better unit than the one your ISP provides or lets you rent.

📌 How do you secure your home internet network?

Securing your home network takes some effort and requires rather basic steps. Among those are keeping your network security software up to date, renaming routers from time to time, using strong passwords and changing them periodically, and also monitoring which devices are connected and registered to your network.

RELATED  NETGEAR Nighthawk X6 vs X8 (2021): Which Smart WiFi Router Should You Get?