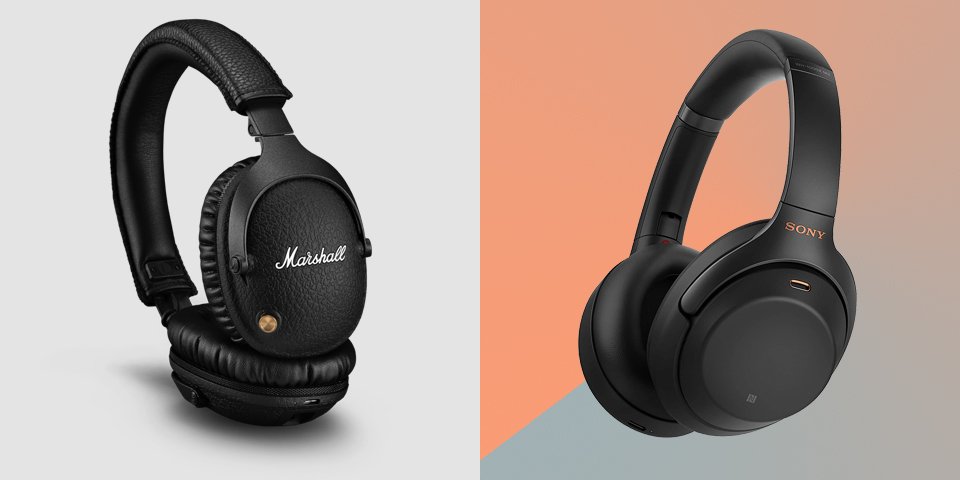 Today we’re bringing you two of the hottest ANC headphones on the market. On the one hand, we have the upstart but confident challenger, the Marshal Monitor II ANC and on the other, the current king-of-the-hill ANC headphones, the Sony WH-1000XM3. How close does Marshall’s expertise in speakers bring them to Sony’s decades-old experience in headphone manufacturing? The comparison below revolves around how these two built their headphones around ANC technology.

At this price point, build quality is expected to be perfect, and both of these headphones deliver. At first touch, the Marshall Monitors communicate its robust and rugged build with the company’s signature mottled black plastic. This material practically encases every Marshall product, from their earphones to speakers, and they can take a beating. The headphone fits snugly and conforms to any head size comfortably. The clamping force may be increased for those with bigger noggins, but still just so.

For Marshall, this is their first ANC headphones, but this is not the first Marshall Monitor. The first iteration looks almost the same, with the distinctive golden button for pairing. The ear cups are oval-shaped and fit just about any ear size comfortably. The Monitor II is all black and matted with just the Marshall logo emblazoned on each cup. These headphones are a tasteful combination of metal, plastic, and leather, which is a welcome change from the mostly plastic builds of modern headphones.

Sony on the other hand, already have multiple iterations of the Sony and even has a successor for the . Besides that, they were a major player in the headphone industry decades ago. This pedigree and experience translate well into the engineering that went inside the Sony , from its intuitive touch controls, its perfectly tuned clamping force, and the shape of its ear cups. Just the simple Sony logo at the base of the clamps and a tiny NFC logo on the cups complete its clean aesthetic.

While the Sony is lighter, it holds up quite well to abuse. People have taken it to planes, buses, trains, you name it, the Sony survived it and more. While almost entirely made of plastic with a metal headband, these headphones are extremely durable and the absence of wires perhaps makes it even more so.

Active noise cancelation is awesome but it does take a bit of getting used to. When using ANC, there is what you call cabin pressure, or the feeling of pressure on your ears like you are underwater. This is an unfortunate byproduct of ANC technology and the Marshall Monitor II’s have a lot of cabin pressure while it blocks out noise.

Marshall’s ANC blocks out almost the same level of noise as Sony’s, but the does not have the uncomfortable cabin pressure that the Monitor II’s have. Sony is way ahead when it comes to eliminating cabin pressure and is more comfortable to use than the Monitor II’s when ANC is turned on. Marshall did a fantastic job on its ANC though, because Sony’s ANC is a tough nut to crack, and coming close to it is an achievement all by itself.

Sound quality is something that always degrades over wireless connections, especially over Bluetooth. Enhanced audio codecs changed that and it is unfortunate that the Marshall Monitors only have the standard SBC for its Bluetooth and nothing else. What this means is that it is limited to about 320kbps, which is the Bluetooth codec with a relatively low quality. This means you can only listen to standard quality audio on the Marshall. Sony, by comparison, can play a variety of higher quality codecs, such as SBC, AAC, aptX, aptX HD, LDAC.  LDAC, which is Sony’s proprietary codec, can transfer data 3x faster than SBC.

In terms of ANC and sound quality, the Sony leads by a considerable margin, which is just amplified by its ability to use multiple codec formats. There is one thing that Marshall has going for itself in the wireless category in that it can connect to two devices at the same time. The Sony can only connect to one device, so there is that.

A transcontinental flight on one charge? No problem!

Both these two headphones can be charged via a USB-C cable, thus eliminating the need for additional cables. Marshall is the clear winner when it comes to battery endurance, as it can last for 45 hours with ANC off and 30 hours when turned on. If you are a fan of tactile controls, the Monitor II has you covered with a joystick and buttons. This is a welcome addition to the ANC Headphones, which are dominated by touch controls.

Speaking of controls, both headphones are supported by a companion app, where you can tweak settings. The Marshall is simple and, compared to the Sony that features a fully customizable EQ, feels a bit limited.

The Marshall Monitor II ANC gives a different take from the standard set by the Sony .

While the Marshal Monitor II ANC lacks some essential features to dethrone the Sony WH-1000XM3, it is a strong contender and quite a desirable pair of cans. Part of its appeal is its use of tactile controls as opposed to touch, its use of metal, plastic, and genuine leather. The coiled wires that are also visible on the Monitor II’s lend it a very distinctive and almost steampunk-like character.

Marshall has outdone themselves by going out of the norm in ANC headphones and it could only get better on their next iterations. With Sony, the sleek and minimalist design, a host of features, excellent and comfortable ANC performance retains its king-of-hill reputation when it comes to wireless ANC headphones. The only winners we can really declare here are the buyers because they win whichever one they pick.

📌 Which one has better ANC, Sony or Marshall?

Marshall’s ANC comes really close to Sony in terms of noise reduction, but can be improved especially in terms of cabin pressure, which can cause discomfort for some people.

📌 Is the Marshall Monitor II worth its price tag?

It is, in our humble opinion, well worth it. The rugged, handsome construction and durability alone are enough for the price. Throw in its unique controls and Marshall’s pedigree behind it and it’s a great value for what you are getting.

📌Are wireless headphones good for music?

Advances in Bluetooth audio codecs have vastly improved the wireless data transfer rates between devices. The faster and more bandwidth the wireless connection can achieve, the higher the quality of the audio it can support. Wireless audio is now at par with its wired counterpart in terms of quality.

📌 Can the Marshall Monitor and Sony be used wired?

Yes, these headphones can be used with 3.5mm connectors. This is a good option in the unlikely event you run out of battery power in an unexpected place.