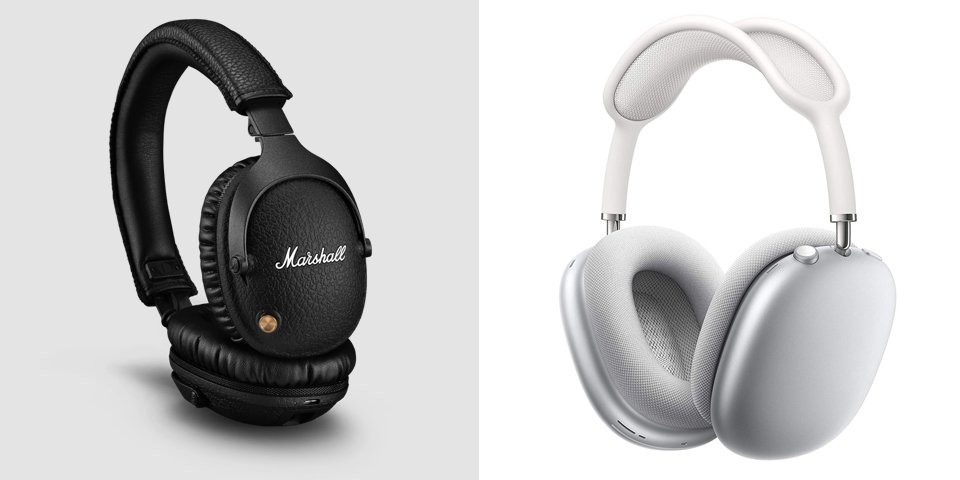 The ANC headphones market is saturated with products that may or may not be just a bag of gimmicks, but the two headphones we will be taking a closer look at are anything but that. The Marshall Monitor II ANC and the AirPods Max are both relative newcomers to this segment. In terms of styling, these two could not have been more different and both are marketed to have outstanding Active Noise Cancellation features.

We never take anyone’s word for it, so naturally, a head-to-head comparison is in order. Belonging in the higher-end portion of this headphone segment, this should be an interesting ride. There has never been any Apple over-ear headphone before, and for Marshall, this would be their first foray into ANC. Let us dive in, shall we?

These two brands, aside from anything else, have gotten brand identity perfect. This is because when you look at the Monitor II’s, you immediately know that Marshall made it. In much the same way, the AirPods Max has the Apple branding stamped all over its clean aluminum housing without even a single mark. The similarities also extend to their build quality as the workmanship on both headphones is on the high end of the spectrum. Aside from the build quality and craftsmanship, they are contrasts.

The Marshalls headphone is a tasteful mix of ABS Plastic, steel, and genuine leather. The Monitor II’s have the same colors that you will find on a Marshall speaker. The same leathery and mottled textured plastic are on the cups, with a leather headband as well as genuine leather earcups. One more thing to note is that the earcups themselves are magnetically attached and shockingly easy to remove, either for replacement or cleaning. The black steel, gold button/joystick, black cups with the Marshall logo, the coiled wires connecting the two, leather headband, and earcups give the Monitor II’s that distinct steampunk look favored by the company.

Apples’ first headphones are quite distinctively an Apple product just by looking at it, so much so that the actual device does not even have any markings on it. True to Apples’ notoriety in making all their parts themselves, the 40mm dynamic driver is Apple-designed (it is the only thing written on their website). The headband is made up of high-quality plastic with a soft and stretchy mesh fabric to cushion it on your head. The earcups are a comfortable and extremely breathable mesh fabric that is also removable. The headband adjustment is via two stainless steel rods that slide up and down into the headband. The housing is an all-aluminum affair and is available in all Apple colors.

The first Marshall Monitors boasted one of the most compact forms of an over-the-ear headphone with a 40mm driver, which is among the largest. The same is true for their second ANC-enabled iteration. The Monitor II has the lowest profile that has been seen in an over-ear headphone, sitting snugly and hugging the head contours closely that it does not stick out.

While the earcups on the Apple AirPods Max are larger by a considerable margin, it is still very close to the Marshall in terms of being low profile. The Apple is available in a variety of colors, but the Marshall’s are only available in their black colorway. Apple is all steel and aluminum with fabrics, and the Monitor II’s are leather, steel, and plastic.

ANC is not new to Apple, but an over-ear form factor is a first for the tech giant. Their performance is fascinating in this area to say the least, where the Marshall performed really well on higher frequencies and struggles just a bit on low rumbles. Unfortunately, the low rumbles are the sounds that you would want to keep out while listening to music, for these are the train and airplane cabin sounds. When it comes to ANC, the Apple product is a clear winner, blocking out noise at almost every frequency range.

Both are consumer-centric headphones and they are meant to be with you while traveling and the Marshall wins with the form factor. The Monitor II’s come with a small cloth bag and the headphones fold up into themselves in an unbelievably small package that can fit in your hand almost. The Apple, on the other hand, comes with a controversial case design that if anything, makes the headphone’s cross-section even larger, making it difficult to stow in your carry-on luggage.

However, both headphones feel like they do not even need cases, as they are so solidly built that even if you toss them in your backpack as they are, they won’t suffer any damage at all.

The Marshall Monitor II ANC and Apple AirPods Max are both reassuringly heavy.

These two headphones are by far relative heavyweights, and we mean that quite literally. At 320 grams, Marshall’s Monitor II is already heavier than most headphones, and the Apple weighed in at 386 grams. The headphones do carry their weight really well though and they are both comfortable on long listening sessions. However, Apple’s deeper earcups, as well as its mesh fabric construction make it the more comfortable choice. The Monitors’ leather earcups can heat up your ears after about a couple of hours of listening.

It all boils down to personal preference.

While the Marshall Monitor II ANC has a distinctly retro vibe, the Apple AirPods Max flaunts the very future in their design. They both have exclusive features not available in the other that they simply cannot be interchanged. This is why your preference comes into play. Both headphones are among the most durable devices in this class. While Apple’s ANC is better in terms of canceling out noise while traveling, ANC is no longer for use mostly in travel. Now that most of us are working from home, blocking out noise even for as little as an hour is already a blessing.

The one thing to note though is that Apple products work at their best in the Apple ecosystem, and the Marshall wins points for compatibility, especially with the 3.5mm port. If you like the old-school vibe, go for the Marshall Monitor II ANC, and for the futuristic almost surgically clean lines, grab the Apple AirPods Max.

📌 Is the AirPods Max the better choice?

The AirPods Max has better ANC but is priced almost twice the Marshall. It is quite a fine balance between the features you need and the features you want, as well as the money in your pocket.

📌 Can the Marshall Monitor II and AirPods Max be used for gaming?

For mobile devices, definitely yes for both headphones. The Marshall also has a 3.5mm stereo port, which makes it compatible with anything that supports that. However, Apple devices can be a bit tricky to set up with other devices, especially so that the Air Pod Max has no ports except USB-C.

📌 Can the ANC in headphones affect audio quality?

Yes, if anything it enhances the clarity by blocking out unwanted noise. With ANC, you can hear the peak performance of the drivers in your headphones.

📌 Do ANC headphones have wired connectivity?

Most wireless headphones, ANC or not have wired support. The Monitor II has a 3.5mm stereo jack while the AirPods can be used with lightning to stereo adapter.