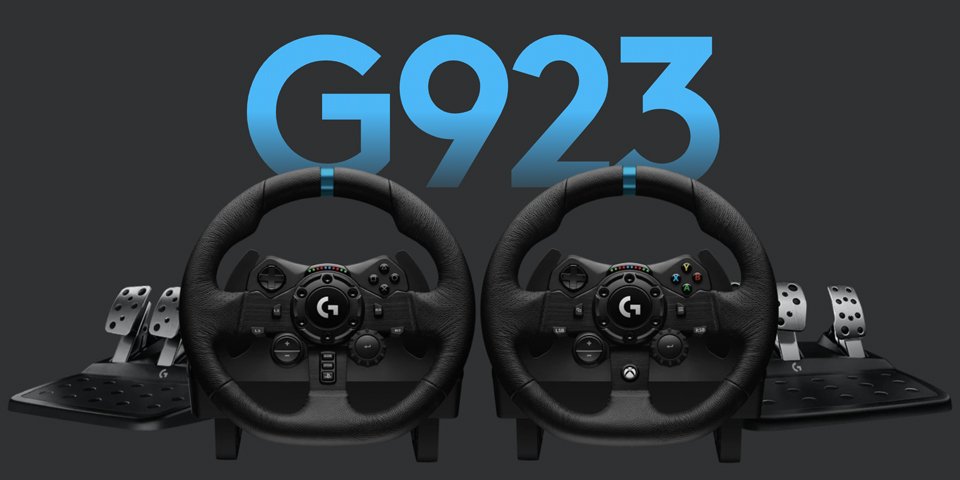 The Logitech G923 is the newest racing wheel from Logitech. With TrueForce, Closed-Loop Motor controls, and a new and improved brake system, the G923 not only brings the best from its predecessors but also distinguishes itself as the next generation of racing wheels. We’re here to take a closer look at this gear to determine if the G923 is the right wheel for you.

The G923 wheel spokes are built with anodized aluminum which makes for a decorative, durable, and corrosion-resistant finish on the surface. This is then covered with hand-stitched leather. Just like the previous models, this wheel also comes with a blue aluminum strip that indicates its top center. This combination of materials feels amazing to grip while driving.

Built into the wheel is a 24-point selection dial that allows you to adjust multiple settings among which are brake force, traction, and torque. The button placements are also comfortable. There are two versions of the G923. One with PlayStation controls and another for Xbox controls, both of which are compatible with PC. Sitting on the wheel is a colored LED rev indicator that shows your RPM range (in supported games).

The wheel is also home to the programmable dual clutch launch controls. This control enables you to start from the line cleaner and faster by giving you more control over your traction and reducing smoke. Bear in mind that this feature requires you to manually set up key-bindings before starting.

With a new progressive spring, the pedals provide more realism and control.

Another area that has received some improvement is the pedals. Moving away from the old rubber stopper in older models, the G923 comes with a progressive spring. This makes the pedals feel more responsive and accurate making them more akin to a pressure-sensitive brake system. The pedal frames and arms are built with cold-rolled steel and brushed stainless steel for the pedal face.

Logitech’s new force feedback technology, TrueForce, sets the bar high when it comes to having an immersive experience when sim racing.

Tapping directly into in-game sound and physics engines, TrueForce processes these data to produce realistic details in supported games. With TrueForce enabled, you can feel every bump on the road, every change in driving terrain, and the buzz and vibration of acceleration. TrueForce enables you to feel the same details as driving or racing in an actual car at any given moment. It provides you with a whole new level of immersion and brings you an elevated experience.

The TrueForce feedback system makes the G923 an absolute blast when playing a game that supports it. It is a unique experience of realism to sim racing. While this feature is only available for select titles at the time of writing, more game developers are working on integrating this feature into their titles.

When playing games that don’t support this feature, you still get the benefit of force feedback from the G923’s closed-loop motor controls just like the Logitech G29/G920. Since this is a gear-driven wheel, you get decent force feedback but you also might feel some rattling during bumps and other extreme situations.

The Logitech G923 is built with the same materials as its predecessors from its leather stitching down to its weighted brushed stainless steel pedals. Based on the design and quality of the materials used, we can say that the G923 is built to last. If you have used previous wheels from Logitech, you should have no trouble adjusting to the G923. It is easy to set-up and highly customizable.

The TrueForce technology adds a whole new layer of immersion to your driving experience with the G923. This innovation in force feedback technology provides you with a greater sense of control. By engaging more of your senses as you play, it provides a new level of realism. Although there are only a few titles that support this feature, more game developers are working to add this feature to their games.

If you are into sim racing and looking for a wheel with an amazing build quality that is easy to set-up and customize, we recommend the Logitech G923 for its premium and sturdy build and its innovative TrueForce feature. As this steering wheel is forward compatible with next-gen consoles such as the Xbox Series X and the PS5, this product will continue to be supported in future titles.

📌 Where can I find the list of supported games for the Logitech G923?

You can find the complete list of titles that support the features of the G923 on their official product page here.

📌 Does the Logitech G923 come with a shifter?

The product does not come with a shifter. However, Logitech’s Driving Force Shifter, which is sold separately, can be used with the G923.

📌 How do I adjust and customize settings on my Logitech G923?

You can adjust device settings such as wheel sensitivity, force feedback levels, and customize buttons through the G Hub Gaming Software for PC.