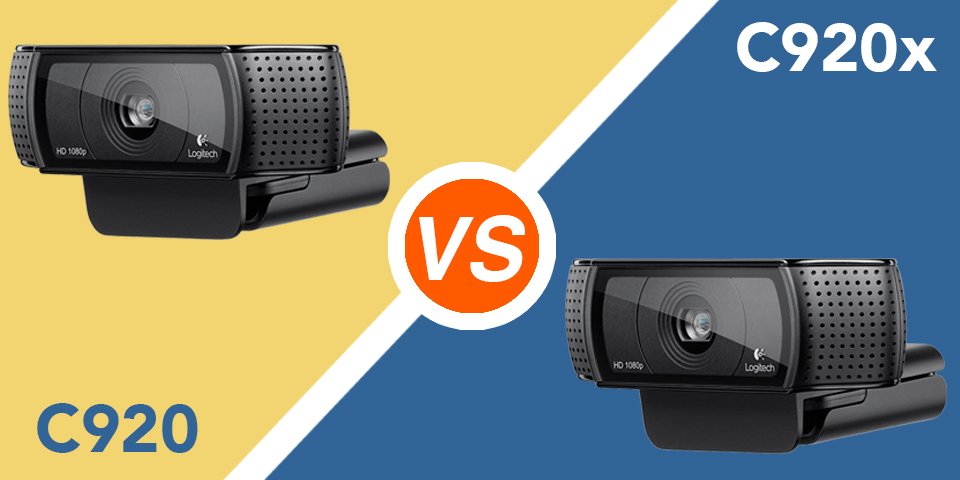 Logitech leads the charge in webcam production with its long and diverse lineup of webcams targeting corporations, prosumers, and consumers. With so many webcam variants being put out there by Logitech, like the C920’s C920c, C920s, and C920x, it can be confusing when you have to choose one for yourself.

In this article, we’re going to compare the Logitech C920 and its C920x variant. We’ll take a look at their specs and how these two webcams compare as we try to help you make a better buying decision.

Design-wise, the Logitech C920 and C920x are identical.

The Logitech C920 and C920x share the same layout and design with a few other webcams in Logitech’s lineup like the C920s, C922, and C930e. They measure 1.14-inches high, 3.7-inches wide, and 0.94-inch deep. Most of the front is covered with glass that protects the lens from getting scratched. On each side of the webcam are a blue indicator light and a plastic microphone grille.

The C920 and C920x also come with a universal clip/stand attached to the bottom. The universal clip allows you to attach the webcam to most laptops and flat-screen monitors. You can also make the webcam stand on its own on your desk or attach it to a camera tripod with the 1/4-20 mount at the bottom. This is the same clip/stand that is found on most of Logitech’s C9XX webcams.

These webcams also have a built-in light correction processor that does a very good job of balancing video brightness according to your lighting condition. So whether you’re video calling from a dark corner in your room or you’re outdoors under the blazing sun, the Logitech C920 and C920x will produce well-balanced lighting every time. And to top it all off, the Logitech C920 and C920x also come with fast and accurate autofocus.

Both the Logitech C920 and C920x come with a stereo microphone setup.

Logitech did a pretty good job with these webcams’ microphones. They both have two omnidirectional microphones that capture clear and natural stereo sound. The microphones are located on either side of the webcam’s lens and are protected by plastic microphone grilles. You won’t be getting studio-quality sound with these microphones, but they perform quite well for everyday video calls. If you’re planning to use either the Logitech C920 or C920x for live streaming and podcasts, however, you will want to invest in a better external microphone.

The only difference between the C920 and C920x is that the C920x comes with a three-month XSplit license.

The Logitech C920 and C920x don’t come with a bunch of certifications like the business webcam models do. However, they still work very well with apps such as Skype, Microsoft Teams, FaceTime, Lync, Cisco, and more. Both webcams are plug and play devices that are quickly recognized by these popular apps. For a little extra cash, you can get these webcams with an optional desk tripod. Adding a tripod will allow you to get more creative with your camera angles, but most of the time, the clip/stand these webcams come with will work just fine.

The only difference between the C920 and the C920x is that the C920x comes with a three-month XSplit license. This is why there’s that little “x” at the end of the name. XSplit is a powerful app for video editing, broadcasting, recording, and game-casting. With the C920x, you get to enjoy everything XSplit has to offer plus 24/7 technical support for three-months.

The Logitech C920x is great for those who want to give XSplit a try while the C920 is for those who just want the webcam without any extras.

The Logitech C920 and C920x are great webcams that meet today’s standards for high-definition video calling, live streaming, and more. With full HD capabilities and 720p at 60fps, crisp and bright video, fast autofocus, and natural stereo sound input, these webcams will be a huge step up from your old built-in webcam.

Comparing design, video quality, and audio quality between the C920 and C920x isn’t possible because they are the same exact webcam. The only difference between the two is that the C920x comes with a three-month XSplit license. This is at no additional charge. So if we had to pick a winner between the C920 and C920x, we’d go with the C920x. An extra freebie is always nice to have. You will get to try for yourself the many features XSplit has to offer and decide whether or not you’ll renew your license after three months.

The SRP for both the C920 and C920x are the same. You might find one or the other a bit cheaper or more expensive depending on where you’re buying from.

📌 Does the Logitech C920 have speakers?

No, the C920 does not have speakers. The microphone grilles on the webcam are often confused to be speakers.

📌 Is the Logitech C920x compatible with Mac?

No, the Logitech C920x is simply the original C920 bundled with a three-month XSplit license.

RELATED  Logitech MX Keys vs Mechanical Keyboard (2022): Which Keyboard Is Right For You?