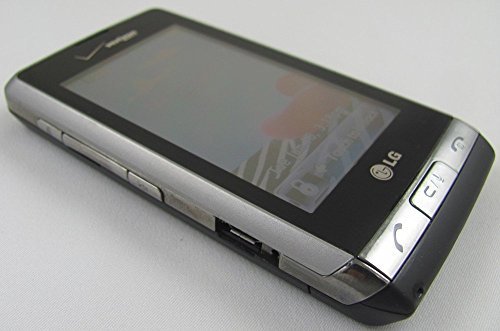 LG Dare is a low-end cellphone released in June 2008, counting with a 3-inches screen and a 3.2 MP back camera. We will get a better idea about this cellphone’s characteristics when we get into more details.

Although this cellphone is as big as 4.1 inches long, it only comes with a much smaller 3″ display. LG didn’t seem to put much effort to reduce weight in this 3.76 oz cellphone.

The LG Dare is equipped with only a 3.2 megapixels back facing camera. It is also able to film 640×480 VGA videos. Additionally, the camera has flash.

LG packed this phone with a good level 3″ screen, and a 400 x 240 resolution, giving this phone a decent image quality. This screen uses TFT resistive technology, but it can’t detect multi touch gestures.

This phone comes with a low capacity 1100 mAh Li-Ion battery that provides the LG Dare a poor battery duration comparing with other similar cellphones. According to LG, this device has an estimated talk time of 4.7 hs and a stand by time of 360 hours.

This cellphone doesn’t have a SIM card, because it isn’t a GSM cellphone and it works in CDMA networks.

This phone also features some interesting features like Bluetooth (2.1), GPS Localization and NFC (Near Field Communication), and some sensors likeLight Sensor, Proximity Sensor and Accelerometer.