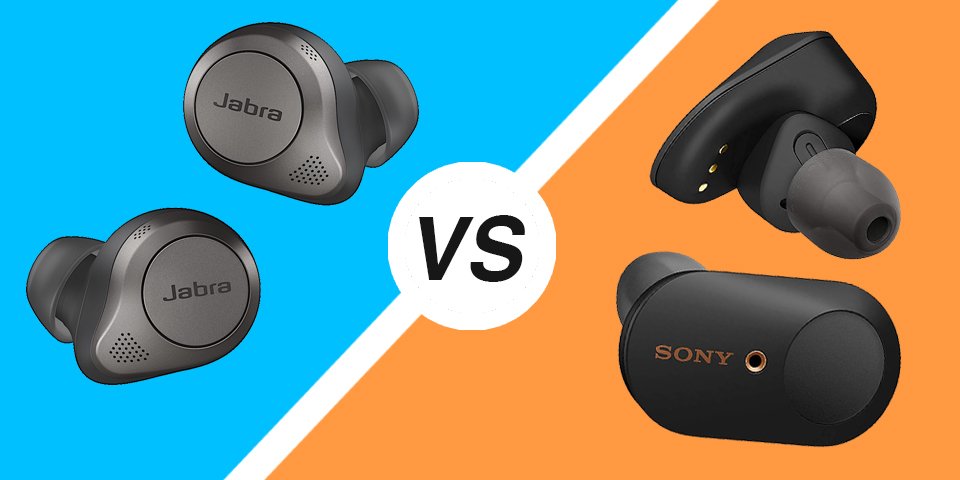 This leaves us to wonder how the Jabra Elite 85t will stack up against the popular Sony WF-1000XM3 ANC truly wireless earbuds. Both sets of earbuds seem to have similar specs and sit at the same price point. Should you wait for the release of the Jabra Elite 85t or should you get yourself the popular ? Let’s dive into the details of both sets of earbuds and find out.

Both the Jabra Elite 85t and the are premium sets of earbuds. They are semi-open earbuds which means they don’t provide the same kind of physical noise-canceling properties as in-ear headsets do. However, since the earpieces don’t need to be jammed into your ear canals, but rather, are nestled at the opening, they feel more comfortable than other in-ear ear tips. Both the Jabra Elite 85t and the come with a few additional ear tips in different sizes to ensure you get the best fit. The Jabra Elite 85t will most likely come with a pair of large, medium, and small silicone ear tips like the Elite 75t does. The comes with more additional ear tips; three pairs of foam tips and three pairs of silicone ear tips in different sizes.

In terms of weight, the Jabra Elite 85t is said to be a tad bit larger than the previous model, the 75t which weighed in at 5.5 grams per earbud. The weighs in at approximately 8.5 grams per earbud. Both sets of earbuds are considered compact, lightweight earbuds.

One of the biggest drawbacks of the is that it does not have any type of water resistance. You won’t be able to take them to the gym for a workout or walk outside under light showers. The Jabra Elite 85t, on the other hand, has an IPX4 water-resistance rating which makes them splash-proof.

The Jabra Elite 85t has a slight edge with larger 12mm drivers but in terms of ANC, both sets of earbuds do equally well with four-microphone feed-back and feed-forward technology.

The Jabra Elite 85t comes with large 12mm drivers that can produce clean bass and have higher sound output. On the , you only get a 6mm dome type driver on each earpiece. This doesn’t necessarily mean that the Jabra Elite 85t produces better sound. Good quality sound doesn’t depend on how large your drivers are, it depends on the quality of the drivers. And both Jabra and Sony are using some of the highest quality drivers on these earbuds. Although we have yet to get our hands on the new Jabra Elite 85t and actually compare the sound quality with Sony’s WF-1000XM3, it’s safe to say that these earbuds both produce roughly the same level of high-quality sound. Both sets of earbuds support SBC and AAC audio formats.

The Jabra Elite 85t and the come with really impressive active noise-cancelation (ANC) technology. They both have a six-microphone setup — three on each ear, a feed-back noise-cancellation mic on the inside, and a feed-forward noise-cancellation mic and regular mic on the outside. Both sets of earbuds have dedicated ANC chips for more accurate and efficient noise-cancelation. Sony calls this chip the QN1e while Jabra just labels it “dedicated ANC processing chip”. Both sets of earbuds allow you to switch from full noise-canceling to full transparency (allows you to hear your surroundings) with a single tap or push of the button. The Jabra Elite 85t allows you to adjust the level of transparency with its noise-cancellation slider on the Jabra Sound+ app.

Jabra didn’t release a lot of information about connectivity on the Jabra Elite 85t. The only thing we are sure about is that it comes equipped with the latest Bluetooth technology, Bluetooth 5.0. If the Jabra Elite 85t is anything like its predecessor, the Elite 75t, it should support the following Bluetooth profiles: HSP v1.2, HFP v1.7, A2DP v1.3, AVRCP v1.6, and SPP v1.2 with a range of up to 10 meters. It should also have Multi-Connect which is its ability to connect to two Bluetooth devices at a time. We also believe we’ll see the Elite 75t’s Auto-Pause Music feature on the Elite 85t, which automatically pauses your music when you remove one of the earbuds from your ear.

The has similar connectivity specs to what we believe will be offered on the Jabra Elite 85t. These include Bluetooth 5.0 with HSP, HFP, A2DP, and AVRCP profiles (missing SPP profile), a 10-meter connectivity range, Multi-Connect with up to two devices at a time, and Auto-Pause Music. The also boasts independent connections for each earbud. What this means is that each earbud is independently connected to your phone, resulting in a more stable connection and allowing you to use either earbud without the other. The ’s case also comes with NFC technology to make pairing much quicker.

Both the Jabra Elite 85t and claim to have very low latency but do not provide us with any technical specs on latency. On a test done with the , lag was found to be unnoticeable.

Button functions on both sets of earbuds can be customized in their respective apps. The Jabra Elite 85t is customizable on the Jabra Sound+ app and the on the Sony Headphones Connect app.

Both sets of earbuds have charging cases that can hold up to three full charges for your earbuds and have quick charging capabilities. They are powered via USB-C cable. The Jabra Elite 85t’s case is also wireless charging enabled and compatible with all Qi-certified chargers.

The Jabra Elite 85t takes the win over the with a very important extra feature — water-resistance.

The Jabra Elite 85t and the Sony WF-1000XM3 are two of the best options for truly wireless earbuds in the market today. They both offer everything you’ll need in a pair of earbuds such as great sound quality, active noise-cancellation, a stable wireless connection using the latest Bluetooth technology, customizable control buttons, and really good battery life. They even come with additional features like multi-connect to connect two devices at a time, auto-pause that automatically pauses your music when you remove one earbud to conserve battery, full EQ controls to customize the sound of your music and more.

But if we have to make a decision to get the or to wait for the release of the Jabra Elite 85t, we will go with the latter. This is because of one important feature that is lacking on the — water-resistance. Not being able to use your earbuds during workouts and fearing light drizzles while you’re out is a real bummer. But for those who will only be using the earbuds indoors while working or studying, this won’t be an issue.

📌 When will the Jabra Elite 85t be released?

The latest Jabra earbuds are expected to be available by November 1, 2020.

📌 When was the released?

📌 Is the Jabra Elite 85t waterproof?

The Jabra Elite 85t has an IPX4 water-resistance rating which means it is splash-proof but not submergible.

📌 What is the Bluetooth range of the ?

The has a wireless connection range of up to 10 meters using Bluetooth 5.0.

RELATED  Bose QuietComfort Earbuds vs Sony WF-1000XM3 (2021): Which ANC Earbuds Should You Get?