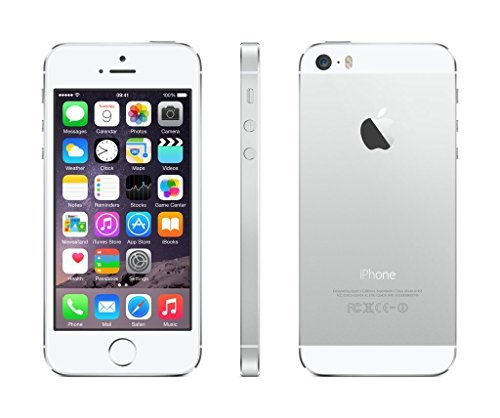 Apple iPhone 5s is a completely fascinating iOS device released back in 2013, which features a 4-inches multi touch capacitive display, a very powerful 64 bits Dual-Core processor ticking at 1.3 GHz, and 2 cameras, an 8 MP back side camera and a 1.2 megapixels front side camera.

Apple decided to equip this phone with a high-tech 1300 megahertz Dual-Core CPU, included in the Apple A7 system chip and only 1 GB of RAM which is a little poor comparing with this cellphone’s awesome CPU. Graphic calculations often uses lots of CPU time, so this cellphone counts with an additional PowerVR G6430 graphics processing unit running at 600 MHz to take some work out of the CPU. This device comes with a 64 GB huge internal storage and while it doesn’t have an external memory slot, it it is more than enough to install hundreds of applications without even thinking about how much memory is left.

Being just 0.3″ thick,this cellphone is extremely thin and practical. This phone is a bit heavy for a cellphone this size, weighting 3.95 oz. About its construction, this phone is mainly manufactured with Aluminium, giving it a quality finish and improved resistance. Apple offers this phone in 3 different color options, black, gray and gold.

Apple equipped the iPhone 5s with a high-tech 4-inches display, and a resolution of 1136 x 640 , which makes all images and videos look vivid and colorful. Its display uses IPS LCD capacitive technology, with a brightness of 500 candela/m2 and allows multi-touch gestures.

This device has Wi-Fi connection (and it can be provided to other devices around, acting as a router or modem), LTE 4G high speed data connection and also HSPA+ internet connection, which is a bit slower 4G variation or 3G fast internet connection, using HSDPA, HSUPA, UMTS and EDGE technologies. The iPhone 5s uses a Nano SIM card to use GSM services and it works with both GSM and CDMA networks.

The Apple iPhone 5s features two cameras, an 8 MP back side camera and a 1.2 mega-pixels front side camera. this cellphone’s back side camera has a f/2.2 aperture so it can capture beautiful photographs even in low-light conditions. It also captures 1920×1080 Full HD videos at 30 fps, and HD 1280×720 slow-motion videos at 120 frames per second (4 times slower than reality). In addition, this phone’s camera also has lots of cool features: flash, auto-focus, digital image stabilization, fast burst mode, HDR mode, face detection shooting, geo tagging and time lapse video.

This cellphone counts with a 1570 mAh medium sized Li-Ion non-replaceable battery that provides this cellphone a poor battery life. Apple claims this phone has a 10 hours talk time and a 250 hours stand by time. A big issue to evaluate is that this cellphone’s battery is non-removable so you can’t buy a new battery when it starts to lose its charge, having to replace the whole phone or hopefully take the cellphone to an expert who can open it and change its battery.

No matter whether you will use this device for work, are an amateur photographer, need a device to mainly use social networks and internet browsing or are looking for a gamer cellphone, this cellphone is the right choice for you. When you buy this phone you will also get Documentation, Lightning to USB Cable, Apple EarPods with Remote and Mic and USB Power Adapter.