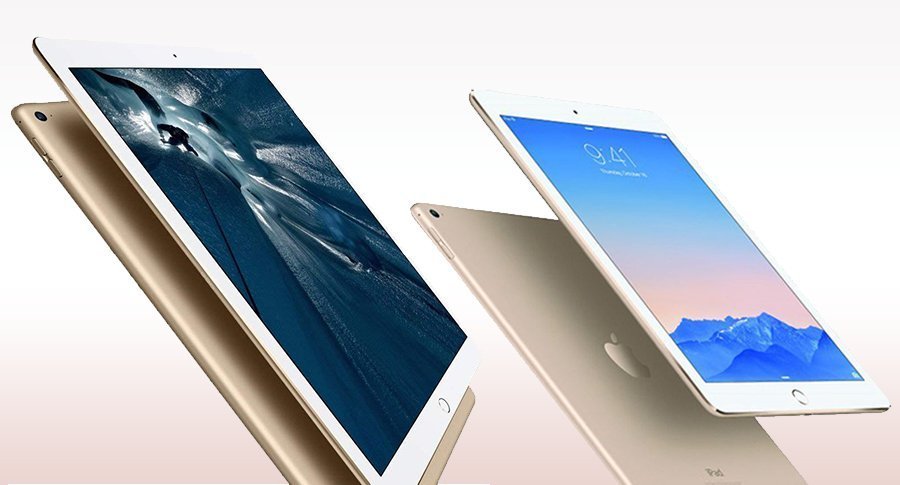 With close to a two-year gap between them, the iPad Pro 9.7-inch should be better than the iPad Air 2. But how much of an upgrade is it, and does it make the older iPad irrelevant or still worth buying? Below we discuss the improvements on the 2016 iPad Pro and if they’re worth the additional cost. By the end you should have a clear idea on which iPad is the better buy for your specific needs.

The iPad Pro 9.7-inch and Air 2 look the same, with just a couple of differences.

Other than two minor changes, the overall designs of these iPads are virtually the same. Both the iPad Pro and iPad Air 2 sport an excellent aluminum unibody with a high-quality slab of glass in front. Holding either will feel the same, since their dimensions and weight are identical, although because of their sleek finish you might consider getting a case for fall protection.

As indicated earlier, the two deviations in design are the inclusion of a smart connector as well as two more speakers. The three dots you can find at the side of the iPad Pro allow it to fully support accessories such as the Smart Keyboard. In addition, two more speakers can be found at the top edge of the Pro, while the Air 2 only has two at the bottom. Those four high-fidelity speakers will produce twice as much sound as the Air 2, which is great if you consume a lot of media on a tablet. You can totally immerse yourself in whatever music or movie you’re enjoying with the iPad Pro’s rich, wide, and detailed sound.

The iPad Pro 9.7-inch has a slightly better display.

Both iPads offer a 9.7-inch IPS LCD with identical resolutions and pixel densities, and they’re both stunning to look at. However, the iPad Pro has a few tricks up its sleeve that give it a slight edge.

First, its Retina display is 25% brighter as well as 40% less reflective than the iPad Air 2, making it easier to view indoors or out. Second, it has a wider color gamut that can generate up to 25% more color saturation. Finally and more importantly, it has a True Tone display, which measures the temperature of ambient light and dynamically adjusts its white balance to match. It allows the iPad Pro to offer a more comfortable viewing experience no matter where you use it.

Even so, display quality should not be much of a factor when deciding between the two, since the iPad Air 2 still has a topnotch screen.

Although both have 2GB of RAM, the dual-core A9X chip of the iPad Pro is clocked at 2.26 GHz, while the A8X chip of the Air 2 has it as 1.84 GHz. Moreover, the former has a 12-core GPU, or graphics processing unit, compared to the 8-core of the latter. On paper it seems clear that the iPad Pro 9.7-inch is faster than the Air 2, but real-world performance is what matters.

Running benchmark tests on both devices show the considerable difference in performance. The iPad Pro received a 3096 single-core score and 5299 multi-core score on Geekbench 4, while the Air 2 got 1842 and 4604, respectively. Pretty much everything you do on the iPad Pro will be faster than on the iPad Air 2, especially computing-intensive tasks.

We should note that the iPad Air 2 is already a powerful device, and for daily tasks such as browsing, reading, watching movies, etc., it’s just perfect. The extra speed of the iPad Pro should prove more useful if you’ll be doing heavy duty tasks such as editing high resolution videos.

The iPad Pro 9.7-inch has a great main camera and double the storage.

With the iPad Air 2, you get a mediocre rear main camera with 8 megapixels and an aperture size of ƒ/2.4. You’ll be able to record 1080p videos at 30 fps, or 720p slow motion videos at 120 fps. In comparison, the iPad Pro 9.7-inch has a fantastic 12 MP camera with an aperture size of ƒ/2.2, along with an advanced image processor for crisper photos. It will also let you record 4k videos at 30 fps, 1080p at 60 fps, and 720p at 240 fps, with cinematic video stabilization to remove stutters and shaking. These capabilities make it comparable to the camera of the iPhone 6S, which is particularly impressive since tablets are notorious for having terrible cameras.

While most people are still likely to avoid using tablets to take photos, if just for the reason that it looks silly, having an actually good camera attached to a huge 9.7″ Viewfinder is nice just in case. It shouldn’t influence your buying decision too much since you’ll bound to prefer using your smartphone for pictures.

Apple addressed the commonly issue raised of insufficient internal storage by simply doubling the capacity of the iPad Pro compared to the iPad Air 2. You can get up to 256GB for various apps, videos and photos. Runtime remains the same at 10 hours for both devices, something that Apple manages to keep consistent for all iPads.

You can only use the Apple Pencil and Smart Keyboard with the iPad Pro 9.7-inch.

Being able to use the Apple Pencil is a major feature and one that you should pay a lot of attention to when choosing between the 9.7 Pro or the Air 2. First off, it’s an accessory that can be purchased separately for roughly $100. Writing, drawing, and sketching with the Pencil will be extremely accurate. Along with delivering pixel-perfect precision with virtually zero lag, it has built-in palm-rejection technology that lets you rest your hand on the display without affecting the stylus’ input.

It’s a fantastic add-on for those interested in using a tablet to create art or take notes. Not only will you get a close-to-natural sense of writing and drawing, you can also digitally enhance your work all in one place. You won’t be able to do the same on the iPad Air 2, as it doesn’t support the Apple Pencil. This makes the iPad Pro 9.7-inch the clear choice for serious artists, as well as students and professionals who prefer writing to typing but want to save their notes in digital format.

Another Apple accessory that only works with the iPad Pro is the Smart Keyboard, which also doubles as a lightweight yet durable cover. The smart connector on the iPad Pro lets it have plug-and-play functionality as it transmits both data and power. You’ll be able to simply attach the iPad Pro on the Smart Keyboard and not worry about plugs or pairing. On the other hand, you’ll be able to get cheaper third-party keyboards for the iPad Air 2, but all of them will need to be separately charged as well as manually paired before they can be used.

Get the iPad Pro 9.7-inch if you want to use the Apple Pencil. Otherwise, the iPad Air 2 offers better value.

Despite all of the improvements the iPad Pro has over the Air 2, the biggest reason most people will gravitate toward it is the Apple Pencil. It works so well that even professional artists compare it with the , the industry standard for pen tablets. If you’re really looking to get creative with a tablet, the iPad Pro 9.7-inch is a great choice.

Of course, it comes at a price, and it’s more relevant for these two than in other tablet comparisons. Consider the price heavily since the iPad Pro is a lot more expensive than the Air 2. Factor in the cost of the Apple Pencil and/or Smart Keyboard, and it’s a significant difference indeed in what you’ll be spending.

If you need more power, better cameras, and better sound in a tablet, you can find it in the iPad Pro 9.7-inch. Otherwise, the average user will find the iPad Air 2 perfectly capable for everything they intend to use it for. It’s powerful and fast enough to run great-looking games and play high-res movies, and you can either save a lot or get more storage for your budget.

RELATED  Kindle Paperwhite vs iPad (2022): Which Reading Device Should You Get?