iPad Air vs iPad 5th Generation: Same Outside, Different Inside 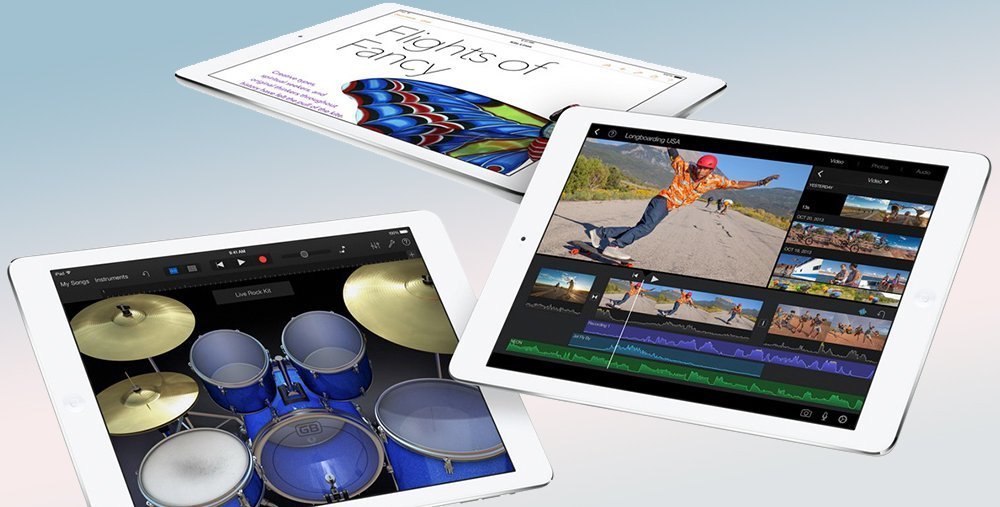 With almost a 4-year gap between their release dates, the iPad 5th Generation, also referred to as the 2017 iPad, should prove to be the significantly better tablet over the iPad Air. However, the only way we can be confident about this assumption is by comparing their specs and putting them through the same benchmarks. We did just that below so you can easily get a clear idea of their capabilities if you’re deciding on which one to get.

Both iPads look and feel the same.

Simply checking the dimensions and the weight of each device confirms that they are physically the same tablet when held. Since the iPad Air was intended to be the lightest, thinnest tablet of its time, this is actually an advantage for the iPad 5th Gen. You get to enjoy a lightweight tablet that packs more power inside.

There are minor differences between the two though: notably the visible icon on the Home button of the iPad Air. It’s gone from the iPad 5th Gen since it features a Touch ID sensor. Apple also did away with the physical switch on the iPad Air which toggles Rotation Lock or Mute, moving those controls instead within the interface of newer iPads. The holes for the mics are also smaller on the 5th Gen, and there’s only a single row of holes for the speaker. You also get another color choice in addition to the Space Gray and Silver case options — a Gold back with a white front.

Once again, the iPad 5th Gen offers no significant improvement over the iPad Air, as they both use the same 9.7-inch Retina display with matching resolutions and pixel density. That’s not a bad thing, of course, since the iPad continues to offer the best looking display among its contemporary tablets. However, it’s a bit of a downside for the 5th Gen since the iPad Air 2, which was released the year prior, featured a fully laminated display with anti-reflective coating. Instead of using the same technology, Apple opted to put the first Air’s non-fused display inside their 2017 update of the iPad.

With nearly the same physical build and display, it does seem like the iPad 5th Generation and the iPad Air can be identical twins. Thankfully, the story takes a turn once we delve inside their covers.

The iPad 5th Generation is nearly twice as powerful.

In terms of real-world performance, we can look to benchmark tests to see how all these numbers add up. Geekbench 4 gave the 5th Gen a single-core score of 2539 and a multi-core score of 4383, while the iPad Air got 1357 and 2299, respectively. On AnTuTu, the iPad 5th Gen scores 124669 overall, double what the iPad Air received at 66998. Even running these benchmarks took the iPad Air several seconds longer to complete. Needless to say, you can expect faster loading and smoother game graphics on the 2017 model of the iPad. It’s easy to tell the difference if you actually attempt to open the same app on both devices side by side.

Taking photos and videos with the 5th Gen iPad should produce better results, as both of its cameras have an edge over the iPad Air’s. Its front 1.2MP camera has a bigger aperture size of ƒ/2.2 than the ƒ/2.4 of the latter. In addition, you can get 8-megapixel photos with the 5th Gen’s main camera, versus the 5-megapixel limit of the iPad Air.

Internal storage choices are trimmed down to two for the iPad 5th Gen, which simplifies its price points. It also has a slightly larger battery capacity, but it’s not enough to consider an improvement since battery life remains the same at 10 hours of multimedia use. The addition of a barometric sensor is also only relevant if you actually use apps that require that feature.

One notable feature that was added to the 5th Generation iPad is the Touch ID sensor, as it provides tougher security as well as faster screen unlocking while enabling limited Apple Pay capabilities.

The iPad 5th Generation gives you twice the power within the same build.

What it comes down to is that Apple essentially upgraded the iPad Air with faster internal components and released it as the 5th Generation iPad. They turned what was once their high-end offering into their next entry-level model, which makes our recommendation easier.

Currently, you’ll only be able to find these iPads in the refurbished market, and with the iPad Air being older, it will definitely be priced lower at the same storage price points. However, the difference isn’t actually too far apart (as you can see in the links above), and we can safely say that the faster performance of the iPad 5th Gen is worth the extra cost, and will provide you better longevity with your device in the long run. That said, if internal storage is your biggest consideration, you can get a lot more with your budget by choosing a 128GB iPad Air, which is priced closer to the 32GB iPad 5th Gen.