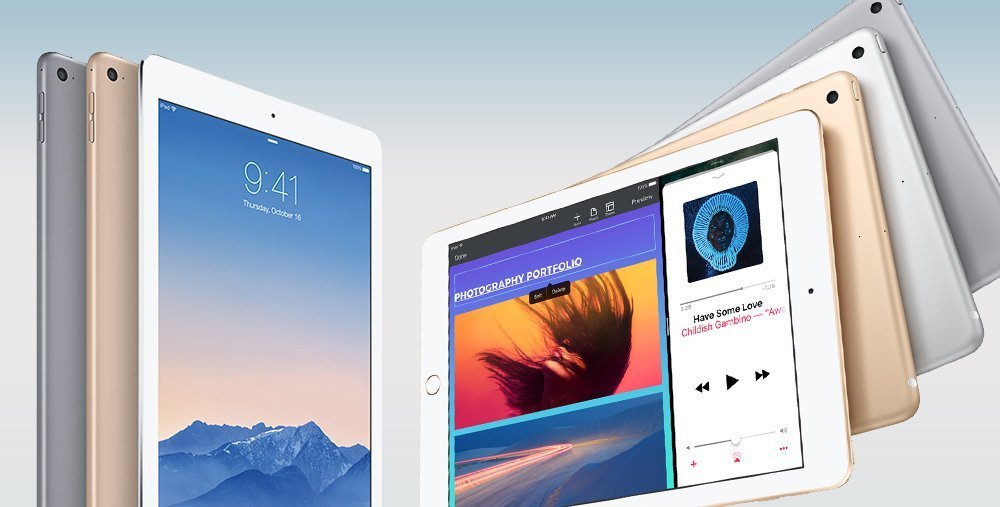 When Apple released the new generation of the iPad in 2017, experts weren’t thrilled that its specs and list of features didn’t indicate much of an upgrade over the previous year’s iPad Air 2. On paper the 2017 iPad should outperform the iPad Air 2, and testing proved that to be so. However, just how much faster is it really, and does that make it the better buy? Below we compare the iPad Air 2 vs iPad 2017, and make recommendations on which one to purchase.

The iPad Air 2 is lighter and thinner.

As Apple intended, the iPad Air 2 is still one of the most lightweight tablets out there. The two devices have identical dimensions when viewed up front, but the iPad 2017 is noticeably thicker, which can be attributed to its bigger battery. Holding them up in one hand makes the difference even clearer, as the Air 2 is just lighter. It’s not much, but if you prefer a lighter tablet that you’ll be using for prolonged periods of time, the iPad Air 2 will be better.

The newer iPad still retains the excellent aesthetics of the Air 2 — a sleek metal finish in Space Gray, Silver, or Gold, with Touch ID sensor and other button placements remaining where they used to be. The mics were moved to different spots though: the iPad 2017 model has mics along the middle of its top edge and at the back, while the iPad Air 2 has mics beside the volume buttons and near the rear camera.

The iPad 2017 model is brighter, but the iPad Air 2 is less reflective.

Both iPads use the same gorgeous 9.7-inch Retina display with the same resolution and pixel density. Their only difference is in how they were made: the iPad Air 2’s display is fully laminated, meaning it’s all fused together so graphics look closer to the screen. It also has an additional anti-reflective coating, which makes it easier to view under bright outdoor light. Apple opted not to do the same for the 2017 model since keeping the touchscreen assembly and display module separate makes it easier to repair. To compensate, they instead increased the maximum brightness on the newer iPad by about 40%.

All in all, you’ll only notice the difference when you use the iPad outside. Under indoor lighting both devices will look crisp and fantastic. If you’re concerned about the display sustaining potential damage, getting a tough cover case should work well as a preventive measure for either.

Here’s where the iPad 2017 edition actually received significant upgrades. It has an A9 chip with M9 motion coprocessor, whereas the iPad Air 2 has an A8X and M8 combo. Together with a newer GPU, the 2017 iPad can open apps faster, handle intensive computing processes better, and make game graphics smoother.

Benchmark testing confirmed this: the newer iPad received a 2562 single-core score on Geekbench 4 while the Air 2 only received 1834. It scored better on the Compute benchmark for the GPU as well, with 9764 vs 7590. Using another benchmark app reflected the same results, as it got a 126585 score on Antutu vs 103285. What all this amounts to is that the 2017 iPad makes for a better gaming tablet choice. You’ll be able to load games faster and get more frames per second on 3D-intensive apps. However, it’s hard to tell the difference when using other apps, since both are just as responsive.

Both iPads have the same cameras and similar storage options.

Both tablets use the same front 1.2MP FaceTime HD and rear 8MP iSight cameras with identical megapixel resolutions. Choosing internal storage capacity is simplified on the 2017 iPad with just 32GB and 128GB, but you can get the same on the Air 2. The thicker 2017 model gives room for a bigger battery capacity, which its more powerful CPU needs. Battery life is rated the same though at up to 10 hours of multimedia use.

The iPad 2017 model isn’t significantly better than the iPad Air 2.

As you can see, the only area where the iPad 2017 model is ahead of the Air 2 is its computing power, which most users will hardly notice given the Air 2 still offers plenty of speed. So, which tablet is a better buy? Given that both are now only available as refurbished items from third parties, their prices are actually close enough to each other that the better choice for you will depend on what you want to do with it.

If you’re looking to play graphics-intensive games a lot on your iPad, the 2017 model is the superior choice and should offer you a better gaming experience. The same applies for apps that require more computing power. For nearly all other cases, the iPad Air 2 will give the same performance, with the upside of being lighter, thinner, and easier to see under bright light. If you like bringing a tablet outside or just want to watch movies or read books, you’ll be able to score a bigger storage capacity on the iPad Air 2 with the same budget.