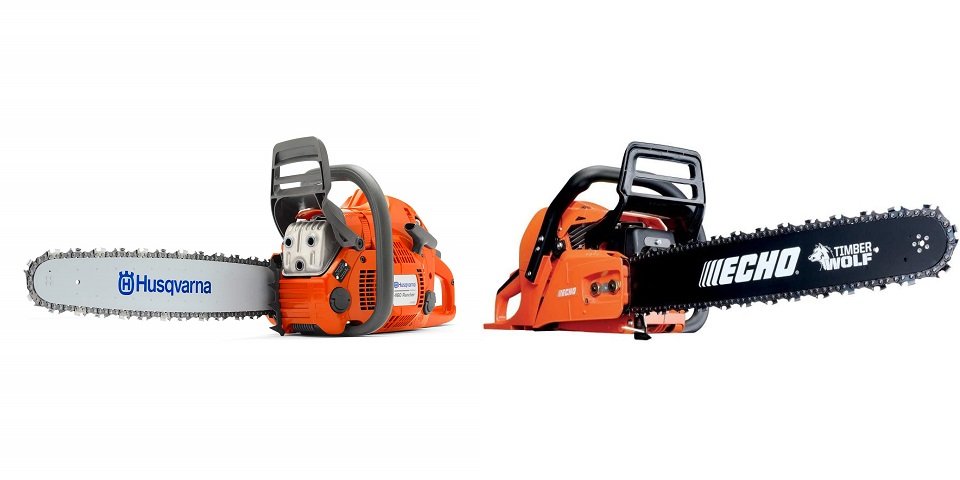 Husqvarna and ECHO are two of the manufacturers that most people turn to for chainsaws. That’s because they’ve got a good track record when it comes to these power tools. Thing is, it’s hard to say which brand is better overall. At that, we compare each of their own most popular midrange offerings: Husqvarna’s 460 Rancher and ECHO’s CS-590 Timber Wolf. That way, you can get a clear picture of what each company can bring to the table based on the quality of their products.

Even though it’s lighter, the Husqvarna 460 Rancher has a bigger engine than the ECHO CS-590 Timber Wolf.

Both chainsaws pack a lot of power with their two-stroke engines. However, the Husqvarna 460 Rancher beats the ECHO CS-590 Timber Wolf because of its better power-to-weight ratio.

On top of that, Husqvarna’s X-Torq engine system makes the 460 Rancher energy efficient while reducing emission levels. What that means for you is you won’t have to refill it that often.

ECHO is known for making powerful and simple-to-use chainsaws, while Husqvarna made its name by prioritizing safety and making sure their tools can do the job.

Every Husqvarna chainsaw comes with the company’s LowVib feature. As its name suggests, it reduces vibration levels. As a result, it minimizes fatigue on the operator. The CS-590 Timber Wolf has something similar, but ECHO doesn’t exactly spell it out. It doesn’t even publish vibration measurements.

Husqvarna highlights things like the 460 Rancher’s ergonomic front handle and felling marks for better handling and cutting precision. Its chainsaw even has features like Smart Start and Air Purge to make starting it a breeze.

Meanwhile, ECHO puts the spotlight on the CS-590 Timber Wolf’s bumper spikes and decompression valve for easier control and starting.

Maintenance and lubrication are a safety basic, and both chainsaws have features that make it simple.

The Husqvarna 460 Rancher and ECHO CS-590 Timber Wolf come with easily accessible air filters and automatic adjustable oil systems. Thanks to those, you can maintain and lubricate them with minimal effort. It goes without saying that chainsaws in tip-top shape are safer to use.

In addition, both chainsaws also have a chain brake to keep injuries at bay. For instance, this works by stopping the chain when you hit a portion of a log or tree that’s too hard for the chainsaw to cut. The same thing also happens if you accidentally drop the chainsaw.

Husqvarna can really tick all the right boxes.

This comparison between the Husqvarna 460 Rancher and ECHO CS-590 Timber Wolf should give you a sense of what to expect from each brand. While both are good in their own right, we’ll have to pick Husqvarna here. Put simply, it adds a lot more features to the mix while getting the basics down pat.

1 thought on “Husqvarna vs ECHO (2021): Which Manufacturer Should You Buy Your Next Chainsaw From?”

From the latest Husqvarna gas chainsaws to top-rated electric cordless chainsaws, here at Compare Before Buying we are passionate about everything sawing related.