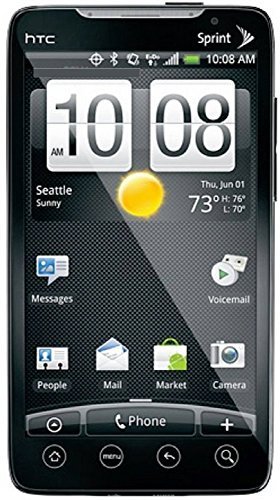 HTC EVO 4G is a not so powerful phone launched in 2010, having a 4.3″ multi-touch screen, a CPU running at 1 gigahertz, and 2 cameras, an 8 megapixels back-facing camera and a 1.3 mega-pixels front-facing camera.

In this case, HTC forgot about optimizing the weight, leaving it live with a weight of 6 oz. The HTC EVO 4G is only 4.8 inches long, but it manages to hold a 4.3″ display.

This cellphone has a very good 4.3″ screen with a 800 x 480 resolution, giving this device a nice graphic quality. This screen uses TFT capacitive technology, and allows multi-touch for gestures like pinch and zoom.

HTC ships this cellphone with a quite powerful processor running at 1000 MHz, included in the Qualcomm Snapdragon S1 QSD8650 chip and 512 MB RAM memory. Graphic calculations usually consume a lot of processor time, so the HTC EVO 4G uses an additional Adreno 200 GPU ticking at 128 MHz to improve overall performance.

This device has two cameras, an 8 megapixels back-facing camera and a 1.3 megapixels front-facing camera. It is also able to capture HD 1280×720 videos. The camera also counts with flash and auto-focus.

The HTC EVO 4G has Wi-Fi connectivity (and it can share it with other devices as a mobile hotspot) or 3G connection type, supported by EV-DO A technologies. This phone doesn’t use a sim card, because it doesn’t work with GSM connections and it can work with CDMA carriers.

This cellphone has a medium 1500 mAh Li-Ion replaceable battery, which isn’t very promising for a demanding cellphone like this.

The HTC EVO 4G also comes with many interesting features like Bluetooth (2.1, EDR), GPS (Global Positioning System), NFC (to trigger actions, transfer data or make payments by holding your device close to another NFC device or tag) and Radio, and multiple sensors like Light Sensor, Proximity Sensor, Accelerometer and Compass.