Once you have a hot tub installed at home, it’s super important to keep it clean. Regardless of whether it’s above ground or in-ground, you’ll need to keep your water filtered and sanitized so that it’s safe for use anytime.

When it comes to sanitizing your hot tub, there are two big choices available on the market. The most well-known chemicals suited for this job are chlorine and bromine. Read on to find out what the difference is between the two, and which one is better suited for you.

Even if the products you see online are just called “chlorine” or “bromine”, they’re not actually pure tablets or concentrates of those two elements. You’ll notice that your hot tub sanitizer’s container has small text indicating its active ingredient, which is most likely a salt of either element. They’ll have long names like “sodium dichloro-s-triazinetrione dihydrate”, which isn’t really marketable, so companies stick to “chlorine” or “bromine” instead. The most important (and maybe the only) thing you’ll need to know when it comes to their chemical characteristics is how do the differences affect how they work?

Let’s begin with chlorine. When you add those chlorine tabs to the water, it oxidizes the contaminants. This means that the chlorine in those tabs invade and destroy the contaminants, but in the process, they end up creating by-products called chloramines. These chloramines are to blame for the characteristic chlorine smell that most people are familiar with from pools they’ve been to in the past. It’s easy to deal with them though, since you’ll only need to add more chlorine (most of the time, at least) to get rid of the chloramines. If they’re a bit more persistent, though, you’ll need a spa shock. 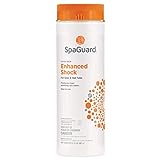 Bromine, on the other hand, works by ionization. When contaminants are ionized, their chemical bonds are broken. Even when they combine with contaminants and form the by-product bromamine, they’re still quite effective as sanitizers. Using tub shockers is still recommendable though, depending on the bromine levels in your tub.

You can get an idea of how effective your chosen tub sanitizer is by looking at its reactivity rate. This refers to how fast it can destroy the contaminants in your tub’s water. As mentioned earlier, chlorine is more reactive, so you’d expect that it’s quicker at dealing with contaminants. Chlorine’s oxidation reaction is really quick, so you wouldn’t be exactly wrong.

However, more goes into effectiveness than just its speed. While it’s a tad slower than chlorine, bromine does have a larger atomic size and an extra valence shell. These characteristics are what make it possible for even the bromamine by-products to be sanitizers, although slightly less effective ones. Online reviews say that chlorine is better for dealing with algae, while bromine deals with bacteria faster.

When it comes to price, chlorine wins over bromine. Online prices have chlorine and bromine cleaners of the same type and quantity with a difference of around 20%. It gets even cheaper for chlorine tabs when you buy these in bulk, with savings going up to 40%. However, it’s worth noting that chlorine is much more reactive (which we’ll talk about later). This means that it has a shorter shelf life, and it can lose half of its power in storage before even being used.

As for convenience, the two are arguably equally matched. Since they come in both solid and liquid concentrate forms, it’s up to you to decide what kind of cleaner suits your tub needs better. Using additional accessories like floating dispensers add to the convenience. Bromine does need a build-up or a “bank” of bromide ions in your water to be fully effective, though. For this, you’ll need to buy some bromide booster and add it to your tub.

Bromine is more stable and more suited to high temperatures.

Bromine may be more vulnerable to the sun and UV rays in general, but it’s still mostly more stable than chlorine. This means that it stays longer in your water (with the exception of when you deplete your bromide banks while draining your water). It’s also not as vulnerable to differences in the pH levels of your water, unlike chlorine which can become only 25% effective in higher pH water (around 7.8). While it is less reactive, the higher stability of bromine means that it’s also generally friendlier to your skin and the clothes that you’re wearing.

Dosage really depends on your tub’s size. However, speaking generally, you will need more bromine in your tub (plus the bromide bank starters) than you would chlorine. Chlorine is effective at around 1 to 3 ppm (parts per million), while bromine needs around 5 ppm for your tub to be cleaned.

Bromine is the best choice for hot tubs. It lasts longer, is more skin-friendly, and is generally more effective overall than chlorine. They’re also more stable, meaning that they generally last longer in your hot tub’s water. However, you will have to take note of its higher price and required dosage ppm. It’s also important to remember the additional things you’ll need, like a bromide bank starter and spa shocks.

Chlorine, on the other hand, is more reactive, so it works faster. The price of faster cleaning is a shorter shelf life, stronger odor, and more frequent replacement. It’s also less effective at dealing with bacteria and viruses than bromine, though it is better at removing algae. For this reason, it might be better to go with chlorine if you have a pool instead of a hot tub.

📌 Are bromine and chlorine the same?

Bromine and chlorine are different elements. They also work differently in hot tubs: bromine ionizes contaminants while chlorine oxidizes them.

📌 Do I need bromine in my tub?

If you don’t already have a hot tub sanitizer, then yes, you will need bromine in your hot tub.

📌 Can you switch from chlorine to bromine in a hot tub?

Yes, though you’ll have to make sure that there’s no residual chlorine before adding your bromine, and vice versa.

📌 What is better for a tub, chlorine or bromine?

Bromine is generally more effective and more stable, while chlorine provides a faster clean but shorter shelf and tub life. It depends on you and what you prioritize for your hot tub cleaning experience.