Getting strong Wi-Fi coverage in every part of the home is now much easier thanks to mesh Wi-Fi systems such as Google Wifi and Ubiquiti AmpliFi HD. Even better, they no longer look like tech equipment you’d much rather keep hidden. With sleek designs and unobtrusive forms, you’d be proud to set these routers up in central areas of your home. So which of these two top-performing Wi-Fi mesh systems should you get? Check our comparison below. 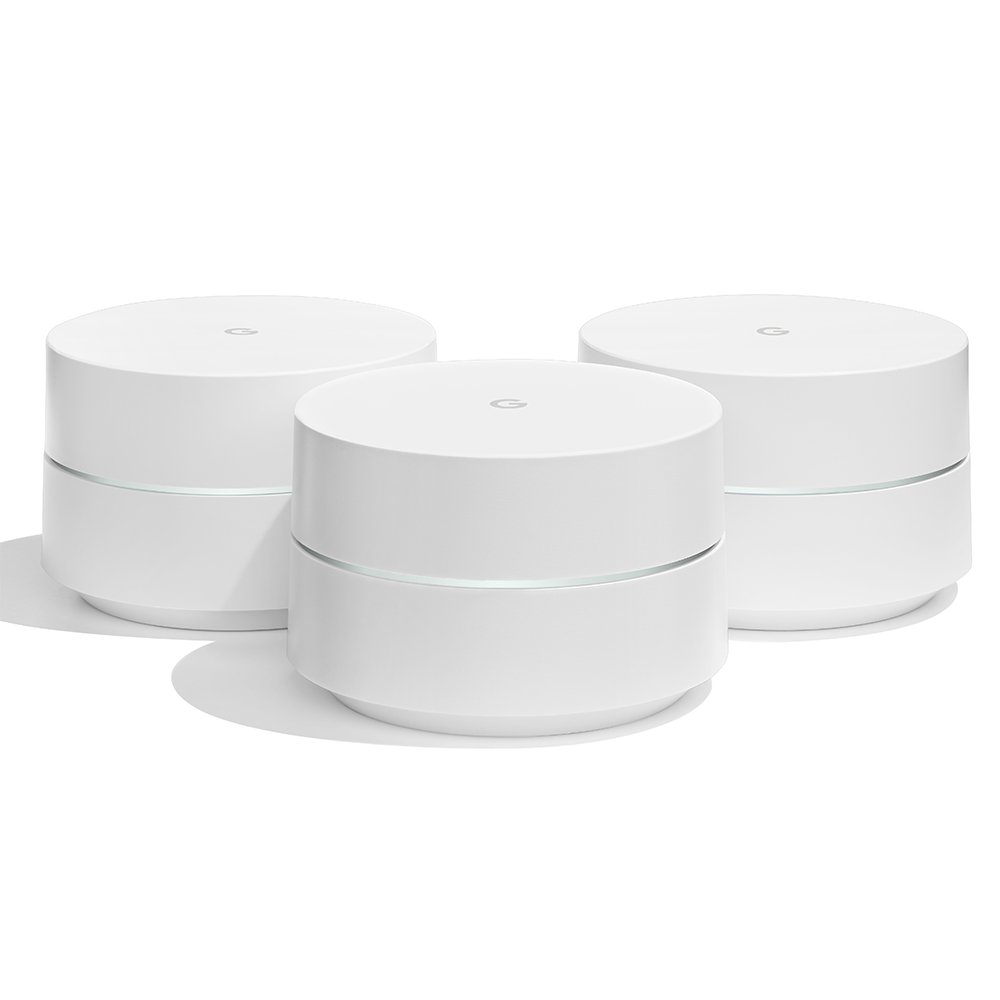 The Google Wifi has a simpler, less cluttered design than the Ubiquiti AmpliFi HD.

Design is a pretty interesting aspect to compare for these mesh Wi-Fi routers since they’re so different in approach. The Google Wifi system uses nodes that can either be the primary Wi-Fi point or the satellites. As such, each of its mesh routers are identical to each other. They’re all flattened cylinders with an LED strip around the middle, and overall, their simple lines and unobtrusive form is a positive anywhere you place them.

To compare, the Ubiquiti AmpliFi HD mesh system has a distinct main router and satellite design. The primary mesh router is a sleek cube with a circular LCD screen that displays the network’s up and down speeds. It definitely stands out in a good way, but the satellite nodes are very different in design. They’re like enlarged aerials that are intended to be plugged directly to an outlet.

Because of its tall and slim form as well as direct plug requirement, you’ll be a bit limited on where to place the mesh points for the Ubiquiti AmpliFi HD by where your wall sockets are. In comparison, the Google Wifi mesh nodes are more flexible in terms of placement due to their power cables.

Another important difference is that the LAN Ethernet ports on the AmpliFi HD are all on the main router. It has four such ports so you can plug several devices in, but it can again be limiting on where you can place it. In contrast, the Google Wifi mesh points have one WAN and LAN Ethernet port each, so any of them can be the main router and you can get a physical connection on satellite nodes.

In terms of pure coverage area, the Ubiquiti AmpliFi HD mesh system is able to broadcast Wi-Fi signals much further than the Google Wifi system. Ubiquiti lists the range of the AmpliFi HD whole home Wi-Fi as up to 10,000 sq. ft., while the Google Wifi’s 3-pack covers only up to 4,500 sq. ft. If you have a larger-than-average home, you’ll want to be able to stretch out Wi-Fi coverage as much as you can to remove dead spots.

For smaller to average-sized homes, the Google Wifi will be more than enough, though, and you can save a lot if you only need one mesh point as Google offers single nodes. As mentioned, the satellites for the Ubiquiti AmpliFi HD require a direct-to-socket placement to get power. What this means is they’ll usually be set at floor-level heights which can impact overall range of the signal.

We’ve also touched on the availability of LAN Ethernet ports on both Wi-Fi systems. Depending on the number of devices you want to plug in, such as 4K TVs, gaming consoles, printers, etc., and where they’re going to be, either the Google or Ubiquiti systems will be more appropriate or else require less rewiring.

The Ubiquiti AmpliFi HD has a higher maximum speed than the Google Wifi.

With an AC1750 Wi-Fi rating, the Ubiquiti AmpliFi HD system has a higher 1.7 Gbps speed cap than the Google Wifi AC1200 mesh, which only goes up to 1.2 Gbps. In reality though, these speeds only really matter if you have a very high Internet plan from your ISP, such as upwards of 300-400 Mbps. Most homes won’t be subscribed to that, though, which is likely the reason Google opted for a lower Wi-Fi rating. 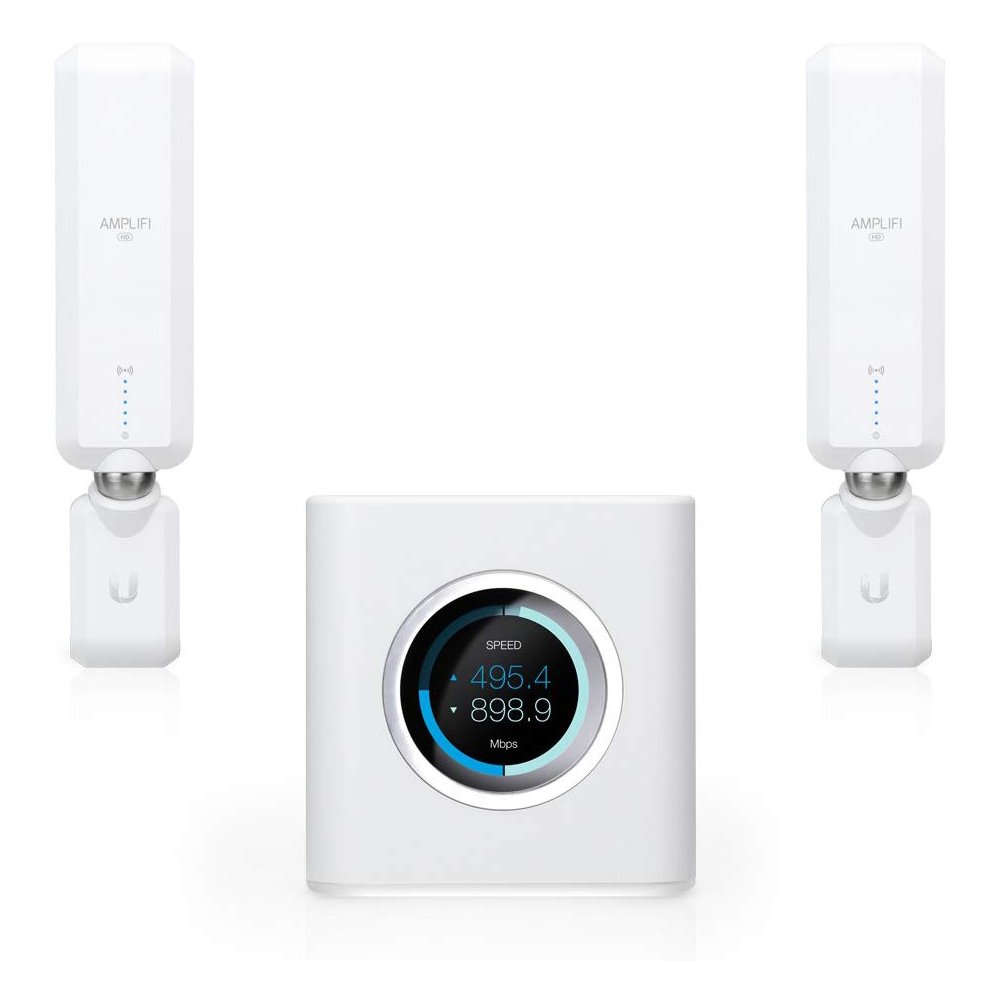 Furthermore, setting up a 3-pack Google Wifi system around the house will result in stronger and faster connections due to the overlapping radio signals. You’ll be able to achieve the same on the AmpliFi HD package, though it’s less cost-effective to do so and it’s better suited or at least targeted at giving larger homes consistent Wi-Fi.

Note that your own home’s layout and building materials can play a large role in the overall Wi-Fi strength that you can get with either mesh network. Long and narrow hallways as well as thicker materials such as slab and metal siding will negatively impact signal broadcast. Note also the availability of sockets and where you can place mesh points since the individual design of the Google Wifi and Ubiquiti AmpliFi HD nodes affects them.

The Google Wifi has a simpler interface and is easier to setup than the Ubiquiti AmpliFi HD.

One of the best things about the Google Wifi mesh system is that it’s very easy to setup compared to most other routers. Google focused on making mesh Wi-Fi networks simpler to get up and running for homes. You simply download the Google Wifi app and follow its instructions and you’re basically done. Network settings and other controls are also laid out in a user-friendly interface.

The Ubiquiti AmpliFi HD mesh router system is also relatively easy to set up, though you’ll have to run through separate steps to get the satellites connected. There are a lot more network settings you can customize on the web browser interface though most users won’t touch these due to lack of technical know-how. As such, you’re able to access a bit more extra features and tweaks on the Google Wifi system.

The Ubiquiti AmpliFi HD is better for larger homes but we recommend the Google Wifi otherwise.

Those who require a strong Wi-Fi router that can encompass wide areas and multiple floors will get better wireless connections with the Ubiquiti AmpliFi HD. With its more powerful aerials you can cover a lot of ground and say bye-bye to dead zones in and around your home. As long as the satellite placements work well for you, and they’re not in danger of being moved by kids, dogs, etc., you’ll get faster wireless speeds in every room.

For everyone else the Google Wifi mesh router system will be a more cost-efficient solution. It not only costs a lot less, you can choose how many mesh points you’ll get and later on expand as needed. It’s easy to setup and manage, and you can find everything you need on the mobile app, making it very friendly for most homes.

📌 Which is better: Google Wifi or Ubiquiti?

The Google Wifi mesh network solution has proven to be more cost-efficient and easier to setup for the majority of homes. If you have a larger area to cover, the Ubiquiti AmpliFi HD system might perform better in improving signal strength.

Yes, Google Wifi will not hinder any VPN service you might use.

No, the Ubiquiti AmpliFi HD only has a dual-band radio.

📌 Does AmpliFi HD have a firewall?

Yes, Ubiquiti equips all of its AmpliFi routers with a built-in firewall to protect your home network.