From the look of things, Samsung is going with a slimmer profile for the Galaxy Watch3. In comparison, the rugged Gear S3 frontier will be bulkier, while the classic version will be closer in appearance. Regarding durability, you’d be hard-pressed to break the Galaxy Watch3, unless you take a hammer to it. For starters, it’s MIL-STD-810G and IP68 certified. Also, it has a Gorilla Glass DX to protect its AMOLED display, which measures 1.2 and 1.4 inches for the 41mm and 45mm variants, respectively. The Gear S3 has MIL-STD-810G and IP68 certifications as well. However, it’s not recommended to be used for swimming, unlike the Galaxy Watch3, which even has swim tracking (more on that later). As for its screen, it’s a 1.3-inch AMOLED with a layer of Gorilla Glass SR+ on top. Another piece of good news is the Galaxy Watch3 having a rotating bezel, just like the Gear S3.

The Galaxy Watch3 has an LTE model.

In terms of connectivity, it’s no surprise the Gear S3 is lagging behind a bit. Launched in 2016, it does have a couple more years on the Galaxy Watch3. That said, it has Wi-Fi, Bluetooth 4.2, and LTE (which is available only on the Frontier model). Compared to that, the Galaxy Watch 3 has Wi-Fi, Bluetooth 5.0, and LTE. Both have NFC, and needless to say, that means you can use Samsung Pay on either one. The two also have built-in GPS, so you won’t have to bring your smartphone along when, say, you’re out for a run. Speaking of, you can also use Spotify offline on the Gear S3, just like on the Galaxy Watch3.
Deal Finder 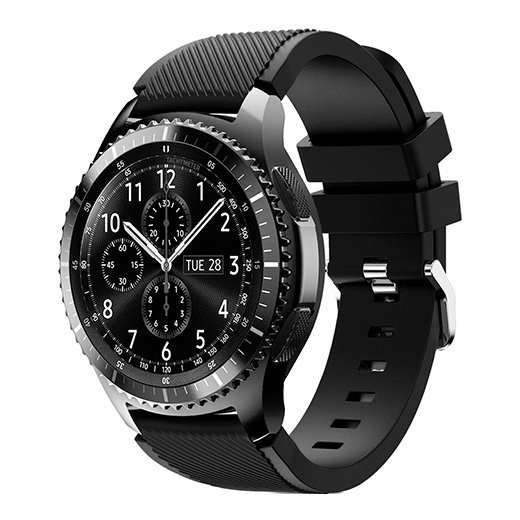 Check Price on Amazon
We are reader supported. When you buy through our links we may earn an affiliate commission.
The Gear S3 has a lower 768 MB RAM than the Galaxy Watch3’s 1 GB. However, it does have a larger 380 mAh battery pack, which is rated to last up to four days. On the other hand, the Galaxy Watch3 has 247 mAh and 340 mAh for the 41mm and 45mm variants, respectively. That’s the same as the Galaxy Watch Active2, meaning you’ll more or less get the same two-day battery life. They’re so similar, in fact, that the Galaxy Watch3 will even be compatible with the chargers for the Active series.

The Galaxy Watch 3 has more advanced sensors than the Gear S3.

The two have the usual trackers and sensors, including a pedometer and altimeter, among other things. The biggest difference here is that the Galaxy Watch3 has a blood pressure monitor and ECG. On top of that, the Galaxy Watch3 has swim tracking too, capable of going up to 50 meters underwater for 10 minutes. Meanwhile, Samsung says the Gear S3 isn’t suitable for swimming. That’s despite having a water resistance of IP68 as well.

The new features of the Galaxy Watch3 make it a worthwhile buy.

Samsung already made the Gear S3 pretty smart to begin with. For instance, you can read messages, pick up calls, and things like that. Being years apart, it goes without saying that the Galaxy Watch3 builds on the Gear S3 in a lot of ways. It has a new weather app and music widget. It’s also switching to Microsoft Outlook from Samsung Email and boast an integrated speaker for audio prompts. That’s not all either. New watch faces are in the pipeline too, but the crème de la crème here are the variants that support something called “Informative Digital Edge.” Put simply, select watch faces will show activity, heart rate, and more around the edges. You can also customize the colors and pick what info you’d like to be displayed.

The Gear S3 has a lot to offer, but the Galaxy Watch3 has even more.

Check Price on Amazon
We are reader supported. When you buy through our links we may earn an affiliate commission.
The Samsung Galaxy Watch3 blows the Gear S3 out of the water, and it’s our recommended pick, especially if you’ve got the cash for it. However, that doesn’t mean the Samsung Gear S3 is out of the race just like that. If you’re new to the world of smartwatches, it’s an excellent choice to dip your toes into the whole thing. It’s more affordable, and it has enough smarts to give you a full experience. In other words, you won’t be breaking the bank just to see whether smartwatches are for you. But if you already own the Gear S3, it’s a good time to stop holding off and upgrade.

The Galaxy Watch 3 is definitely better than the Gear S3, thanks to its new features and fitness tracking capabilities, among other things. However, that’s based only on rumors at the moment.

📌 Is the Galaxy Watch 3 worth the wait?

If the rumors hold true, then yes, the Galaxy Watch 3 is worth waiting for. New features and a more robust fitness tracking system make it a good buy.

Yes, especially if you don’t own a smartwatch yet. The Gear S3 has a lot of features and fitness tracking options to offer. Also, it isn’t lagging behind that far compared to newer models.

📌 When is the Galaxy Watch 3’s release date?