The original Fitbit Versa was a nifty fitness tracker and smartwatch hybrid which gained quite a following with its highly attractive price. Thankfully, the follow-up the Fitbit Versa 2, is every bit as good, and it’s upgraded in all the right places. Here’s what you need to know to decide whether to get the standard Versa 2 or go for the Fitbit Versa 2 Special Edition. 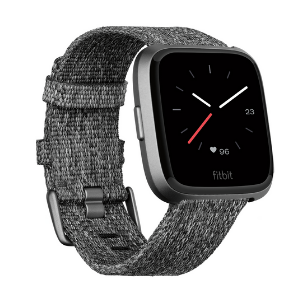 The Fitbit Versa 2 Special Edition smartwatch includes a Jacquard woven band in addition to the classic wrist band and a free three-month trial of Fitbit Premium.

Check Price at Walmart Check Price at Verizon
We are reader supported. When you buy through our links we may earn an affiliate commission.

The Special Edition has an extra woven band not included with the standard Versa 2.

Not much has changed in the overall design of the compared to the first one. However, looking at them side by side will show you the big difference the new AMOLED display makes on the Versa 2, which is now bright enough for most outdoor lighting. Moreover, you can set the display to always-on and get an actual wristwatch experience.

Now, between the standard and Special Edition versions of the Versa 2, there’s practically no visual difference. You get to pick from Carbon, Mist Grey, and Copper Rose for the watch body and select from different Classic band colors which include Black, Stone, Petal, Bordeaux, Emerald, and Blossom. However, the Versa 2 Special Edition includes an additional Smoke or Navy & Pink woven band. This special jacquard woven band offers a more relaxed fit than the silicone of the Classic band.

Aside from the extra band, you’re getting the same Versa 2 device whether you go for the standard or special version. It might be worth it to spend the extra bit just to get the option of changing wrist straps on occasion.

Both and Versa 2 Special Edition have the same fitness tracking features.

If you’re new to the Fitbit Versa series, you should know that it’s a fitness tracker first and foremost, with just enough smartwatch features to enhance UI experience. It’s designed to be worn at all times too, not just during workouts. While it tracks heart rate, steps taken, calories burned, etc., you also get sleep quality and female health tracking. Both the Versa 2 and the Versa 2 Special Edition have the same activity tracking features.

There are 15+ goal-based exercises that you can choose from, including running, cycling, swimming, and even yoga. Hitting goals triggers an alert to notify you of your success, and you can check your pace at any point during the workout. The Versa 2’s workout screen can be customized so you can choose which metrics gets displayed.

Without built-in GPS, runners will have to take their connected phones to look at route info and track distance. Of course, perhaps the best reason to get a Fitbit is its app. It shows a detailed breakdown of your exercise metrics while being easy to understand, especially compared to the UI of Apple and Samsung’s fitness apps. 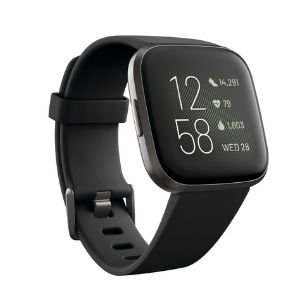 Check Price at Walmart Check Price at Verizon
We are reader supported. When you buy through our links we may earn an affiliate commission.

Both and Versa 2 Special Edition have built-in Alexa and NFC.

A big addition to the is Amazon Alexa, though it’s not a fully-featured version as the Versa 2 doesn’t have speakers. You can ask questions as normal but you’ll have to read Alexa’s responses on the screen. You’ll be able to set up alarms and timers, control smart home devices, and respond to texts with a voice reply.

Unlike the original Versa which only included NFC with its Special Edition, both standard and special editions will allow you to make contactless payments. You can stream Spotify while connected to your phone, but Pandora and Deezer lets you store music on the device itself with a premium subscription. Like most smartwatches you can receive notifications on calls, texts, and calendar alerts on the while it’s synced with your phone.

The Special Edition includes a free trial to Fitbit Premium.

One of the clear best reasons to get a instead of other smartwatches is battery life. Both versions have enough battery capacity to last 6 days of continued use, making recharging a weekly thing instead of daily. That alone already makes it a worthwhile substitute to a traditional wristwatch. With the always-on display this gets reduced to around two full days, but that’s still plenty compared to its competitors.

Back to the comparison between standard and special Versa 2 editions, the latter comes with a free 3-month trial for Fitbit Premium, which normally costs $10 a month. The subscription service adds a lot of extra value to the fitness tracker, such as enhanced activity and sleep data with guides on improving sleep quality as well as workout and nutrition programs. Fitbit is also developing a personalized coaching tool set to launch this year that can help users with weight loss and health conditions.

Get the Special Edition only if you’re interested in trying out Fitbit Premium.

Looking at their price tags, choosing the Fitbit Versa 2 Special Edition is essentially the same as paying for the standard version plus three months of Fitbit Premium. You just get the extra jacquard woven band as a nice bonus. Granted, you can only get these special bands this way but you can shop for different designs later on anyway. With Fitbit Premium you can dig deeper into your fitness metrics and hone your workouts and sleep cycles to help you reach your goals.

As such, if you’re not interested in another subscription service, the standard Fitbit Versa 2 is all you need. It has the exact same activity tracking and smartwatch features and you’ll find that the Classic band is more than sufficient to feel comfortable being on your wrist all day.

📌 What is the difference between and Special Edition?

Currently, the only differences between the standard and Special Edition smartwatches is the additional woven band you get with the latter, as well as a 3-month free trial for Fitbit Premium.

📌 How can you tell the difference between a Versa and a Versa 2?

The Fitbit Versa is boxier and has a sharp edge to its bezel while the Versa 2 has a smoothly rounded screen all the way to its case. Their displays are also different, as the Versa 2’s AMOLED screen will be brighter and sharper than the Versa’s LCD.

📌 Is the Special Edition waterproof?

Yes, the Special Edition (as well as the standard edition) is water-resistant up to 50 meters and can be used to track indoor swimming laps.

The only comes with connected GPS, which means it needs to sync with your smartphone’s GPS for accurate outdoor tracking.