Ever since the first wearables were introduced, there’s been a boom of innovation in the field. Now, smartwatches function almost like mini-smartphones by themselves. The sheer number of choices on the market may make you ask what the difference is between “smartwatches” and “trackers” (and, mind you, there really are differences).

In this comparison, we’ll take a look at how these two categories really differ, and which one suits your lifestyle better. We’ll take models from Fitbit, one of the most well-known wearables manufacturers, specifically the Fitbit Sense and the Fitbit Charge 4. Read on to find out more about the differences in design, features, and other comparisons you might otherwise miss.

Taking a glimpse at how the two designs actually differ.

Despite both being wearables, there is a difference between smartwatches and fitness trackers. They both can tell the time, for sure, and they both help you track your daily physical activities (among others), but they’re obviously designed for different purposes. Fitness trackers are more focused on helping you keep track of your health and activity instead of notifications from your connected phone. This is why they generally have smaller screens: the Charge 4’s screen, for example, is less than an inch wide. You can get notifications in the purest sense of the word; reading those new messages is unwieldy on these. Smartwatches like the Sense are more comparable to wearable mini-smartphones, so they usually have more features (as we’ll see later). Prices do tend to be lower for trackers, though.

As the newest iteration of the Charge, the Charge 4 has introduced a few improvements to the previous model’s design. In terms of design, the Charge 3’s physical button has been replaced with a sleeker haptic button that relies on pressure sensitivity. The Charge 4’s design was made to be lightweight and low-key, coming in at only 30 grams. On the other hand, the Sense has a relatively bigger screen that’s well suited to showing text messages, maps, or whatever you’re currently listening to.

Fitbit offers everything you’ll need on both models (and more, if you get a Sense).

The Sense is remarkable in terms of its sensors (presumably the reason Fitbit named it the Sense). It has all the basics: a heart rate monitor, GPS, and sleep tracking, among others. Most notably, though, it has its signature “biosensor core” which justifies the “advanced health smartwatch” moniker that Fitbit has dubbed it. This core, which is waterproof and cased behind the watch’s screen, has three sensors. First is its battery charging, which is right in the middle of the sensor hub. Next up is the heart rate tracker, which is fully compatible with Fitbit’s ECG measurement app. Third and last is its electrodermal activity (EDA) sensor, the most impressive feature the Sense has, which collects the wearer’s skin temperature. The latter two give the Sense its ability to track its wearer’s stress levels, rating them from 1 to 100 depending on the collected heart rate, skin temperature, sleep quality, and all the other health data available.

As a tracker, the Charge 4 is comparably more bare-bones than its smartwatch sibling. It still has everything you’d want from a tracker, though: an accelerometer, a barometer, a heart rate monitor, and a blood oxygen level monitor. Most notably, it also now has a built-in GPS sensor, which the Charge 3 did not have. Like the Sense, it can also track your sleep patterns and give you reports, and also track distances and how many calories you’ve burned over the course of an activity. 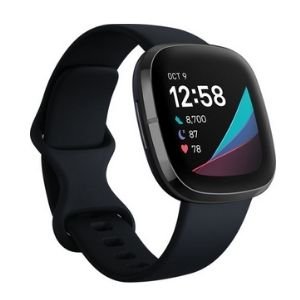 Equipped with new advanced EKG and EDA sensors that can track your heart rate and skin temperature, the Fitbit Sense is indeed an "advanced health smartwatch." Available in Carbon/Graphite and White/Gold models.

The two watches are chock-full of features that work towards more convenient use.

Fitbit has equipped both the yet-to-be-released Sense and its simpler tracker counterpart the Charge 4 with a a lot of useful capabilities. For one, both models are NFC-enabled. This means that you can pay establishments with a tap-to-pay option using either wearable. Another feature that both Fitbits have is that it can operate Spotify, though neither support Spotify offline, and the Charge 4 requires that you have your phone nearby. This means that using Spotify with your Fitbit might take up a huge chunk of your mobile data plan, barring any software updates that may improve efficiency.

Aside from these, both Fitbit models still have more to offer. One noteworthy feature is “Active Zone Minutes”. This capability means that your wearable will buzz whenever you hit a certain heart rate that you’ve set as a threshold, notifying you that you’re currently hitting your goal. Another feature is that it’s waterproof, making it ideal for swimmers. The Charge 4 is even able to recognize what kind of stroke you’re working on. Though it’s not specified that the Sense can do the same, you can safely assume that it will when looking at older Fitbit smartwatches.

GPS capabilities for both the Sense and the Charge 4 aren’t battery friendly.

Both Fitbits have respectable battery life spans on paper. The Sense claims a battery life of 6 days, while the Charge 4 can last up to a day longer than that. However, both wearables are vulnerable due to their GPS sensor. Fitbit has explicitly stated that the battery life for the Sense shrinks to only up to 12 hours of use if the GPS is left on, while the Charge 4’s GPS-enabled battery life is even shorter at 5 hours maximum. This could be a problem if your planned use requires a lot of location tracking (for example, running or cycling). If GPS use is a deal breaker for you, it might be worth checking out other watches (like the Garmin Fenix 6, for one).

Since they’re both Fitbit products, both the Charge 4 and the Sense benefit from the Fitbit app. The Charge 4’s app is notably lightweight: for iOS, at least, it only takes up 14MB of space. Both are also Bluetooth-enabled, though the Charge 4 runs on the slightly older Bluetooth 4 instead of Sense’s 5.

The is great for those who are looking for a basic tracker.

Equipped with new advanced EKG and EDA sensors that can track your heart rate and skin temperature, the Fitbit Sense is indeed an "advanced health smartwatch." Available in Carbon/Graphite and White/Gold models.

If you’re looking for a health tracker and don’t really mind a small screen, the Fitbit Charge 4 is perfect for you. It does still tell the time and receive message notifications. It also has all of the basics you’ll need from a health tracker, combined with access to Fitbit’s latest health technology. It doesn’t hurt that it’s substantially more affordable than its smartwatch counterpart: it’s listed at around half the price of the Sense. For those looking for a helper with tracking your activities that won’t break the bank, get a Charge 4.

We don’t have user reviews yet since we’re a month from its release now, but the Fitbit Sense still looks like a great choice for those looking to buy a new smartwatch with Fitbit’s signature focus on health. Its biosensor core is a huge innovation, especially its EDA skin temperature sensor and stress tracking capabilities. If you have a bit more space in your budget for a wearable, it’s worth it to shell out the extra cash and pre-order a Fitbit Sense now.

Yes: aside from the fact that it’s relatively affordable for a wearable, all the Fitbit features it has makes the Fitbit Charge 4 a great purchase.

📌 Can the play music?

Not by itself, but if you have your phone nearby, you can use the to control your Spotify.

📌 Can Fitbit play music without phone?

The can’t, but the Fitbit Sense can play music and podcasts from Deezer and Pandora.

The can’t answer calls, but you will get notifications on it if ever someone calls you while your phone is in range. Android owners can also use their Charge 4 to send quick replies.

RELATED  Withings ScanWatch vs Fitbit Sense (2022): Which Is A Better Health Smartwatch?