If you just need a fitness tracker without all the bells and whistles of today’s feature-packed smartwatches, then Fitbit is still the best way to go. The brand’s Inspire series, for instance, are easy-to-use fitness trackers that still come with some basic smart notifications. And Fitbit continues to build on this no-nonsense approach to fitness tracking with the release of Fitbit Inspire 2.

The Fitbit Charge 4, which is the latest iteration in Fitbit’s Charge lineup, follows much of the same route as the Inspire devices while including more advanced fitness features. But are these inclusions worth the extra dollars you’ll spend on the Charge 4 compared to the Inspire 2? Below, we take a look at what the latest fitness trackers from Fitbit have to offer and see which is the better deal.

Fitbit’s Inspire 2 and Charge 4 are durable, water-proof fitness trackers that come in a slim form factor.

The Fitbit Inspire 2 and Charge 4 are essentially wristbands with oversized, rectangular displays typical of Fitbit’s fitness trackers. It’s an instantly recognizable design element that distinguishes these devices from other smartwatches from Garmin, Samsung, Apple, and even Fitbit’s own Versa series. The result is a slim and lightweight tracker that also offers a unique watch face layout.

The Inspire 2’s display, however, comes with more rounded edges as opposed to the Charge 4’s more angular form. Nonetheless, the technology behind their screens is the same. You get backlit OLED displays that are readable even under direct sunlight, and which should be highly responsive to swiping and scrolling. On the Charge 4, the display is even protected by Corning Gorilla Glass.

Fitbit shares that the Charge 4 also comes in a durable plastic resin case, with a band that’s made of comfortable polyester. The Inspire 2, on the other hand, uses silicone bands typical of most sports watches and is capable of handling sweat, rain, and splashes. Speaking of splashes, both fitness trackers are waterproof up to 50 meters.

Unlike many of today’s smartwatches however, Fitbit offers the Inspire 2 and Charge 4 only in one size. This shouldn’t be too much of a problem as both products do come with small and large wristband options out-of-the-box. Plus, if you’re unhappy with the included bands, you can always replace them with any of the available stylish accessories that are sold separately. 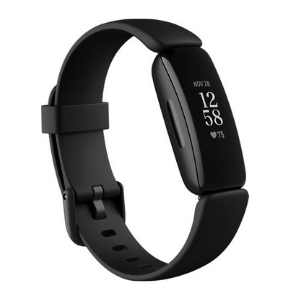 The Fitbit Inspire 2 is the first in the Inspire line to include the Active Zone Minutes feature.

Unlike the Inspire 2, the Charge 4 comes with a built-in GPS and altimeter that adds to the fitness and activity metrics it can track.

At the core of these devices is fitness tracking. Here, the Fitbit Inspire 2 and Charge 4 share many of the same features. Both trackers, for instance, come with over 20+ pre-loaded exercise modes including biking, running, swimming, and aerobic workouts. The devices are also equipped with Fitbit’s SmartTrack technology that automatically detects and records your exercises.

Of course, you will get your daily metrics—calories burned, steps, pace and distance. Reminders to move throughout the day is also standard with the Inspire 2 and Charge 4. But Fitbit has also introduced a new insight called Active Zone Minutes to both devices. The feature essentially monitors your workout and notifies you if you’ve reached personalized heart rate targets.

The Charge 4 does offer more thanks to its built-in altimeter and GPS—sensors that are missing on the Inspire 2. With the altimeter, the Charge 4 allows you to track floors climbed whether you’re actually climbing a flight of stairs or walking up an incline. The built-in GPS, on the other hand, means you get real-time pace and distance even with your phone at home, making outdoor activities like a brisk walk or quick run less cumbersome.

The adds a few extra health monitoring features to those found on the Inspire 2.

The Inspire 2 and Charge 4 are equipped with what are becoming standard health monitoring features across the latest Fitbit devices: heart rate monitoring, cardio fitness level, sleep tracking, guided breathing sessions, and female health tracking. The 24/7 heart rate monitoring, for instance, uses an optical heart rate sensor to track your heart rate throughout a day. It’s a technology that has been proven useful in optimizing workouts and better understanding how you rest.

Data from the same heart sensor also informs the guided breathing sessions and sleep tracking features of these devices. With the former, you’ll be notified to take a breather based on your heart rate, giving you moments of calm. On the other hand, the heart rate monitor allows the Inspire 2 and Charge 4 to track your sleep stages more accurately.

With the Charge 4, however, you also get Smart Wake that uses information about your sleeping patterns to optimize your alarm for the right time. Moreover, an SpO2 sensor is on board to monitor variations in the your blood oxygen levels during sleep.

Fitbit’s Inspire 2 and Charge 4 come with some basic smartwatch features as well as impressive battery life.

The Fitbit Inspire 2 and Charge 4 are fitness trackers, not smartwatches. But that doesn’t mean they don’t come with smart features. For starters, you do get call, text, and app notifications on both devices. You can even reject a call via text or send quick replies, although this is limited to Android users. Just keep in mind that these features are available only if your smartphone is nearby.

Now, the Charge 4 does have a little more up its sleeve like built-in support for Spotify as well as the presence of Fitbit Pay. But other than that, the smart features on these fitness trackers are pretty lean. If you want to take calls, read emails, and customize watch faces, you’ll probably be better off with Fitbit’s more advanced wearables.

Of course, this basics-only approach of the Inspire 2 and Charge does have its benefits. For instance, you get longer battery life compared to Fitbit’s more feature-packed smartwatches. The Charge 4 currently boasts up to 7 days battery life while the GPS-less Inspire 2 should give you an impressive 10 days of use between charges.

The Fitbit Inspire 2 is a great entry-level fitness tracker. On the other hand, the should be great if you need built-in GPS and a contactless payment solution.

The Fitbit Inspire 2 is the first in the Inspire line to include the Active Zone Minutes feature.

If you’re not fond of having every imaginable technology slapped on your wrist and just want a reliable fitness tracker, then the simplicity of the Inspire 2 and Charge 4 might be for you. But which one should you get? Well, it really depends on how much you value the Charge 4’s additional features over the Inspire 2.

Indeed, if you put a premium on convenience, then opt for the Charge 4. The device comes with built-in GPS, Fitbit Pay, as well as Spotify support. In addition, you get to enjoy the benefits of a more advanced sleep tracking system, which includes optimized wake up alarms. Overall, it’s a fitness tracker that makes you a little more independent from your smartphone and offers some extra fitness and health metrics.

However, if you can live without these features, then the Inspire 2 isn’t a bad choice. Except for a few extra fitness and health tracking tools, you’ll basically get the same benefits as the Charge 4 anyway. Plus, the Inspire 2 does come with a few extra days of battery life. And for some people, less time spent worrying if your watch will last a week is convincing enough.

📌 What’s the difference between the Fitbit Inspire 2 and Charge 4?

The Fitbit Inspire 2 and Charge 4 are part of Fitbit’s family of fitness trackers. The Charge 4, however, offers more advanced features including built-in GPS, an altimeter, Spotify support, and Fitbit pay.

📌 How many colors does the Fitbit Inspire 2 come in?

You can get the Fitbit Inspire 2 in three colors: Black, Lunar White, and Desert Rose.

📌 What are the color choices for ?

The Fitbit Charge 4 comes in Black, Rosewood, and Storm Blue/Black. In addition, you can get a special edition Charge 4 that uses a Granite Reflective Woven band.

📌 Is the Charge 4 compatible with an iPhone?

Your Charge 4 can be synced and connected with iPhone 5S and later.

RELATED  Fitbit Sense vs Galaxy Watch 3 (2021): Which New Wearable Should You Get?