The Fitbit Charge 4 and Charge 2 were released almost five years apart by the wearables giant. Fitbit’s flagship fitness tracker is now equipped with a built-in GPS, a much sought-after feature by many users. But is it worth upgrading to the new Charge 4? Our thorough comparison of their features will help you make the call.

Consistent with the aesthetics of Fitbit’s fitness tracker line ups, the and the Charge 2 sport a slim profile with a rectangular watch face. While both are lightweight, the new Charge 4 is lighter and feels more premium than the Charge 2, thanks to its aluminum frame. Their bands are also slightly different, as the ones compatible with the Charge 4 are thinner and follow the natural angle of the wrist better. If you own bands for the Charge 2, they won’t work with the Charge 4 should you upgrade.

The Charge 4 is also slightly slimmer than the Charge 2, but it boasts 40 percent more display size than the 2016 fitness tracker. This makes it easier to see the screen anytime. Fitbit’s flagship fitness tracker is also equipped with a responsive touchscreen and a touch-capacitive button on the side with haptic feedback. Meanwhile, the Charge 2 only comes with a tap screen and a thicker button on the side that you can use to change screens and modes.

Fitbit has finally included an upgrade that has long been requested by its users: a built-in GPS. This allows the Charge 4 to work as a standalone device so even without your phone, you can track and record steps, distances, pace, and map the intensity of your activities throughout your route.

On the other hand, the Charge 2 still relies on your phone’s GPS to be able to do all the abovementioned. This means if your phone runs out of juice, you won’t be able to track your distance and pace anymore.

The delivers more features than the Charge 2 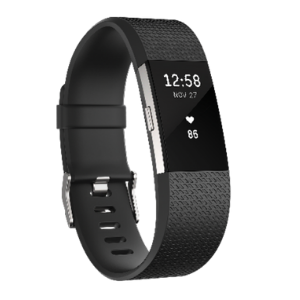 Despite being an older model, the Fitbit Charge 2 still offers essential tracking features for fitness enthusiasts.

The comes with more health and fitness features than the Charge 2. Future software updates also promise more features in the latest Charge fitness tracker. Here are some things only the Charge 4 can do:

One of the latest upgrades found in the is the Active Zone Minutes. This allows you to set your Active Zone Minutes goal and based on your heart rate metrics, receive recommendations to achieve your target steps, distances, exercises, and workouts. It further gives more credit to high-intensity activities to help push you to get your heart rate up.

Both the Charge 4 and the Charge 2 use Bluetooth 4.0 and are compatible with iOS, Android, and Windows

It is a breeze to pair the and the Charge 2 with Bluetooth 4.0. Download the Fitbit app, hold the fitness tracker close to your device, and follow the on-screen instructions when prompted. It is worth noting though that Fitbits cannot be paired with chest strap activity monitors, possibly one of the best ways to get the most accurate heart rate data.

Fitbit made its app and devices compatible with as many platforms as possible. Both the Charge 4 and the Charge 2 can be synced wirelessly with iOS, Android, and Windows 10 and later. If you’re an Android user, you can set-up your fitness tracker to receive alerts and notifications. With the Charge 4, you can use its Quick Replies feature that lets you use preset replies to respond to text messages or calls. Another feature missing in the Charge 2 is the NFC connectivity (more on this in the next section) found in the Charge 4.

Users who don’t like bringing their wallets or phones with them during their runs or workouts will benefit from Fitbit Pay. This is a feature made possible by the Near-Field Communication (NFC) connectivity of the Charge 4. As long as the establishment accepts contactless payment methods such as Apple Pay, Google Pay, and contactless debit cards, you can also use Fitbit Pay to pay for goods and services.

The latest also comes with a Spotify control that lets you manage tracks directly through your fitness tracker. This is probably a minor addition, but can come in handy, especially if your headphones don’t have a user-friendly interface. If you have the Charge 2, you still need to whip out your phone or use your headphones’ playback controls to manage Spotify tracks. However, if you don’t use Spotify to listen to music, this Spotify control upgrade on the Charge 4 won’t be of much use.

If you want to consistently monitor your heart rate even during sleep, a long battery life is necessary. Fitbit designed the Charge 4 and the Charge 2 to be worn for up to 7 and 5 days, respectively. Both only need around two hours of charging time using Fitbit’s proprietary charger. However, it is worth noting that heavy use of the Charge 4’s built-in GPS significantly reduces its battery life.

If you go swimming or surfing a lot, then the Charge 4 is the better fit for you. The latest Fitbit Charge boasts a 5 ATM certification which means the device can be submerged up to a depth of 50 meters. This means you can track and record your sets, pace, distance, and intensity while doing water activities that require submerging your fitness tracker in the water.

On the other hand, the Charge 2 is only splash and sweat resistant. This means it is safe for use for heavy workouts, even under the rain, but should not be submerged. When choosing a Fitbit band to wear for your water activities, keep in mind that the classic and sport bands dry a lot faster than the woven bands (typically come with the Fitbit Charge Special Edition).

The offers greater value for your money than the Charge 2

Considering all the upgrades found in the Fitbit Charge 4, and additional features it can offer with future software updates, the small price difference becomes insignificant. For only a couple of dollars more, you’ll get the following upgrades: waterproof, swim tracking, blood oxygen level sensor, Active Zone Minutes, NFC connectivity for contactless payment, and longer battery life, all with a bigger display and built-in GPS. Not to mention the Charge 4 sports a sleeker design than the older Fitbit Charge 2.

📌 What’s the difference between the and the Charge 2?

The Fitbit Charge 4 is equipped with more sensors and smart features than the Charge 2. To see their differences at a glance, check out our comparison chart above.

Yes, unlike the Charge 2, you can use the for swimming as it’s waterproof up to 50 meters.

📌 Can I wear the in the shower?

Yes, the Charge 4 is waterproof up to 50 meters so it’s safe to use in the shower.

📌 Can I wear the in the shower?

No, wearing the Charge 2 in the shower is not recommended. It’s safe to use during workouts, though.

RELATED  Fitbit Versa 2 vs Amazfit Bip (2021): Which Fitness Smartwatch Should You Get?