With the Fitbit Charge 4 entering the market, going for previous models of popular wearables becomes a more questionable plan. Fitbit adds several key features that seriously upgrades the Charge series, making it a very attractive budget option. However, some smartwatches, such as the Apple Watch Series 3, remain a fantastic choice simply because of how great they are. How do you choose between the two? Check our comparison and recommendations below.

The looks practical while the Apple Watch 3 looks sleek and modern.

You can’t fault either Fitbit or Apple for not straying too far from the success of their original fitness smartwatch designs. Both the and appear to be made from the same mold as their previous iterations, but they’re too well-suited for their intended purposes. But that’s key to the comparison of course.

Where the Charge 4 is slim and narrow and looks like it’s a single band wrapping around your wrist, the Apple Watch 3 has a more traditional watch-like form, except that it has a rounded square display. Fitbit designed the Charge fitness tracker to minimize its impact on your movement, so it’s lightweight and unassuming. Meanwhile, Apple wanted their smartwatch to wow onlookers with its gorgeous display and striking form.

If you like full color, high resolution screens, you’ll love the ‘s larger, brighter display. It comes in two sizes, 38mm and 42mm, and they both make apps look great. In contrast, the ‘s LED remains grayscale, so app interfaces are quite simpler and minimalist to make them easier to navigate and digest.

In short, the Apple Watch 3 clearly has the upper hand in terms of overall looks, but the Charge 3 gets plus points for ease of use and ergonomics.

The offers built-in sleep quality and female health tracking features while the Apple Watch 3 do so via apps.

As the much newer device, the has a wider variety of activity tracking features as well as health focused ones. It’s equipped with a heart rate monitor, pedometer, altimeter, and accelerometer, which are all typical in fitness trackers these days. Some few relatively new functionalities include automatic workout recognition and Active Zone Minutes, which helps you stay more active throughout the day outside of actually working out.

While the sports much the same activity tracking you’d expect, it doesn’t have a dedicated sleep tracking feature which the Charge 4 has. This allows the wearable to record your heart rate while sleeping to offer insights on your sleep quality and how to improve them (available in Fitbit Premium). The Charge 4 also has a better developed female health tracking feature than the Apple Watch 3, so you’re able to follow your cycles and record symptoms. 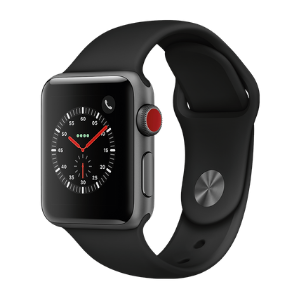 Check Price at Amazon Check Price on Verizon
We are reader supported. When you buy through our links we may earn an affiliate commission.

One previous advantage of the Apple Watch over the Charge devices is that it came with built-in GPS so you can check your real time pace, distance traveled and route taken. That’s not the case anymore with the Charge 4, which now has GPS integrated into the tracker so you can leave your phone while on a run. You’ll still need to use your phone to see a map of the path you took though.

Both are waterproof up to 50 meters, allowing you to wear them during swimming workouts.

The Apple Watch 3 has a deeper app library and better connectivity options than the .

The larger and full color display of the lends well to feature-rich apps with enhanced UIs and diverse capabilities. Furthermore, the number of apps in the App Store that are compatible with the Apple Watch 3 simply dwarf that of the . With a grayscale screen and limited touchscreen controls, the Charge 4 isn’t really built for interactive and pretty apps.

You can download apps directly onto the Apple Watch 3 via Wi-Fi and even store songs in it. Even better, the GPS+Cellular variant featured in this comparison is capable of LTE connections. You can leave your iPhone at home and enjoy the same connectivity as if you had it with you. It also has a mic and speaker that lets you speak with Siri, as well as NFC to enable contactless payments with Apple Pay.

Meanwhile, the is limited to Bluetooth and NFC, which at least lets you use Fitbit Pay with a non-Special Edition. While you can use GPS without bringing your phone, you’ll still have to sync with it when you get back so all of your fitness metrics get saved into the Fitbit app. You do get to control Spotify, Pandora and Deezer with it, so you won’t have to pull out your phone, but you can’t store any songs on the tracker itself.

The lasts much longer on a single charge than the Apple Watch 3.

With its high-end display and CPU-intensive apps, the eats up battery charge a lot quicker. A single full charge only lasts up to 18 hours, which gets reduced even more if you turn on GPS and other features. You’re likely going to need to charge it every night, but it’s at least easy with the included magnetic charging cable. This is likely the reason Apple chose not to include sleep tracking in its list of promoted features.

Now, if you want a wearable you won’t need to take off except on occasion, the won’t disappoint. Its battery life is measured in days, not hours, so you can wear it all day and night to track both your exercises and sleep. The 7-day battery life of the Charge 4 will get slashed down to 5 hours if you keep GPS turned on though, so you’ll want to be prepared when relying on it for outdoor excursions.

In terms of controls, you’ll find the to be better to navigate thanks to its Digital Crown, a small knob at the side of the device. This lets you scroll through the screen and clickable items without blocking the screen with your finger. In comparison, the has a single button to turn the display on and you’re limited to simple swipes and taps.

The Apple Watch 3 is a more flexible smartwatch while the is a highly focused fitness tracker.

With extensive smartwatch and activity tracking features, it’s easier to recommend the Apple Watch Series 3 (GPS+Cellular) to the majority of users who want a versatile wearable. With it, you can both track your exercises and calorie burn, and utilize its bevy of apps to enrich your non-fitness related activities. It has all of the connectivity options you could ask for and you’re likely going to enjoy its crisp, bright display so much that you’re going to check the time on it much more than on your phone.

Now if you’re really after a device that can help push you to reach your fitness goals, the highly focused design of the Fitbit Charge 4 will be much, much better. It’s got an immense reserve of battery life to draw from so you’d barely need to take it off your wrist, which means you can track health and workout metrics all the time. You can take advantage of its built-in GPS and NFC now, and you also get a free 3-month trial for Fitbit Premium to get you started on the right foot.

📌 Which is more accurate, Fitbit or the Apple Watch?

While their accuracy is comparable, Apple Watches are typically more accurate than Fitbit fitness trackers and smartwatches.

📌 Does an Apple Watch count steps like Fitbit trackers do?

Yes, an Apple Watch can track your steps, heart rate, and calorie burn, among many other metrics.

📌 Is Fitbit owned by Apple?

No, Fitbit was recently acquired by Google.

📌 Which has a better battery life, the or the Apple Watch 3?

RELATED  Fitbit Versa 3 vs Apple Watch 4 (2021): Which Fitness Smartwatch Should You Get?