Smart displays are fairly recent innovations that add another dimension to voice assistants and smart home devices. After the success of one of the most popular smart home screens ever, the Echo Show (2nd Gen), Amazon decided to offer it in different sizes, resulting in the Echo Show 8 and 5. Here’s a look at the key features of the (so it’s easier to differentiate) and to help you decide which device to get. 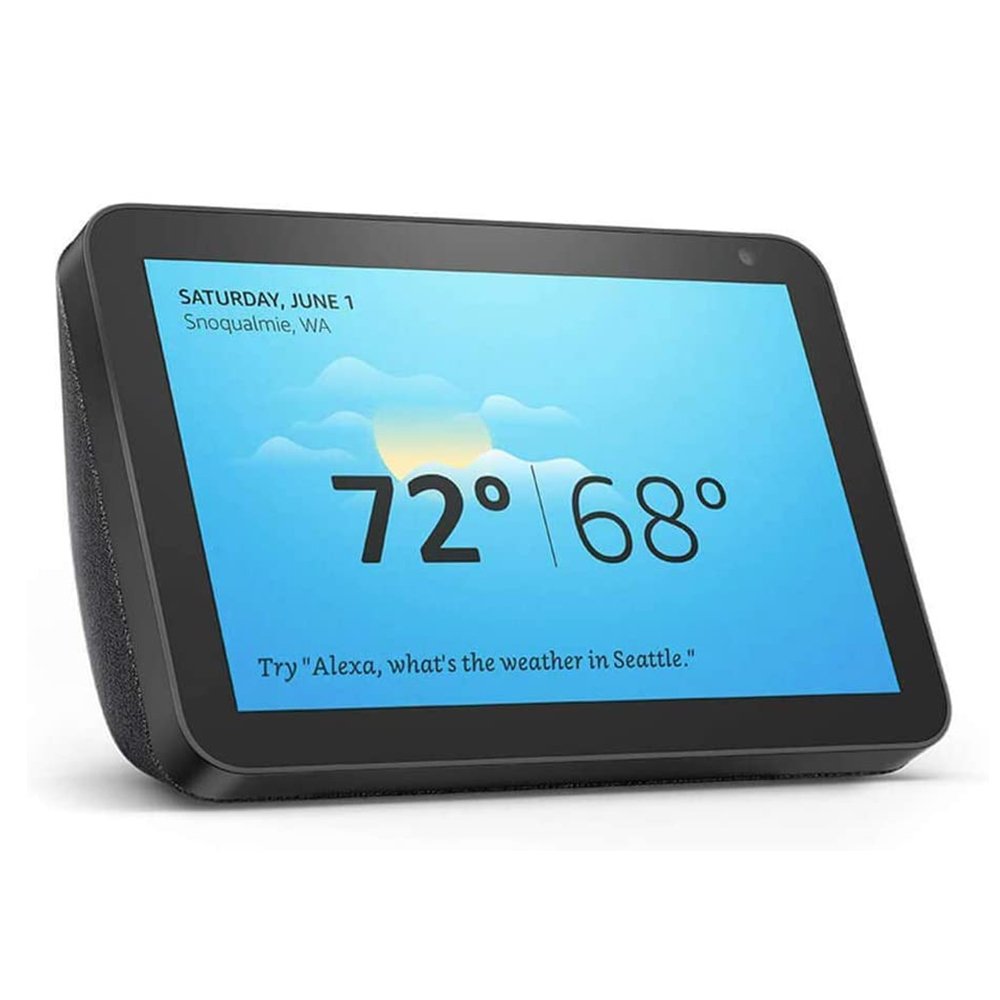 Control your voice-enabled devices and manage your to-do lists better with the easy-to-use display on the Echo Show 8. With its built-in Amazon Alexa, you can video call friends and family with a simple voice command.

The has a larger screen and heavier build than the .

If you think bigger screens are better, you’ll clearly love the 10.1″ screen of the Echo Show (2nd Gen). The larger touch display makes it easier to see from a distance, especially when you’re reading on it. If you have a lot of counter space or just want one smart home screen at home, it would make sense to get the largest you can get. That does mean contending with the ‘s weight and bulk but it shouldn’t be a problem once you’ve found a great spot for it.

Amazon aimed to make their Echo Show more accessible to different homes by offering smaller displays. The is noticeably more compact, being half the weight of the 2nd Gen Echo Show. With its sized down frame it fits more easily into busy countertops and crowded bedside tables. It’s pretty similar overall to its larger brother, with a high res screen slightly tilted for easy viewing.

Both devices have their backs covered in grill cloth for their speakers. The has a more rounded shape that looks friendlier viewed from behind, though you’ll probably be looking at it from the front most of the time. A power port and 3.5 mm audio output are located at its base, while mics are placed along the top edge of the display.

One of the best design additions that Amazon made with the is its physical shutter for the front-facing camera. You’ll be able to see the cover going over the camera hole so you can be confident that it’s closed. It still has a mic/camera button you can use to turn those off for privacy reasons, which is the only thing the has, but it’s a nice security option nonetheless.

The has better sound quality than the .

We’ve already mentioned the display size advantage of the Echo Show 2nd Gen, making it much better for watching movies and TV shows. However, the does have the same resolution of 1280 x 800 so you get the same video quality on it too. Moreover, with its smaller screen its details will look crisper if you look closely. Amazon also added progressive scanning to the , which results in fewer visual artifacts for even better clarity. 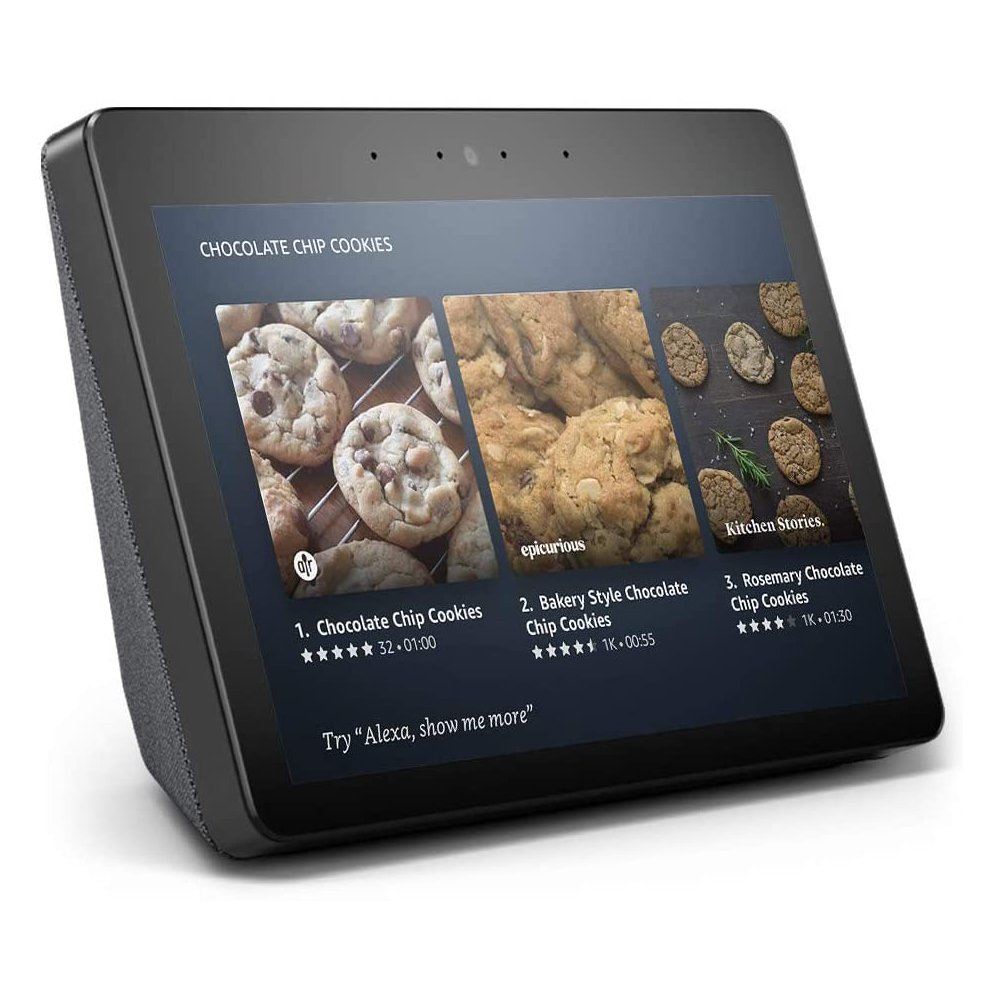 So while there are tradeoffs between the two in terms of visuals, there’s a more noticeable divide in their audio performance. The has larger 2.2-inch speakers which allow it to stay clear at higher volumes. In comparison, you notice a little buzz with the ‘s 2-inch drivers once you start turning it high. Furthermore, the applies Dolby processing to empower its sound to fill rooms more, a feature that Amazon chose to leave out of the .

Despite the 5 MP and 1 MP camera sensors of the and 8, respectively, actual picture quality is very close. This goes against the common assumption that lower megapixel cameras produce blurrier images which is quite surprising. So despite the apparent edge of the Echo Show 2nd Gen, you get the same overall experience on the during video calls.

Setting up multiple Echo Show devices in the house allows them to function as video intercoms, which might be a pretty attractive option with the smaller . For privacy, you can turn off the camera and mics of the with a single button. You can do the same with the but there’s an additional shutter that you can switch to physically block its camera as well.

The and 8 enable voice control for your smart home devices.

Amazon essentially added a touchscreen to its original Echo devices to create the Echo Show. As such, their primary functionality remains the same: enabling voice control for smart home devices. With built-in Amazon Alexa, you can simply ask it to turn off lights, play music, see who’s at the front door, and look up a recipe, among many other uses. The addition of a display certainly enhances and expands the list of things you can do with an Echo device.

There’s a slight difference in the smart home hub integration of the and 8. Amazon initially used Zigbee smart home hub on the Echo Show 2nd Gen to help it pair faster with other smart products. Now that they’ve developed their new Certified for Humans program, pairing, updating and controlling smart home gadgets with the is just as quick and painless.

The is easier to recommend than the (2nd Gen).

With similar touchscreen resolution, camera performance, and feature sets, we can easily recommend the Echo Show 8 simply because you can get two for the price of one . You get so much value for what you’re spending and you’re only really losing display size. The is big enough for making video calls and watching cooking tutorials, and small enough to easily find a place in your living room, kitchen or bedroom. Plus, you get a much nicer sense of privacy from its cameras shutter, too.

The larger screen of the Echo Show (2nd Gen) makes it a lot better if you want to be able to watch streaming content on it, which is nice outside of the living room. With its improved sound quality you’ll be able to enjoy movies and TV shows a lot more on it than on its smaller siblings. If you have plenty of space or have a lot more room at home, you’ll appreciate how big the is even more.

📌 What is the difference between Echo Show and ?

The Echo Show (2nd Gen) is larger than the , which is so-called for its 8-inch display. Similarly, the Echo Show 2nd Gen is also referred to as due to its 10-inch screen. In addition, the has slightly larger drivers for its speakers than the , so it can play on louder volumes. Finally, the 5MP front camera of the doesn’t have a physical shutter like the 1MP camera of the .

Compared to the Echo Show 5 and 10, we’d recommend the due to its nice balance of features and capabilities between all three. You’ll get a sizable screen that’s big enough for video-calling and streaming content, while it’s sound is acceptably loud for its size.

No, the unfortunately doesn’t support Netflix. It can play videos from Amazon Prime Video, Hulu, and NBC, however.

Though it’s not a native feature, there are ways to watch TV on an Echo Show. You can use Alexa skills from Hulu, Bloomberg, the Food Network, etc., to play live TV shows from those networks. You can also connect the Echo Show to a Fire TV Recast device or use Mozilla Firefox and Amazon Silk web browsers.

From the latest smart home hubs to the most reliable WiFi routers, here at Compare Before Buying we obsess with everything that makes your home smarter.