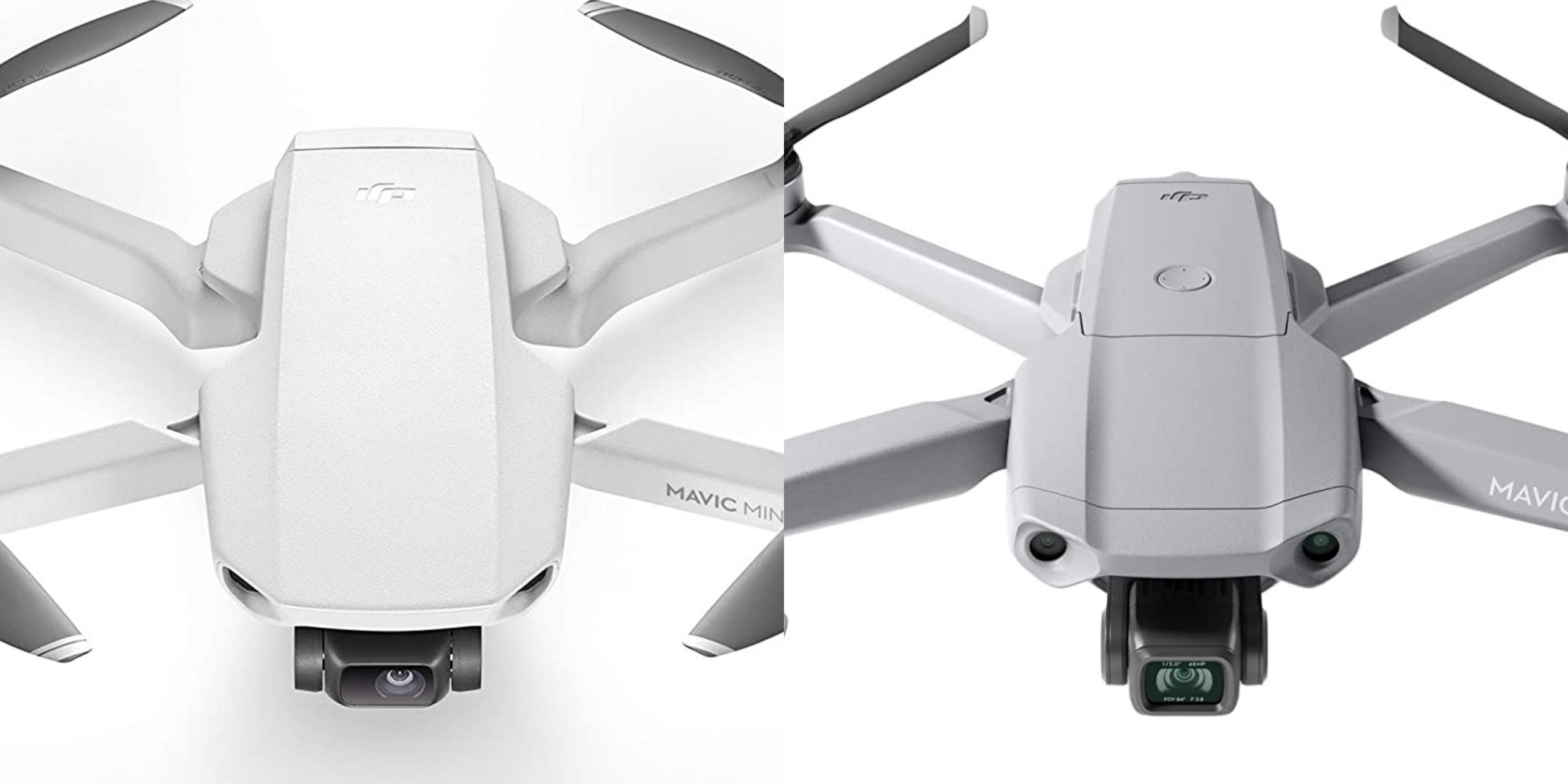 For those who want in on the wonderful world of drones, DJI’s Mavic series is a great entry point. Their drones are packed with fantastic features but aren’t too complicated that they scare beginners away. The DJI Mavic Mini and the DJI Mavic Air 2 are two examples of their starter drones, both of which are perfect for nervous first-time flyers. While you can’t really go wrong with either of them, they do have some crucial differences that buyers should be aware of.

The Mavic Mini, as you can probably already guess from its name, is smaller and built with more basic features, making it perfect for those who simply want to enjoy quality photos and videos. The heftier Mavic Air 2 offers features that are a bit more advanced, allowing users to produce professional content. To help you decide between these two models, here’s an in-depth comparison of their key characteristics.

The Mavic Mini wins in portability but the Mavic Air 2’s bigger size allows it to pack in more features.

True to its name, the Mavic Mini is a tiny little thing. It’s almost the same size as a smartphone and it can fit right in the palm of your hands. In fact, this 0.54-pound device doesn’t even need to be registered with the Federal Aviation Administration (FAA) in the United States given how small it is. Because of its weight, it’s able to stay up in the air longer, something that the heavier flycam brands in the market only wished they could do. What’s amazing is that you can make it even more compact than it already is, thanks to its ingenious foldable design. This way, it can slide right into your pocket along with its foldable remote control. It sports a light grey color all over its body and has sleek lines running along its length, giving it a subtle look.

The Mavic Air 2, weighing in at 1.3 lbs, has double the heft of the Mavic Mini. This means you do need to register it with the government before it can get a taste of the wind and sky.  While it is by no means an enormous gadget, it most certainly lacks the portability of its smaller counterpart. But what it lacks in portability it makes up for in features. You can do a lot more with the Mavic Air 2, given that it has a more capable camera, a longer flight duration, and a better flying range. As for its color, it dons a darker hue of grey, lending it a more rugged feel.

The Mavic Air 2 definitely takes the cake when it comes to camera capabilities. Built with a 1/2-inch CMOS sensor, it’s able to shoot 12MP and 48MP photos in both JPEG and RAW formats. When it comes to videos, it can shoot at an impressive 4k 60 fps at 120 Mbps. HDR photos and videos is an option too, with 4k 30fps being the maximum level of quality. The Mavic Air 2’s camera also comes with a couple of new smart features that make for a better shooting experience. Its Scene Recognition feature allows it to detect sceneries such as blue skies and sunsets and it then optimizes these images to bring out the best details. It also has the Hyperlight feature which comes in handy for night photos. It takes multiple photos and merges them to lessen the grain in low-light images.

The Mavic Mini’s camera may have less settings on it but that isn’t always a bad thing. In fact, some might find its simplicity more appealing. After all, not everyone cares whether or not a camera can shoot RAW or if it has additional smart features. If you’re just in it for great photos and videos that you can look back on, the Mavic Mini will be more than enough for you. For photos, it shoots at 12MP while it records videos at 2.7k 30fps at 40 Mbps.

The Mavic Air 2 outshines the Mavic Mini when it comes to flight time and range.

The Mavic Air 2 impresses yet again when it comes to performance. It has the longest flight time out of any of the Mavic models, clocking in at 34 minutes. It has its 3500 mAh battery to thank for this amazing ability. Not only that but its maximum control range is unparalleled in the Mavic world as well, setting the bar high at 10,000 meters. As for speed, it can go as fast as 4.25 mph when it’s in sports mode. To boot, it knows how to keep itself safe during its speedy flights with its obstacle sensing capability, meaning you can rest easy without fear of your drone crashing into random objects.

When it comes to the Mavic Mini, equipped with a 2400 mAh battery, it falls short of the Mavic Air 2’s flight time by four minutes. But for its petite size, 30 minutes of flying can definitely be considered a powerful feat. The real difference between the two, however, is in their range, with the Mavic Mini falling behind at 4,000 meters. Some might argue, however, that there’s really no need to go beyond that distance anyway. It can’t keep up speed-wise either, with its maximum at 29 mph. Another point against the Mavic Mini is its lack of an obstacle avoidance feature, leaving its fate completely in the hands of the user. It does, however, have sensors at the bottom so it can at least recognize the ground.

The Mavic Air 2’s OcuSync 2.0 proves to be more reliable than the Mavic Mini’s enhanced Wi-Fi.

Equipped with a new transmission system called the OcuSync 2.0, the Mavic Air 2 is able to send 1080p video signal broadcasts to its controller, giving users an interrupted live view of what the camera is seeing. The Mavic Mini lacks this technology and instead uses enhanced Wi-Fi for transmission purposes. This comes with a drawback because there’s a possibility of the signal breaking when it receives interferences from other Wi-Fi devices in the area.

The Mavic Mini is for fun while the Mavic Air 2 is for aspiring professionals.

In the end, what you need to be asking yourself is: “What am I really going to be using it for?”

The DJI Mavic Mini is for you if fun is what you’re looking for. You don’t care much for megapixels.You just want something casual to help you capture the memorable moments of a beach trip, a hike, or a friend’s wedding. If you’re a complete beginner in the realm of photography, this is definitely the better option because you wouldn’t want to shell out double the amount of money for something you wouldn’t be able to fully take advantage of.

As for the DJI Mavic Air 2, it’s for you if you want to take things up a notch. Maybe you’re starting to get a little more serious about photography and would like to pursue it on a professional level some day. This model will definitely give you the settings you need to get on that next level, allowing you to take HD photos and 4k videos. It does come with a much steeper price tag, however, so do mull things over first before making the purchase.