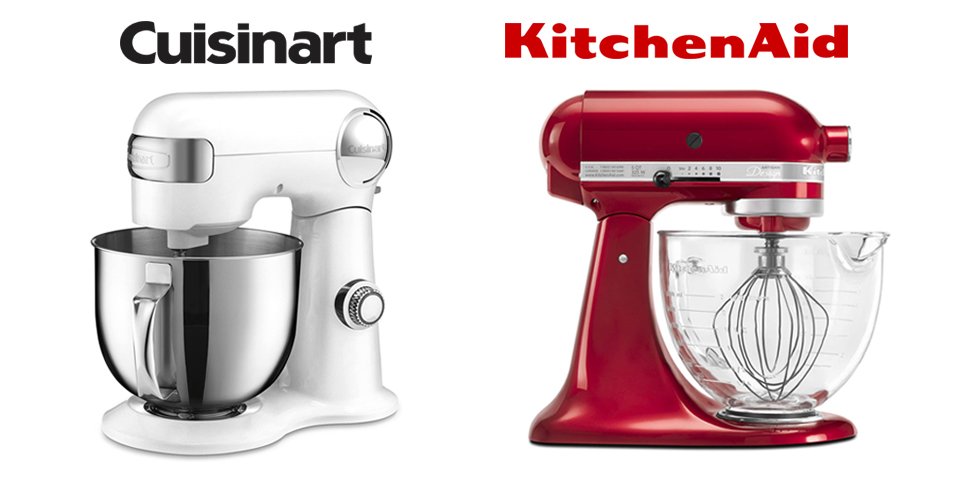 For bakers and baking enthusiasts, perhaps one of the most important pieces of equipment to purchase is a stand mixer. It not only saves you time, but it also saves you energy from mixing batters and kneading dough with your bare hands. It also ensures that whatever you are mixing is mixed well. Unlike hand mixers, a stand mixer gives you the freedom to attend to other things while it does the work for you.

Two popular stand mixer brands are Cuisinart and KitchenAid. Both offer a variety of stand mixers with different capacities and specs. Today, we will be comparing Cuisinart’s 5.5-Quart Precision Master Stand Mixer and KitchenAid’s 5-Quart Artisan Design Series Stand Mixer. Cuisinart is known for making affordable baking tools while KitchenAid, because of its premium innovative products, has become a household name when it comes to baking.

Cuisinart is made of stainless steel, including its bowl, while KitchenAid has a metal stand with a glass bowl.

Cuisinart’s Precision Master Stand Mixer comes in stainless steel and metal. It comes in six available colors, namely Onyx Black, Periwinkle Blue, Robbin’s Egg, Ruby Red, Silver Lining, and White Linen. Its bowl is made of stainless steel. On the other hand, KitchenAid’s Artisan Design Series Stand Mixer has a bowl made of glass. The machine itself is made of metal. It comes in three available colors: Azure Blue, Candy Apple Red, and Sugar Pearl Silver. Cuisinart’s stand mixer is slightly bigger than KitchenAid’s stand mixer, given that it also has a slightly bigger mixing capacity. However, it is lighter at 21 lbs compared to KitchenAid’s 29 lbs.

The Cuisinart Precision Master Stand Mixer has a 5.5-quart mixing capacity. It offers 12 mixing speeds to suit your baking needs. The Cuisinart stand mixer allows you to tilt back the head to easily access whatever you’re mixing. It also has one power outlet where you can attach extra attachments like a pasta roller and cutter, pasta extruder, meat grinder, frozen dessert maker, and spiralizer. Included with the stand mixer are a chef’s whisk, dough hook, and flat mixing paddle.

The KitchenAid Artisan Design Series Stand Mixer has a 5-quart mixing capacity and offers 10 mixing speeds. Like the Cuisinart Stand Mixer, it also has a tilt-back head for easier access when mixing. The stand mixer comes with a coated metal flat beater, a coated metal dough hook, and a wire whip. It also powers over 12 optional accessories like a pasta cutter, pasta roller, food grinder, food processor, spiralizer, sifter, citrus juice strainer, juicer and sauce attachment, and many more available for purchase at Amazon.

Cuisinart performs well for its price while KitchenAid is a better choice for durability.

The Cuisinart Precision Master 5.5-Quart Stand Mixer brags a 4.7/5 star rating on Amazon. Generally, it received high reviews for its affordable price while also being able to get the job done. Most problems, however, occur because the mixing head doesn’t reach the bottom of the bowl. Compared to KitchenAid, Cuisinart features a wider bottom on its bowl. This affects mixing small amounts of ingredients because the ingredients will spread across the wide bottom, thus giving the mixing head difficulty in reaching the ingredients and mixing them well. That being said, you will not encounter this problem if you do not mix very small amounts of ingredients.

The KitchenAid Artisan Design Series 5-Quart Stand Mixer, on the other hand, has a 4.8/5 star rating on Amazon. KitchenAid has been known for its durable quality and has become the most popular brand among stand mixer brands. When it comes to mixing, it is easily able to mix well because of its narrow-bottom bowl. This also requires less scraping compared to using a wider bowl.

Choosing which stand mixer to buy depends on whether you are looking for an affordable one or a durable one.

If you are just learning how to bake or you are looking for an affordable stand mixer, we recommend the Cuisinart Precision Master 5.5-Quart Stand Mixer. It sits at a much lower price point than KitchenAid products but it gets the job done. The Cuisinart stand mixer may not be as fine-tuned as KitchenAid’s stand mixers but it still offers great value for money.

However, if you are looking for a product for professional use or one that will keep mixing for years, the KitchenAid Artisan Design 5-Quart Stand Mixer is the way to go. KitchenAid is known for making great quality products that last for many, many years and this one is no exception.

📌 Do these stand mixers have warranties?

KitchenAid has a one-year full warranty and will pay for a Hassle-Free Replacement of your purchased KitchenAid stand mixer. You can also opt for replacement parts and repair, which will be paid for by KitchenAid.

📌 Is the Cuisinart mixing head adjustable?

No. The mixing head is not meant to reach the bottom of the bowl. This stand mixer works better when mixing a larger quantity of ingredients.

📌 What is the difference between KitchenAid Classic and KitchenAid Artisan?

The KitchenAid Artisan Series has more power and bigger capacity.

Yes. Both products support a variety of extra attachments which are available for separate purchase.