Which cutting machine is the better investment in 2020: the or the ? Both are highly rated brands, so a lot of crafters are debating which machine to add to their craft collection. The Cricut Maker has been in the market since 2017, while the Silhouette Cameo 4 was only released in 2019 and at a more affordable price point than the Cricut. We take a closer look at their features to help you pick your machine in 2020. 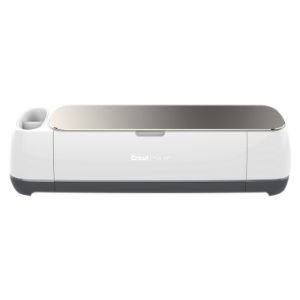 The Cricut Maker is Cricut's most powerful cutting machine to date. Its advanced cutting features paired with an intuitive interface make the Cricut Maker an excellent machine for beginner and experienced crafters alike.

Check Price on Cricut Check Price on Walmart
We are reader supported. When you buy through our links we may earn an affiliate commission.

Both machines are fast, but the Cameo 4 applies 1kg more downward force

The has been faster than the other Silhouette Cameos until the latest Cameo 4. Both cutting machines are already faster and more powerful than the average cutting machines, but with 5 kg downward cutting force, the Cameo 4 is more powerful than the with 4 kg downward force. If you are only cutting card stocks or fabric, you might not even notice their difference. However, if you cut thick materials often such as vinyl, leather and balsa wood, you will appreciate the extra force that the Cameo 4 offers.

The software used by your cutting machine can greatly affect your design and cutting experience. The uses Cricut’s Design Space while the Cameo 4 runs on the Silhouette Studio.

The Silhouette Studio also has a wide selection of fonts and designs to choose from, but it is notable that it offers more flexibility when designing from scratch. If you like having more freedom in designing, the Cameo 4’s Silhouette Studio can offer that more than the ‘s Design Space. 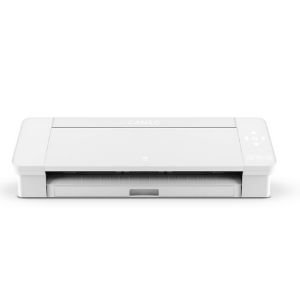 The Silhouette Cameo 4 offers similar features as the Cricut Maker at a lower cost. Apart from its wide range of cutting features, the Cameo 4 is also loved by advanced craft designers for its versatile design software.

Another major difference between their software is ‘s Design Space for desktop only works on the cloud while the Silhouette Studio is downloadable. If you always have a stable internet connection at home, then the cloud-based Design Space will work well. If you are using iOS though, you’re in luck as they have rolled out an offline version.

For those with a poorer connection at home who use desktop computers, the Silhouette Studio is the better choice. However, since the Cameo 4 is still fairly new, users have experienced more bugs than the Design Space, which has been on the market for much longer.

The is compatible with more tools than the Cameo 4

For years, the was the only cutting machine equipped with a rotary blade. The Cameo 4 changed that though as this latest cutting machine comes with AutoBlade. However, even with the Cameo 4’s vast upgrades from its predecessor, the still currently has more tools you can use by a mile (see comparison chart).

The is smaller, looks sleeker, and has more colors

The overall look of the Cameo 4 pales in comparison to the . The ‘s aesthetics and chic shades are on point. You can choose from blue, lilac, champagne, mint, white, and rose. As for the Cameo 4, white, black, and pink are the only options.

For crafters who want to maximize space, you will also like the smaller dimensions of the . The also has an iPad docking station that helps save space.

The gives you more bang for your buck, but new crafters will benefit from the ‘s wide variety of tools and user-friendly interface

This is a difficult decision because each has its own unique strengths.

At a lower price point, the Silhouette Cameo 4 offers significant features similar to what the Cricut Maker has. Even when you are not looking at the price tag, its power and the bigger cutting size options that Silhouette is about to roll out this 2020 make it a better investment. The Silhouette Studio of the Cameo 4 is something advanced designers also prefer because it provides more freedom to customize your designs.

On the other hand, the Cricut Maker is easier to set up, its software is more intuitive, and has more compatible tools available. For those who like to sew and do 3D projects, the has a vast selection of sewing patterns and projects to choose from. In addition, since it has also been in the market for a while, you will find more tutorials available online that will help you maximize its features, and any bugs it had when it was first released have been fixed. The same cannot be said for the fairly-new Silhouette Cameo 4.

It depends on what you’re looking for. The is compatible with more tools, and its accompanying software Design Space has more fonts, images, designs, and sewing patterns. It has just about anything you need for intricate projects. Meanwhile, the has a higher cutting power of 5,000 grams than the ’s 4,000 grams. That means it can cut thicker materials with ease.

Yes. The Silhouette Cameo 4 is worth getting if you’re planning on working with thick materials such as leather and balsa wood often. That’s thanks to its high cutting force.

Yes. After all, the Cricut Maker has been longer in the market. That said, there are plenty of tutorials available to help you get started on small cutting jobs and work your way up toward bigger, more complicated projects.

and its Design Space are more intuitive and user-friendly, making it the easier machine to use. On the other hand, the and its Silhouette Studio have a steeper learning curve but offer more flexibility.

From the latest Cricut cutting machines to the handiest heat presses, here at Compare Before Buying we geek out on everything to do with arts and crafts.