Bose and Harman Kardon are pedigreed heavyweights in the audio industry, both with long histories of outstanding products. Their forays into Bluetooth technology continue to provide fans with great options. See how their latest compact speakers stack up against each other, with the Bose SoundLink Revolve on one corner and the Harman Kardon Onyx Studio 5 on the other. 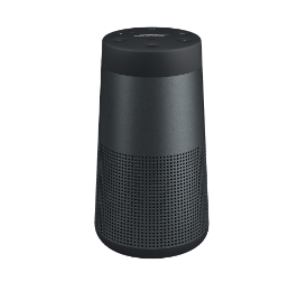 The is much lighter and more portable than the .

It’s actually a stretch to call the a portable Bluetooth speaker. At around four times the weight of the , you’re not likely going to want to bring it along on trips too often. The addition of the aluminum handle is a nice touch and is definitely an improvement over the previous model. However, its bulk and weight means it’s more suited sitting on a coffee table at home.

And yes, it’s going to look good on there, too. The Onyx Studio 5 is draped in an elegant fabric material that gives it a pleasing texture both to look at and touch. It definitely looks like a premium product even though it’s much more affordable than the , which is no slouch either in the looks department.

One more detail that really cements the SoundLink Revolve’s edge in design and portability is its IPX4 rating. It can survive getting splashed on long enough for you to get it under cover. It’s not fully waterproof though, so you’ll have to take care not to actually drop it into a pool. Still, it’s a big plus if you want a portable speaker to bring outdoors. It even has a threaded universal mount underneath if you want to secure it onto a tripod.

The has a mic and extra mobile app controls while the doesn’t.

While both Bluetooth speakers have sets of buttons at the top, there’s an extra multi-function button on the . Pressing it lets you access Siri or Google Assistant, or answer phone calls. The mic right beside it enables speakerphone functionality, and it can hear you over music. While it’s not a true smart speaker, it does make the SoundLink Revolve a bit better equipped for tech-friendly households. 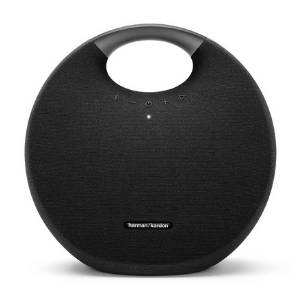 Meanwhile, the control buttons on the are lined up along the top front of the device, and they’re nicely raised up. A tiny light indicates power and that’s pretty much it. It’s very minimalist, so guests visiting your home might be surprised to find out they were looking at a speaker and not a fancy ornament when they come close.

The other aspect where the out-features the is in the mobile app department. Connecting the Revolve to your phone’s Bose Music app allows easier switching between Bluetooth devices and also lets you set up Stereo or Party Mode. You can pair several SoundLink Revolve devices and get actual stereo sound. Meanwhile, not only does the Onyx Studio 5 not have mobile app controls, you can only pair it with another Onyx Studio 5 and it won’t even result in stereo output. It will only sync them to play together.

The is louder and packs more bass, but the has better overall audio.

Between the two of them, there’s no doubt that the is the more bass-heavy speaker. At low volumes, you can easily make out the boost on the bass while its midrange and high-ends remain clear and flat. Turning it up reduces the bass slightly, though it still ends up being a bit overbearing for certain music genres. Those who love modern tunes such as pop, hip-hop, dance music, etc., will love its powerful booming sound, but for music with more instrumentation, it might leave you wanting.

The difference in power lies in the Onyx Studio 5’s woofer and tweeter combo, which simply outmuscles the single full-range transducer of the . However, what it lacks in raw power, it more than makes up for in overall depth and clarity. You’ll be able to clearly pick out distinct instruments and voices, and there’s a rich crispness to tones even at higher volumes. Its low-end is respectable too, especially for its tiny size, and it does a thorough job of filling a room with sound with its omnidirectional design.

It would hardly be fair to compare the ‘s stereo sound when paired with another SoundLink speaker, since the Onyx Studio 5 remains in mono. Most will only buy a single Bluetooth speaker at any given time, but it’s good to remember this as an option if you think you might want stereo sound in the future.

The has a longer battery life than the Bose Revolve.

For its size, it’s a bit disappointing that the doesn’t have a proportionally sized battery in it. At around 40-50% volume it can last its listed battery life of 8 hours, while it only lasts half that at full volume. In contrast, the gets around 12 hours of playtime in a single charge, sometimes longer on less intensive tracks.

The SoundLink Revolve also charges to full much quicker, at around 3-4 hours compared to the Onyx Studio 5’s 5 hours. This might not matter much if you’re primarily using either speaker indoors where you can simply leave them plugged in. However, if you’re planning to take the speaker off its cable, you’ll find the better overall battery of the Bose model a big plus.

The + is our recommendation for those who want a portable Bluetooth speaker.

Check Price at Walmart Check Price at Amazon
We are reader supported. When you buy through our links we may earn an affiliate commission.
Our Pick

With its compact size and lightweight build, the Bose SoundLink Revolve is easily the portable Bluetooth speaker deserving of the distinction. It has a water-resistant construction and grip-friendly texture. Add in its top and bottom shock-absorbing bumpers, and it’s clear that it’s the superior choice if you’re going to be bringing a speaker outdoors. Yes, it costs roughly half as much again as the Onyx 5, but it’s well worth it thanks to its excellent sound quality and longer battery life.

If you’re after a wireless speaker to fill up your living room, and want one that’s as beautiful as it sounds, the Harman Kardon Onyx Studio 5 will be more attractive. You’ll save quite a bit and still end with arguably the more premium looking device. Just remember that it’s going to be heavy carrying it around for too long, and you’d want to save some battery life by sticking to the middle volumes.

📌 Is Harman Kardon a good brand?

Part of Harman International, Harman Kardon manufactures speakers and soundbars known for their excellent build and audio quality. If you’re using an ASUS, Dell, or Lenovo laptop, check the speakers as they might be made by Harman Kardon as well.

📌 Are JBL and Harman Kardon the same?

📌 Are Bose headphones and speakers made in America?

Bose is headquartered in Massachusetts, but it has manufacturing facilities in the US, Malaysia, China, and Mexico.

📌What is the best Bose speaker?

The and its 360-degree sound is the best portable speaker by Bose.

RELATED  Bose Noise-Cancelling Earbuds 700 vs AirPods Pro (2021): Should You Wait?