Sonos has long dominated the premium soundbar market ever since they released the Playbar back in 2013. It’s one of their best-reviewed products to date, and you only need to look at how long it’s been available to see its success. Rising to challenge the status quo is Bose, whose Soundbar 700 aims to be the new favorite for upgrading your home entertainment experience. We pit these two head-to-head to showcase what the new challenger offers and where the reigning soundbar is still ahead. 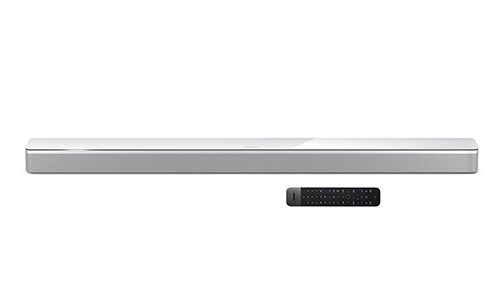 Designed to be the the world's best soundbar, the Bose Soundbar 700 features exceptional sound and minimalist design to bring a full audio experience in your home entertainment. Comes with built-in voice control.

Building on their recognizable aesthetics and the success of their SoundTouch 300, the Bose Soundbar 700 retains the same formula of combining top-notch materials into an elegant design. It has an aluminum grille over the drivers topped by tempered glass, and it’s intended to be placed right below your TV. It’s longer than the Sonos Playbar though so it can look oversized for TVs less than 50 inches.

Only two touch-sensitive buttons can be found on the top of the Soundbar 700 — an action button and another to mute the mic. A strip of white on the front panel will light up if you talk to Alexa or use the remote control, and at the back are all the connectivity options. The lack of other visual indicators on the unit itself might be an issue for those who want to easily check source and volume, but it can also be considered an unnecessary distraction. Overall, its clean design blends perfectly with contemporary living rooms.

While the Sonos Playbar can also fade into the rest of your TV setup, it still looks good enough to stand out, especially when wall-mounted. It has a soft fabric over its speaker with an aluminum finish everywhere else. Though it’s a bit thicker and taller than the Soundbar 700, its slim profile is still designed to make it fit in front of the TV. Actual physical buttons to play, pause, and control volume are located at its side panel, while it has even fewer sockets grouped up in the back.

Ultimately, both look as premium as their price indicates, but the Bose Soundbar 700 does seem more modern since it’s been just released.

The Bose Soundbar 700 has an easier setup and comes with a remote control than the Sonos Playbar.

Setting up the Soundbar 700 is fast and smooth, and should only take you roughly 15 minutes to finish. Once you connect it to your TV, you’ll be asked to download the Bose Music app. This will walk you through the entire setup and calibration process, including connecting to the Soundbar as well as any other modules you might use with it. It’s highly recommended that you go through the ADAPTiQ step, as it will configure the device to use the best sound settings depending on where you’re sitting. Connecting to Wi-Fi and enabling Alexa is also simple – you just need to log into Amazon. After this, you can rely on the included universal remote control to switch all your home entertainment devices on or off, even your gaming console. 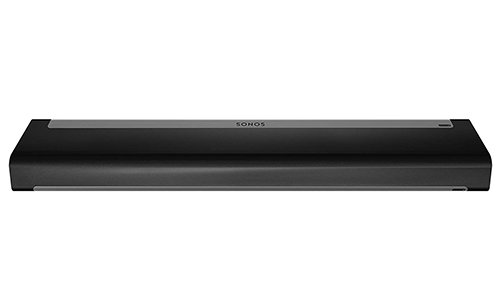 The Sonos Playbar is one of the most highly-reviewed soundbars ever released by the brand. Enjoy powerful bass along with crisp dialogue with its wall to wall sound. Wireless and mountable setup.

Check Price at Amazon Check Price at Sonos.com
We are reader supported. When you buy through our links we may earn an affiliate commission.

In contrast, there’s an extra step to the Sonos Playbar setup — you’ll need to first directly plug it to your router or use a Sonos Bridge to connect it to your wireless network. After which you’ll need to download the Sonos app, and tell it how it will communicate IR signals to your TV. This is a bit simpler on the Soundbar 700 since it has an ARC-HDMI port, which the Playbar lacks. Once you’ve fully gone through the setup wizard, you can use the Sonos app to control the soundbar and your TV. It will integrate other music sources such as Spotify into its interface, which by the way is looking pretty old at this point.

The Bose Soundbar 700 has more connectivity options than the Sonos Playbar.

Connectivity-wise, the Bose Soundbar 700 has everything you might need. It has both Alexa and Google Assistant built-in, and with an 8-mic array spread across its length, it can pick up your voice from anywhere in the room. It has Apple Airplay 2 support so you can stream Apple Music. You can use Bluetooth to stream music from other services, and there’s also a USB 2.0 port where you can plug in external storage devices directly.

Included with the Soundbar 700 is a programmable universal remote control, making it a very convenient way to operate both your TV and soundbar. The buttons light up depending on what mode you’re using the Soundbar on, so if you’re watching TV, non-related controls will look hidden. There’s the occasional hiccup that’s common in universal remotes, but it’s serviceable enough.

In comparison, this is one area where you’ll feel the Sonos Playbar’s age. There’s no remote control, HDMI, ARC, Bluetooth, USB, or built-in voice control. At the back are just two Ethernet ports, the power socket, and the optical audio input. It can work with Alexa but you’ll have to purchase and setup an Echo device separately.

The Bose Soundbar 700 has a rich sound, with very clear and precise vocals. Even without adding the wireless subwoofer unit, it still delivers rich bass sufficient for a good movie watching experience. While it lacks support for Dolby ATMOS, it’s practically negated by the bar’s punchy delivery of a wide and rich sound. Inside a closed room, sound felt as if it bounced off walls, and audio separation was distinguishable. To top it off, we also found that the adaptive tuning system feature brings it to a whole new level of sound reproduction. It’s safe to say that Bose once again delivers on its promise to provide a top end modern soundbar for both music and movie experiences.

The Sonos Playbar uses six mid-range drivers across its length and three tweeters, two of which are positioned at 45 degree angles at both ends to deliver audio in as wide an area as possible. This setup lets it produce highly detailed sound that permeates the entire room, and both music and dialogue comes out crisply. It creates a deep and dynamic soundstage that gives all you need in a single speaker setup.

While its bass is impressive given its fabric finish and acoustic suspension build, it doesn’t quite reach the lower bass levels that really makes you feel ground-thumping movie explosions for example. However, the Playbar’s sound quality is full-bodied enough that you really don’t need a subwoofer unless you’re extremely discerning or you just want a full 5.1 surround sound for your home entertainment system.

The Bose Soundbar 700 receives our recommendation over the Sonos Playbar.

Designed to be the the world's best soundbar, the Bose Soundbar 700 features exceptional sound and minimalist design to bring a full audio experience in your home entertainment. Comes with built-in voice control.

Check Price at Walmart Check Price at Amazon
We are reader supported. When you buy through our links we may earn an affiliate commission.
Deal Finder

The Sonos Playbar is one of the most highly-reviewed soundbars ever released by the brand. Enjoy powerful bass along with crisp dialogue with its wall to wall sound. Wireless and mountable setup.

Check Price at Amazon Check Price at Sonos.com
We are reader supported. When you buy through our links we may earn an affiliate commission.

In terms of sound quality, neither can really claim superiority over the other as they’re both top-notch. Where the Bose Soundbar 700 really comes out ahead is that it’s up-to-date with all the connectivity features you might look for to make it work well with everything else you have in your home entertainment setup. Ease of use is also improved with the addition of a universal remote as well as built-in voice control. If you’re looking to upgrade your living room with a premium addition that looks the part and sounds like it too, you’ll get better value from the Soundbar 700. It’s beautiful and functional, and its exceptional sound quality and numerous features justify its price tag compared to others in its range.

That’s not to say that the Sonos Playbar is inferior; it’s actually fantastic that it remains one of the best soundbars available today given how long it’s been in the market. However, software updates can only get you so far, and the lack of requisite ports like HDMI and wireless options like Bluetooth makes it less equipped for more current setups. Still, if you want a tried and tested device that’s satisfied thousands of owners, you can be confident that it’s money well spent on the Sonos Playbar.

The Bose Soundbar 700 has a better sound quality, less distortion at max volume, and supports more audio formats than the .

Currently, you can only connect up to two Bose Bass Module 700s to the Bose Soundbar 700.

📌 Is the Sonos Playbar worth it?

Yes, the Sonos Playbar have remained one of the most highly rated soundbars for years due to its excellent performance and audio quality.