Away’s research revealed that around half of Americans only use soft-sided luggage when traveling. As a result, the brand launched the “Expandables” line of soft-shell suitcases, giving travelers even more choices for their travel companion. Here’s our take on what the Away Expandable Carry-On offers that can make them the better choice over the company’s classic hard shells.

The Away Expandable Carry-On looks just as impressive as the hard-sided model.

At first glance it’s easy to tell that this is an Away suitcase, as the company knows how important visual consistency is for a budding brand that successfully entered the market with its innovative design. The Expandable Carry-On sports the same design details as the classic hard shells: clean lines, horizontal ridges, and a small logo at the top right of the front side.

Compared with the polycarbonate shell, the water-resistant woven nylon of the Expandable looks positively cuddly and smooth. Despite being more flexible, it manages to retain its shape nicely. One feature you’d definitely appreciate is the front pocket blending extremely well into the design. Its zipper runs along the entire front of the suitcase and opens gusseted so you can easily fit (and take out) items as large as a laptop.

RELATED  Away Aluminum vs RIMOWA (2020): Does a Higher Price Tag Mean Better Luggage?

The Away Expandable Carry-On can expand by 1.75 inches.

Now, for the biggest reason you’re likely getting the Expandable Carry-On: it can be expanded if needed. A second zipper beside the one for the main compartment can be pulled open to add another 1.75 inches to the suitcase’s depth, which should be enough for extra clothes or bulky objects. Plus, the flexible nylon material has more give to it too, so it’ll be easier to cram in than a hard shell.

Inside, the top half is a zippered compartment intended for shoes and toiletries, allowing them to be kept separate from clothes. The compression pad for the bottom compartment can do wonders in squeezing every bit of space, especially for fabrics that can be flattened tight. Of course, expanding the carry-on will likely mean that you’d need to check it in on most flights, so it’s recommended that you check airline requirements.

The Expandable Carry-On’s exterior can bend enough to withstand impact.

Like most soft-sided luggage, it can surprise many how much beating these can take without breaking. The Expandable Carry-On is made of similar stuff, so you can expect it to survive uncaring baggage handlers without falling apart. The flexibility of the woven nylon material allows it to bend sufficiently to mitigate impact. It’s also better at hiding minor scuffs than the hard-sided model.

Still, care must be taken not to spill liquids and other sticky substances on its exterior since it won’t clean as easily as polycarbonate. Moreover, it’s actually heavier than the standard Carry-On, which is simply due to how lightweight that hard shell material is. Maneuverability should be the same though, as it has the same suave spinner wheels and handle.

RELATED  Away vs Travelpro (2020): Which Expandable Softside Luggage Should You Get?

Note that you might prefer the hard shell models if you’re planning to pack fragile items such as laptops, DSLR cameras, glass bottles and such. The tougher casing and structure of those are better at protecting breakable objects.

The Away Expandable Carry-On is more flexible than the classic hard shell in more ways than one.

As mentioned earlier, there are many people who prefer soft-sided luggage over hard shell suitcases, and that won’t be different with the Away Expandable Carry-On. Its flexible exterior provides some extra breathing room inside while allowing it to be easily handled and slipped into tight spaces such as overhead compartments.

If you like to pack prepared or if you typically go shopping at your destination, you’ll love the additional space you get by expanding it, even though you’ll probably have to check it on the flight home. The easy-access front pocket lives up to its name, and it’s definitely handy if you tend to take your carry-on along with you. Finally, the soft-sided exterior does a better job of brushing off scratches and scuffs, so you’ll have a stylish suitcase looking new much longer than the original Away Carry-On.

From the latest Away aluminium carry-on luggage to the biggest expandable suitcases, here at Compare Before Buying we geek out on everything packing and travel related.

Save on Away Luggage 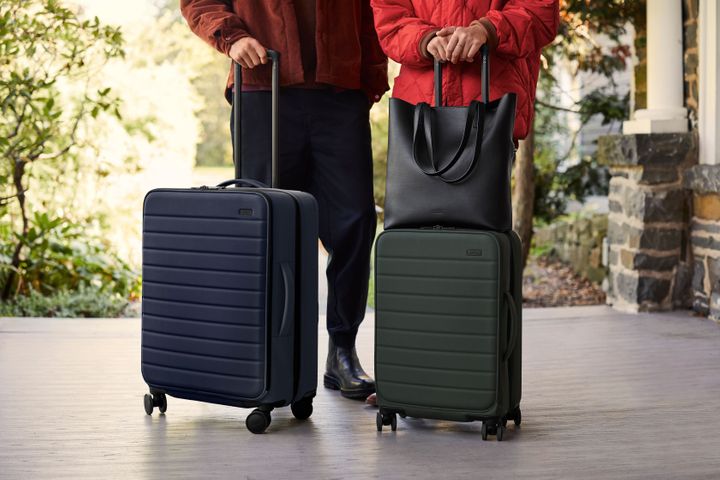 Save up to $100 on sets of Away Luggage carry-on and checked suitcases.
Get This Deal