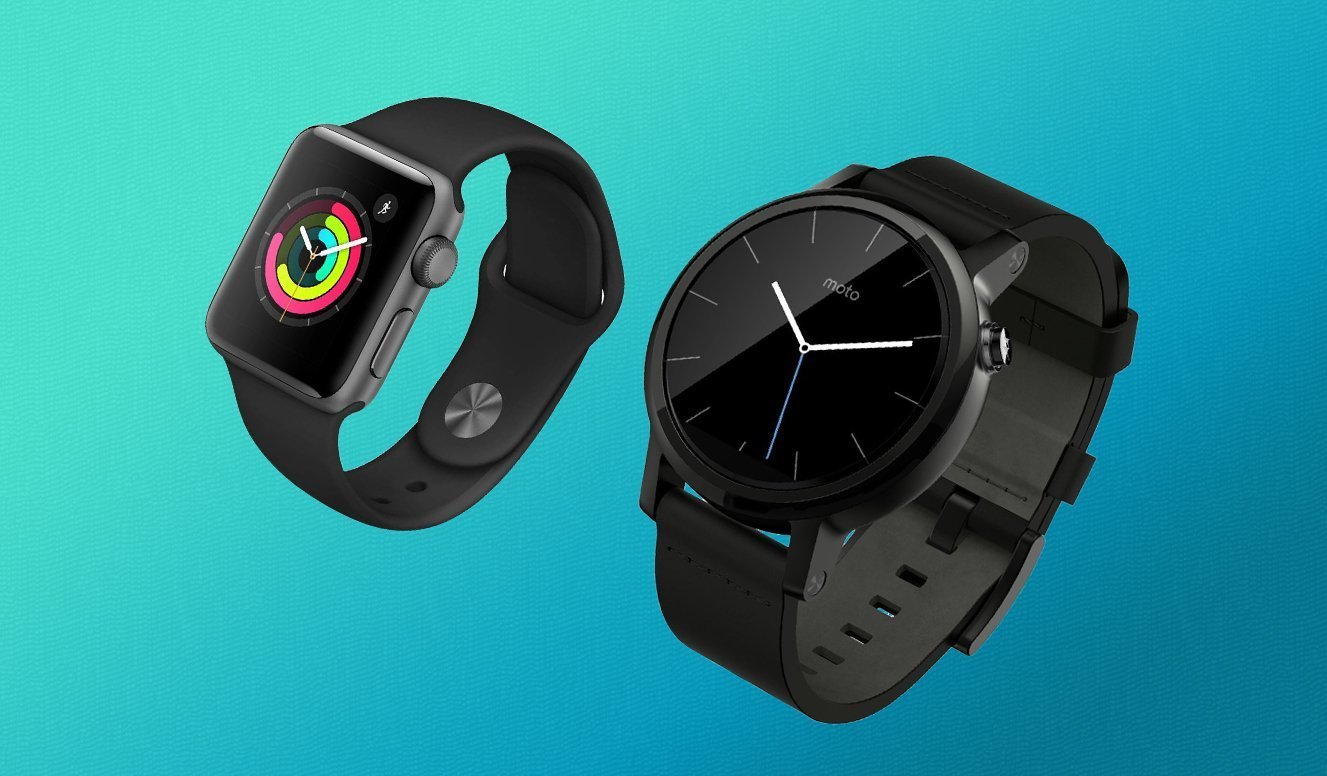 The and Motorola Moto 360 2nd Gen are both stylish devices with a lot of features hiding behind their watch faces. Previously, each company’s smartwatches were platform-limited — you could only use the Apple Watch with iOS and the Moto 360 with Android. But now that the 2nd Gen’s Android Wear can be used with iPhones, the competition got a lot closer. We take a deeper look at each of these smartwatches to help you decide which to go for.

The Apple Watch has a modern style; the Moto 360 has a classic look.

Right off the bat, the rectangular Apple Watch and the circular Moto 360 will appeal to different crowds. Depending on your sense of style, you’ll likely find that one looks better than the other, so this is a subjective aspect. Their sharp, bright displays both make them easy to view and pretty to look at.

The larger sizes and thinner bezels of the Moto 360 2nd Gen does give it a bigger screen, representing a 71.7% display-to-body ratio. In comparison, the Series 3 only has a 49.1% display-to-body ratio, but its AMOLED display makes it sharper and more vibrant. Since smartwatches have small screens anyway compared to phones, the difference in their pixel density might not matter too much.

The Apple Watch has better activity tracking than the Moto 360.

Overall, you’ll be able to see and record fitness data with the . Though both devices can track your steps, heart rate, and calories burned, the Series 3 also has a barometric altimeter to track elevation and a built-in GPS to record the distance you’ve traveled and the route you took. Since it’s also waterproof up to 50 meters, you can even count how many strokes you made while swimming. It can even auto detect and start recording your activity so you don’t have to manually record it later.

One more difference those with an active lifestyle might consider is that the Moto 360 can only be controlled with taps and swipes on its touchscreen. This could make it a bit more difficult to use when your hands are damp from sweat, for example. The addition of a digital crown on the side of the Apple Watch makes it easier to fully control, and your finger won’t get block the view either.

The Apple Watch has a cellular option.

Both Series 3 and Moto 360 have Wi-Fi and Bluetooth, so they can automatically sync your fitness data with your phone. You’ll also be able to get more apps to do even more things with your smartwatch, and there are plenty available in both the App Store’s watchOS section and Google’s Android Wear. If you want to make wireless payments, you’ll only be able to do it with the Apple Watch though, as it has NFC and Apple Pay.

The biggest advantage the Apple Watch has over the Moto 360 is that the Series 3 comes in a GPS + Cellular model. Having cellular capabilities mean you can leave your iPhone while going out for a jog, and still be available for calls and texts. You also don’t have to get another phone number for it anymore — it uses an e-SIM so it will have the same one as your iPhone’s.

The Moto 360 works with both iOS and Android devices, and lasts longer without recharging.

If you’re a devoted Android user, your choice here is pretty limited: you’ll either have to pick the Moto 360 or buy an iPhone in order to use the Apple Watch. However, the choice is more interesting if you already have an iPhone, since Motorola made its 2nd Gen smartwatch compatible with iOS.

You’ll be able to get more out of a single charge with the 300mAh battery of the 42mm Moto 360, compared with the 273mAh of the 42mm Apple Watch. This translates to about 1.5 days of mixed use versus 18 hours, meaning you will need to charge your Apple Watch every day. The bigger 46mm Moto 360 has an even bigger battery which can give up to 2 days of use.

The Apple Watch has the edge over the Moto 360, unless you prefer a classic look on your timepiece.

With more activity tracking sensors and features, a built-in GPS, water-resistance, and arguably smoother UI, the offers so much value that you’ll feel it’s worth every additional dollar it costs. If you’re willing to shell out even more, the GPS + Cellular model will give you an even more complete mobile experience than the Moto 360 ever could.

However, there’s no denying that the classic circular display of the Motorola Moto 360 2nd Gen will appeal more to those who prefer the look of a traditional timepiece, especially when you use a leather band with it. You’ll be able to track your activities longer without recharging, and the simpler interface and notifications may actually help you focus more on working out. Needless to say, if you wish to stick with Android, the Moto 360 is a great choice indeed.