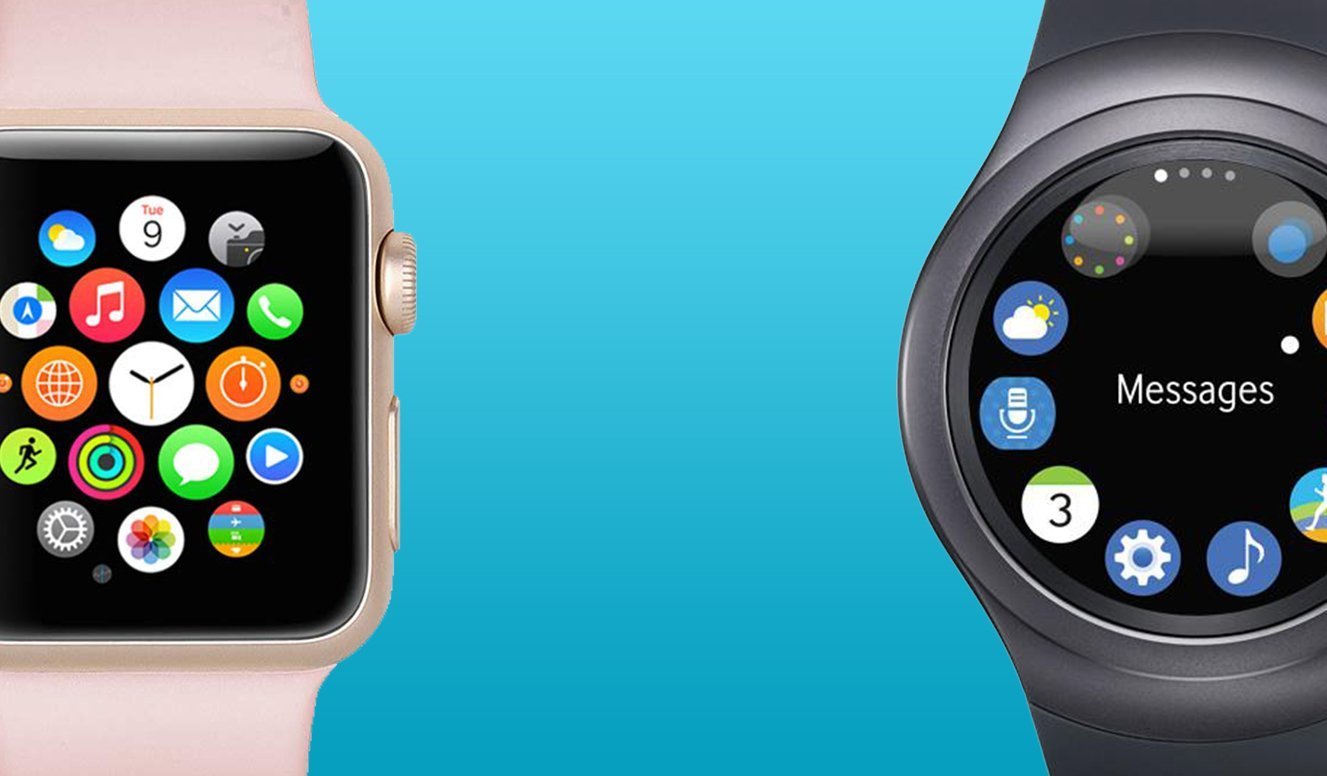 Even though Samsung has been in the smartwatch longer than most tech companies, it wasn’t until the release of the Samsung Gear S2 that they gave the relative newcomer Apple some serious competition, whose Apple Watch Series 2 gave them continued dominance. But is either device actually better than the other?

The Apple Watch is larger, but the Gear S2 is easier to navigate.

Both smartwatches integrate elegant proportions and minimalist designs into gorgeous devices, and they are lightweight enough to be comfortable to wear for long periods of time. Which design looks better depends strictly on your own preference, as they both look sophisticated and smart indeed. The display of the Apple Watch is larger than the Gear S2, at 1.6″ vs 1.2″, but they have the same pixel density and AMOLED technology, resulting in sharper details.

A more interesting comparison is the input and navigation available on each device. The Apple Watch has a force-sensitive capacitive touchscreen, similar to the trackpads on MacBooks, as well as a unique new method of input with the digital crown. This makes it easy to navigate menus, zoom in and out, and make selections within its different apps.

Not to be outdone, the Samsung Gear S2 has something similarly unique: they made the entire bezel of the display a giant, rotating scroll dial. Like the digital crown, it allows you to control the smartwatch without your finger blocking the display, an important consideration given the smaller screens. The new input mechanisms work perfectly with the overall interface of their devices, but the larger size and better positioning of the scroll dial makes it more ergonomic and easier to access than the digital crown, which is located to the side.

The Apple Watch is a better fitness tracker.

Each smartwatch has the basic fitness-related sensors — optical heart-rate monitor, accelerometer, and gyroscope — as well as a suite of apps that will allow you to keep track of your activity levels, reach your exercise goals, and monitor your health. The Gear S2 additionally has a barometer to track your elevation data, but the Apple Watch has an internal compass for navigation and a pedometer to count your steps.

The bigger difference is that the Apple Watch has built-in GPS and GLONASS, letting you track your location and route during runs. To get the same functionality on the Gear S2, you’ll have to get the pricier 3G model. Another activity you can keep better track of with the Apple Watch is swimming. Though both are dust-proof and water-resistant, the Apple Watch is actually waterproof up to 50 meters and has a stroke counter, making it the better swimming companion.

The Gear S2 has a 3G-enabled version.

The Samsung Gear S2 has a slightly faster 1GHz Exynos 3250 dual-core processor, compared to the Apple Watch Series 2’s 780MHz S2, though both still provide a responsive app experience. They both have Wi-Fi, Bluetooth, and NFC, but the Gear S2 has the edge on connectivity, as it comes in a 3G model. You’ll be able to leave your phone behind and stay connected to the internet, and get the GPS functionality that the non-3G models lack.

The addition of a microphone and speaker on the Apple Watch lets you answer calls and listen to music by itself, while you’ll need to pair the Gear S2 with Level U Bluetooth headphones to enjoy your music. In terms of customization via apps, both offer a deep portfolio of supported apps via the App Store and Google Play, but you’ll have a lot more space with the Apple Watch as it has an 8GB internal storage compared to the Gear S2’s 4GB.

The Gear S2 has a slightly longer battery life and works with both iOS and Android.

The Apple Watch uses the watchOS platform so you’ll only be able to use it with an iPhone 5 or newer. The Gear S2 uses the Tizen platform which works with all Samsung devices and other phones sporting Android 4.4 or newer. However, later updates gave the Gear S2 compatibility with iOS devices as well, so iPhone owners at least have a proper choice.

Battery-wise, the Gear S2 can last a bit longer than the Apple Watch, although actual longevity depends heavily on how much you use each device. Since neither can last more than 24 hours without recharging, you’re likely to take them off every night and place them on their wireless charging docks anyway.

Both are equally great smartwatches, so your phone will actually make your choice for you.

Neither the Apple Watch Series 2 nor the Samsung Gear S2 has enough of an advantage over the other to be clearly labeled the better smartwatch. Although the Apple Watch has a few more sensors and tracking features, you can improve your fitness level and stay just as active with the Gear S2. The larger, crisper display of Apple’s is countered by the better control afforded by Samsung’s novel scroll dial. You can also customize both watchfaces and bands in whichever style looks better for you.

The phone you’ll use your smartwatch with actually provides a heavier weight if you’re choosing between the iOS-only Apple Watch or the Gear S2. iPhone users will welcome the addition of a new device that further entrenches them into Apple’s ecosystem, while Android users will be glad that they have an excellent smartwatch choice that can compete handily with Apple’s.