Apple’s new Watch Series 6 is now officially its best smartwatch with the most advanced health features so far. It has a few but significant improvements here and there over its predecessor, the Watch Series 5, including a brighter display and blood oxygen sensing, to name a few.

However, that doesn’t automatically mean it’s the only Apple Watch everyone should get now. After all, the Watch Series 5 can still get the job done, and then there are the inevitable price drops. That said, we’re here to help you decide if you should get the new and shiny Watch Series 6 or if you’re better off saving your hard-earned money.

Right off the bat, the Watch Series 6 has the new S6 System-in-Package that’s 20 percent faster than the Watch Series 5’s S5 processor. That means apps will launch faster and animations will be smoother, at the very least. Speaking of, it’s also the first Apple Watch with a U1 ultra wideband (UWB) chip, which can detect the location of other nearby UWB devices.

One of the most welcome additions is its always-on display that’s 2.5 times brighter, making it more visible outdoors even in sunlight. Battery life is still the same at 18 hours on a single charge despite that. At the time of writing, it’s unclear why that is, but it could be for any reason—a bigger battery, more power efficient processor, power-saving software, or a combination of any of them.

Charging is still a wireless affair, and the Watch Series 6 is compatible with previous models’ charging stands, which is a good thing since Apple won’t be throwing in a charger anymore. That may have ended on a sour note, but the Watch Series 6 does fully charge in 1.5 hours. It’s faster compared to the Watch Series 5, which takes two hours, so there’s that. 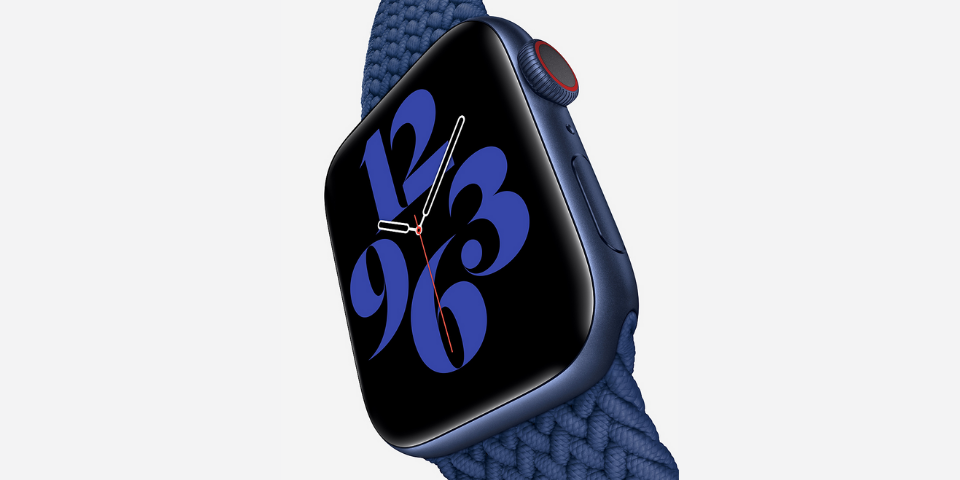 Now the move from the Watch Series 4 to the Watch Series 5 saw an increase in capacity from 16 GB to 32 GB. That paved the way for more songs and podcasts stored directly in the wearable. The Watch Series 6 retains the 32 GB storage space, so there’s nothing new to see here.

As for the casing, the Watch Series 5 came in aluminum, ceramic, stainless steel, and titanium. The Watch Series 6 will be available in the same options, except for ceramic.

In terms of colors, it’s a different story. The Watch Series 6 now comes in blue and (PRODUCT)RED, besides the standards such as Space Gray and Silver, among others.

You can keep tabs on your health better with the Watch Series 6.

This is where the Watch Series 6 really shines. While both use Apple’s second-generation optical heart rate sensor and electrocardiogram (ECG) technology, the new model builds on its predecessor with a blood oxygen sensor. Basically, it uses a mix of green, red, and infrared LED lights to measure your blood oxygen levels. Getting a reading takes only 15 seconds, and it can come in really handy for those who have heart or respiratory conditions. Moreover, it captures measurements periodically in the background, even while you’re asleep.

Now the Watch Series 6 is powered by watchOS 7 from the get-go, and the updated software brings native sleep tracking, VO2 max sensing, handwashing detection, and new workouts, such as Dance and Core Training. The Watch Series 5 is upgradable to the latest version too, which effectively breathes new life into the wearable.

One improvement that hikers or climbers will likely be delighted to see is the always-on altimeter. Thanks to this, they’ll get altitude info in real-time.

Elsewhere the two are pretty much the same, from the Activity rings to things like emergency SOS and automatic fall detection.

There’s a new strap in town called Solo Loop. It’s a single, seamless band, meaning there’s no buckle or clasp at all. It’s available in either stretchable silicone rubber or braided silicone threads, and there’s up to nine sizes and a variety of colors to choose from, so you’ll likely find one that’ll fit the bill.

More on the design front, the Nike bands are getting updated with new color options, and new Hermès bands are in the mix too, such as the Attelage Single Tour.

The takeaway here is you’ll have more choices to make the wearable presentable for just about any occasion.

The Cupertino brand keeps its pricing strategy for the Watch Series 6.

The Watch Series 6 begins at $399, the same starting price point of the Watch Series 5 when it first launched. To be clear, that’s for the 40 mm GPS-only model with an aluminum casing. Also, the same as before, adding cellular capability will up the total cost by $100.

Depending on the size, accessories, and casing materials, prices can go all the way up to $1,499. That’s not really surprising since the Watch Series 5 did top out at $1,749.

To sum things up, the main advantages of the Watch Series 6 is its 20 percent speedier processor, UWB chip, 2.5 times brighter display, faster charging time, blood oxygen sensor, and always-on altimeter. That said, it’s clearly the better smartwatch here, but even then, it’s hard to recommend upgrading from the Watch Series 5. Sure, the improvements are nice to have, but overall, they don’t really make a strong case to trade up. Besides, the older model is getting up to speed in a few key areas with watchOS 7, and in a way, it can offer an experience somewhat comparable to what the new flagship can.

At any rate, the Watch Series 6 is by all means a worthwhile buy for a new user. On the other hand, there’s also good news for those on a budget since price drops for the Watch Series 5 should start trickling in soon.

📌 What’s the difference between the Watch Series 6 and 5?

The Watch Series 6 is Apple’s latest smartwatch yet. Compared to the Watch Series 5, it’s 20 percent faster with a display that’s 2.5 times brighter, a new blood oxygen sensor, an always-on altimeter, and a U1 ultra wideband chip, a first for Apple Watches.

📌 Is the Watch Series 6 worth the upgrade?

Not really, especially if you’re coming the Watch Series 5. While the Watch Series 6 builds on its predecessor on a lot of fronts, the improvements don’t seem to be significant enough to warrant for an upgrade, unless the new blood oxygen sensor, brighter display, and faster performance really matter to you.

📌 Is the Watch Series 6 worth getting?

Yes, the Watch Series 6 is definitely worth the buy. Not only is it 20 percent faster than its predecessor, but it also comes with a brighter display and a new blood oxygen sensor, among other things.

📌 Is the Watch Series 5 still worth getting?

Yes, the Watch Series 5 is still worth the buy, especially since the new watchOS 7 update gives it a new lease of life with features such as native sleep tracking and new workout types. On top of that, Watch Series 5 price drops should start rolling out soon with the arrival of the new Watch Series 6 and Watch SE.