The Apple Watch is arguably the most popular smartwatch in the market today. It also offers one of the largest displays for a digital timepiece. With the Series 4 and Series 5, Apple introduced new standard sizes for the watches: the 40mm and the 44mm. Both models offer 30% more screen real estate compared to their counterparts in the Series 3. Except for their dimensions, the Apple Watch 40mm and the 44mm are also essentially identical, packing the same hardware and software features.

Given the seemingly negligible difference between the two, which Apple Watch fits you? Here, we compare Apple’s latest smartwatch models and take a look if there is more than meets the eye.

Check Price on Amazon Check Price on Verizon
We are reader supported. When you buy through our links we may earn an affiliate commission.

The Apple Watch 40mm and 44mm are identical smartwatches packed with the same features.

Design wise, nothing separates the Apple Watch 40mm and 44mm. It still comes in its iconic frame, with a large display adorned by the instantly recognizable digital crown. Both are premium devices made up of 100% recycled aluminum, and which come in three finishes: silver, space gray, and gold.

Underneath the metal and glass, the Series 5 boasts of a dual-core S5 chip that’s behind the core fitness, health tracking, and connectivity features of the smartwatch. The two Apple Watch models are highly capable and functional devices that include among others a compass, accelerometer, GPS, a second-generation heart-sensor, and an industry-pioneering electrical heart sensor. All of these run on the watchOS 6.0.

You certainly won’t get less with the 40mm and more with the 44m; across the board, the features are all the same.

The 44mm comes with a larger display and pixel count over the 40mm, although the difference in quality is negligible.

What truly sets the two apart is their sizes. The 44mm brandishes a 977 sq mm display area, compared to the 759 sq mm of the 40mm. This also translates to the bigger Apple Watch having more pixels. In terms of quality, however, the difference in pixels is hardly visible to the naked eye since the two come with a Retina display anyway.

Of course, those with large fingers may find the 44mm easier to operate. Given more screen real estate, you’ll also notice that content is better fitted to the larger Apple Watch compared to the 40mm which tends to cut off or hyphenate text. If you’re someone who needs to squint to read, then the 44mm might be more practical especially since you’ll spend less time swiping and scrolling when reading notifications or toggling features.

Check Price on Amazon Check Price on Verizon
We are reader supported. When you buy through our links we may earn an affiliate commission.

In choosing between the 40mm and the 44mm, Apple has a recommended size guide for the best fit.

At the end of the day, choosing which Apple Watch you’ll get greatly depends on its fit. And it’s not as simple as saying the larger watch is for men, while the smaller variant is for women. People come in all shapes and sizes, and men with skinny wrists might prefer the 40mm in the same way some ladies may gravitate towards the bulk and fit of the 44mm better.

Apple itself recommends the larger watch for people with a wrist size between 140mm to 210mm. On the other hand, the smaller model is better suited for wrists measuring 130mm to 200mm. Essentially, it will all come down to how a particular model feels when you wear it. The 40mm, which is slightly lighter than the 44mm, might feel more comfortable even for those with typically larger wrists. For some people, the 44mm’s longer straps will feel a lot more natural and ergonomic. 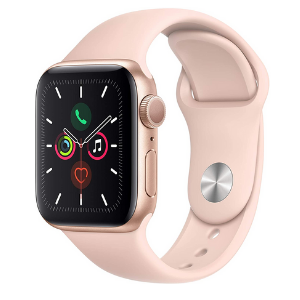 Packed with the same features as its bigger 44mm sibling, the Apple Watch 5 40mm model is perfect for users with a smaller wrist. Comes in gold aluminum and silver aluminum case options.

Both models of the Apple Watch can be customized with an array of straps.

Speaking of straps, even though you only get two sizes for the Apple Watch Series 5, you will enjoy a ton of options when it comes to the straps. Keep in mind, however, that some of these bands may only be available for either the 40mm or the 44mm. Stainless steel straps like the Milano Loop and the Link Bracelet both work for the 40mm and 44mm Apple Watch. Similarly, sport bands like the Nike Sport Loop, Nike Sport Band, and the standard Apple Sport and Loop Bands are compatible with the two sizes.

If you’re opting for something more lavish, then straps from Hermès should appeal to you. The Leather Single Tour, for example, carries the classic Hermès design in plush Swift or Epsom leather as well as a variety of colors. Although the Single Tour is compatible for both 40mm and 44mm, some of the color variants are size-specific. Strap models may also only work for one model. The Deployment Buckle option, for example, is made for the 44mm while the Hermès Leather Double Tour, which wraps around your wrist twice, is available only for the 40mm watch.

With the array of bands from Apple, Apple partners, and the third party strap market, this could influence your choice of Apple Watch.

The Apple Watch 40mm and 44m are the same device, packed with the same features, and designed to suit a particular wrist size.

Check Price on Amazon Check Price on Verizon
We are reader supported. When you buy through our links we may earn an affiliate commission.
Deal Finder

Packed with the same features as its bigger 44mm sibling, the Apple Watch 5 40mm model is perfect for users with a smaller wrist. Comes in gold aluminum and silver aluminum case options.

The Apple Watch Series 5 40mm and Series 5 44mm are essentially the same device. Apart from size difference with the case and display, the two share the same hardware and software features. Both were specifically designed to fit a particular wrist size—the 40mm for smaller wrists, the 44mm for larger ones. But this doesn’t mean that you’ll choose one over the other based on that factor alone.

With its larger screen, the 44mm is definitely easier to operate and read. Depending on how you use your watch, however, you may not be spending a lot of time reading through notifications with it, so the smart features will come out just as fine with the 40mm variant. At the end of the day, choosing between the Apple Watch models will come down to two things: how it feels on your wrist, and how it looks. Again, it’s a watch and you’ll be wearing it. Given that they share the same capabilities, opt for the model which offers the most comfortable fit, and which you feel looks best on you.

📌 What are the available colors for the Apple Watch 40mm and 44mm models?

You can get the Apple Watch 40mm and 44mm in silver, space gray, and gold.

📌 Can a woman wear the Apple Watch 40mm?

Most women will wear watches between 36mm to 40mm, with the latter being the perfect oversized fit. While the Apple Watch 40mm is the recommended size for women, your choice will still largely depend on your actual wrist size and your preferences.