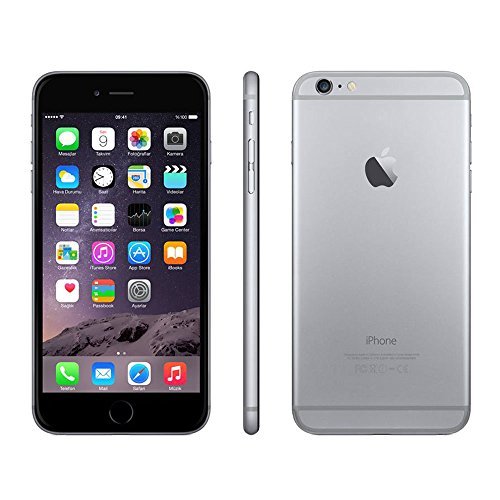 Apple iPhone 6 is a powerful phone released in September 2014, which counts with a high-tech 64 bit Dual-Core processor running at 1400 MHz, a 4.7 inches multi-touch screen, and two cameras, an 8 mega-pixels back facing camera and a 1.2 mega-pixels front-facing camera. But let’s get into much more detail.

Apple ships this phone with an exceptional 64 bit Dual-Core processing unit speeding at 1400 MHz, included in the Apple A8 system chip with only 1 GB RAM memory which is a little bit low for such a good cellphone. To help with graphic rendering, it also has a 450 megahertz PowerVR GX6450 GPU. A good advantage of this cellphone is its 16 GB quite large internal storage memory and even though it doesn’t include an SD card slot, it should be enough to store a couple hundred apps and games, although it might not be enough if you are fan of the heaviest games currently available.

Though this cellphone just has 5.44″ long and 2.64″ wide, it’s able to fit a a 4.7 inches display. This cellphone is very thin and stilized, with a thickness of just 0.27 inches. This phone is much lighter than what you expect from a phone like this. Apple sells this cellphone in two color options, gray and gold. This device design uses Aluminium, Steel and Glass, which gives it a top level design.

This cellphone features two cameras, an 8 MP back camera and a 1.2 megapixels front camera. the iPhone 6’s back camera lens has a maximum f/2.2 aperture so it can take very nice photos even in poor lighting situations. It is also able to capture 1920×1080 Full HD videos at 60 fps, and HD 1280×720 slow-motion videos at 240 fps (8 times slower than reality). In addition, the camera counts with a high number of useful characteristics: flash, fast burst mode, auto-focus, face detection shooting, digital image stabilization, HDR mode, time lapse video and geo tagging.

This cellphone includes an astonishing 4.7″ display with a 1334 x 750 resolution, making everything look beautiful and brightful. This display uses IPS LCD capacitive technology, with a brightness of 500 candela/m2 and has multi-touch detection.

The iPhone 6 has wifi capability (which can be provided to other devices around, acting as a router), 4G (LTE) high performance internet connection or fast 3G connectivity, over HSPA, HSUPA, UMTS, EV-DO A, EV-DO B and EDGE technologies. This phone uses a Nano SIM card to connect to GSM networks and it can connect using both GSM and CDMA networks.

This device comes with a 1810 mAh medium sized Li-Ion non-removable battery that can keep it running for some hours, but you may need to charge it even after moderate use. Apple reports a 250 hours stand by time and a 14 hs talk time for this cellphone. A big issue to take into account is that this device’s battery isn’t removable so you can’t buy a new battery when it starts to have trouble holding its charge, leaving no choice but to buy a new device.

If you will use this phone for work, need a cellphone to play games, want it mostly for social networks or love photography, this phone is a great choice for you. When you buy this cellphone you will also receive USB Power Adapter, Documentation, Lightning to USB Cable and Apple EarPods with Remote and Mic.