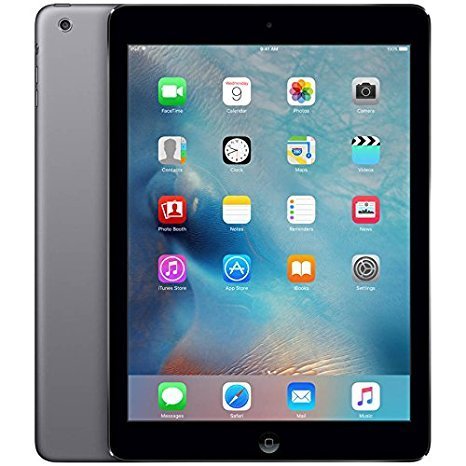 Air is a great tablet released many years ago, which counts with a huge 9.7 inches screen, a high-tech 1400 megahertz Dual-Core 64-bits processing unit, a 5 mega-pixels back facing camera and a 1.2 MP front camera.

About its design, this device is majorly made with Aluminium, which gives a top level design. This tablet just has 9.45 inches long, but it still manages to hold a 9.7 inches display. This tablet is incredibly slim and good-looking, being just 0.3 inches thick. Apple sells the iPad Air in 3 color options: black, gray and white. The iPad Air is much lighter than what one would expect from a device this size.

Apple packed the Air with a nice 9.7 inches display, and a 1536 x 2048 resolution, which makes it hard to distinguish the pixels that compose the display. Its display uses IPS LCD capacitive technology, and has multi-touch detection.

Apple decided to design the iPad Air using an exceptional 1.4 gigahertz Dual-Core 64 bits CPU, included in the Apple A7 system chip with only 1 GB RAM which is a bit poor for a tablet this good. Graphic rendering generally consume a lot of processing time, so it counts with a PowerVR G6430 graphics processing unit running at 600 MHz to improve overall performance. The iPad Air has a 32 GB great internal memory and though it doesn’t include a slot for SD memory cards, it it is more than enough to install lots of applications, games, photos and videos without worrying about how much storage is left.

This tablet also features some interesting features like Bluetooth, GPS (Global Positioning System) and NFC (to trigger actions, transfer data or make payments by holding your tablet close to another NFC device or tag), and multiple sensors like Light Sensor, Accelerometer, Gyroscope and Compass.

This tablet uses a big 8820 mAh Li-Polymer non-replaceable battery providing the iPad Air an amazing battery duration. An issue to take into account is that the iPad Air’s battery is non-replaceable so you can’t change it when it begins to last shorter, although with this big battery you will probably replace this device before that becomes a real problem.

No matter whether you need a tablet to mostly use social networks, are looking for a tablet for work, want a device to play games or you love taking photos, this device is a good choice . When buying this device you also receive USB Power Adapter and Lightning to USB Cable.