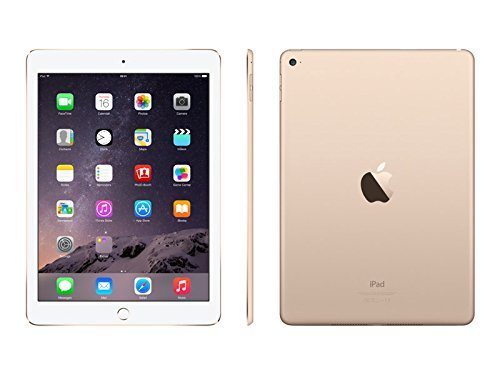 Being just 0.24″ thick,the iPad Air 2 is extremely slim and good-looking. This device only has 9.45 inches long, but it manages to hold a 9.7 inches display. Regarding its construction, this tablet is mostly manufactured with Aluminium, which gives a high quality finish and high resistance. This tablet is much lighter than what one would think about a tablet like this. Apple offers this tablet in 2 color options, gray and gold.

This tablet comes with a Apple A8X system chip, backed up by a fast 1500 MHz 64-bits processing unit and a big 2 GB RAM. The Air 2 counts with a 64 GB huge internal storage memory and even though it doesn’t count with an external memory card slot, it it is more than enough to store lots of apps, games, songs, pictures and videos without having to worry about how much memory is left.

Apple equipped this tablet with a good level 9.7″ display, and a 2048 x 1536 resolution, which makes it hard to distinguish the pixels taking part of the display. Its display uses IPS LCD capacitive technology, and is multi-touch enabled.

This tablet has two cameras, an 8 mega-pixels back facing camera and a 1.2 mega-pixels front facing camera. This device also films 1920×1080 Full HD videos at 30 frames per second, and HD 1280×720 slow motion videos up to 120 frames per second. To complete the camera, it also has a large number of cool features like auto-focus, fast burst mode, face detection shooting, digital image stabilization, time lapse video, HDR mode and geo tagging.

The Air 2 also features many interesting features like Bluetooth (4.0), Fingerprint ID, GPS (Global Positioning System) and NFC (to trigger actions, transfer data or make payments by holding your tablet close to another NFC device or tag), and multiple sensors like Light Sensor, Accelerometer, Gyroscope and Compass.

The Air 2 comes with an amazing 7340 mAh non-replaceable battery providing this tablet an incredibly long battery life. An issue to consider is that this tablet’s battery is not replaceable so you can’t buy a new battery when it starts to get older, though with so much capacity you will probably discard this tablet before it becomes an issue.

No matter whether you want this tablet to take lots of pictures, need a tablet to play games, are looking for a work tablet or will use it as a social tablet, this tablet is the correct choice for you. When you buy the iPad Air 2 you will also get Lightning to USB Cable and USB Power Adapter.